The collection will bow for spring 2012 in conjunction with international children’s wear exhibition Pitti Immagine Bimbo in Florence in June. 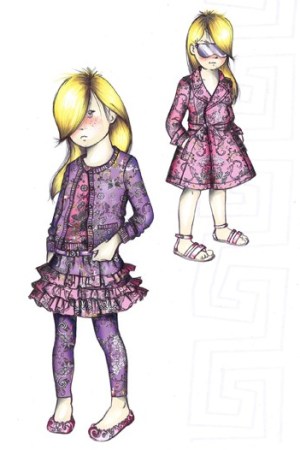 MILAN — Versace is launching a new children’s wear line under the Young Versace brand. The collection will bow for spring 2012 in conjunction with international children’s wear exhibition Pitti Immagine Bimbo in Florence in June, with an event held outside the fairgrounds.

“This is a high-end, glamorous and colorful collection in line with the brand’s essence, with a touch of rock ’n’ roll,” said Gian Giacomo Ferraris, chief executive officer of Versace SpA. The label’s iconic symbols, such as the Greek frieze and the Medusa, will be reinterpreted with a sense of irony and fun prints in natural fabrics.

Young Versace is aimed at children from infancy to age 12. A previous children’s line, called Versace Young, was discontinued in 2004.

Ferraris described Young Versace as a “full collection,” which complements Versace’s product offer, and will be produced in-house. “Donatella Versace strongly supports and is behind the project, we have a state-of-the-art technological platform and supply chain, and we directly manage our core business,” he said, referring to the Novara, Italy-based plant.

In five years, the executive said he expects the line to have 200 stockists and wholesale sales of 30 million euros, or $43 million at current exchange rates. “We are also finalizing our own store concept,” he said, adding the collection will be available in Versace’s existing stores as well.

The company is reaping the rewards of the extensive restructuring plan set in motion by Ferraris in 2009. While the Italian luxury house expects to return to the black in 2011, as per its business plan, it posted a gain in revenues and earnings before interest, taxes, depreciation and amortization (EBITDA), and substantially slashed its debt, in 2010.