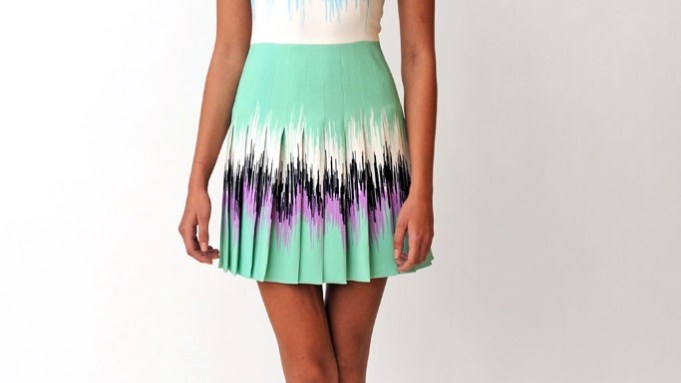 MILAN — Versus bows at Versace’s historic Via Gesù headquarters here Sunday, marking the company’s drive to turn the collection into a distinct and relevant brand.

“This is the first [Versus] show at the palazzo since we’ve taken production in-house, it’s like the birth of a baby or a first day at school,” said Versace chief executive officer Gian Giacomo Ferraris. Earlier this year, the company bought back the Versus license from Swinger International SpA. Ferraris is proud of Versace’s integrated production platform in Novara, Italy, and the spring 2012 season is the first produced in-house.

The ceo said the company is taking the line back to the fundamentals established by house founder Gianni Versace.

“The line will give a boost to the firm, and strength to grow,” he said. Retail prices range between 190 and 690 euros, or $260 and $944 at current exchange, making it more accessible, he added. The collection is aimed at a young customer looking for “a trendy, rock ’n’ roll” style.

Sales currently total 6 million euros, or $8.2 million. Ferraris plans to “at least” double this figure in 2012, and grow it fourfold in the next five years.

The company is also looking at turning what was a wholesale and franchised business into a more directly controlled one, investing in its own stores. Versus boutiques are scheduled to open in two key locations in 2012, Milan and London. There are two existing doors in Hong Kong and Las Vegas.

“I’m going back to my roots,” said Donatella Versace, whose first creative role at the family-owned firm was at Versus. She described the customer as a “different girl” who likes to “play, clash and contrast.”

Versace said the collaboration with Christopher Kane, who has been working with the designer on the line for five seasons, yields interesting outcomes. “I like to discuss. We have a totally different language,” she explained. “That’s how fashion’s done.”

“They are putting up a huge production for this collection,” said Kane about the show on Sunday. “Versus was always [Donatella Versace’s] baby, Gianni gifted her with it and I’m honored to be working on it.”