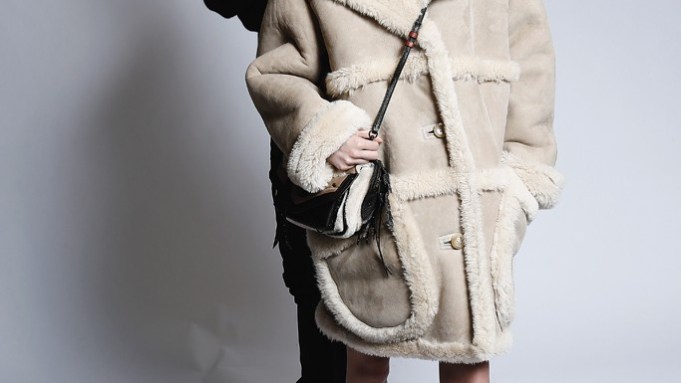 All eyes are on Stuart Vevers this fashion week. But Coach’s new executive creative director, who is set to unveil his first collection for the American leather goods house on Thursday, seems anything but nervous.

During an exclusive preview at Coach’s West 34th Street headquarters in New York, Vevers exuded calm, articulating his vision for a new Coach with confidence. The latter may be the result of his experience at Loewe, Louis Vuitton, Bottega Veneta and Mulberry; $5.08 billion Coach’s extensive resources could have also contributed to Vevers keeping a certain cool.

“I never even thought about it as changing,” he said of his first impressions after his start in October, “but more as coming in, starting the research, thinking about what it should be, not so much what it was. That’s the opportunity you have when you come in fresh.”

In four months, the designer pulled together the new direction for the brand, which he hopes the fall women’s collection will crystallize. It features a full apparel lineup — outerwear being a focus — and a new, younger vibe for Coach’s accessories assortment.

Much of the concept was already taking form during the process of interviewing for the job via several mood boards Vevers presented. “One was product, one was the brand and one was taking brand and turning it upside down,” he recalled.

If there was an added pressure to turn around Embedded link Coach’s less-than-stellar recent financial results, particularly in the North American market, Vevers doesn’t show it. His version of Coach, he said, demonstrates ease and an urban feel. There are references to the brand’s history — Bonnie Cashin the most obvious one for the ready-to-wear — but Vevers was keen not to be too referential when it came to the company’s archives.

“It showed me that as great as an archive is, you need to glance at it and then move away,” he noted. “When I started to receive these things that were playing off the archives, they just didn’t look contemporary enough. That helped me realize very quickly what I wanted to start playing with, which was taking the references of the brand as I had seen it…and New York, its energy and youthful, urban quality.”

Vevers’ designs are for “a new tribe: who the Coach girl could be? Whenever I go downtown or to Brooklyn, I always see girls carrying Coach bags, which just happen to be the vintage ones. So to me, it’s about how to engage with that next generation.

“Coach was started here in 1941 in a little studio,” he added. “This city and this ease to me just says ‘cool.’ I know that’s a vague word, but to me it means urban, ease, effortless, not trying too hard but taking risks.”

Muses range from Dree Hemingway to more cinematic ones like Shelley Duvall in “The Shining” and Sissy Spacek in “Badlands.” For fall, Vevers also looked to the work of fine arts photographer Joel Sternfeld, which informed the deep winter palette and will play a central role in the fashion week installation.

The rtw will premiere in about 30 Coach stores. Much of it captures a workwear vibe. Some coats are rendered in sheepskin; typically American references include varsity jackets and a knitted sweater with a motif of Apollo One. “It’s the American dream,” he said.

The bags, too, read less standard classics and more fashiony. Vevers considers several pieces as potential signature styles, including the Rhyder, a black pebble leather bag with a burnt orange suede pocket. Gone are hefty logo treatments; in their place, a subtle horse and carriage motif placed on bags.

For shoes, he honed in on boots and sneakers, many with wedge heels and platform soles, and shearling linings. The fashion week presentation will focus on these more directional pieces; a fuller selection was shown internally last month.

The collection is the first step in the brand makeover. “We are in the early stages of a multiyear journey,” said Victor Luis, Coach Inc.’s chief executive officer. “We have, in our stores, recently relaunched footwear in a broader way. We had very good success with the Borough collection, and of course, more recently we also had very good success with our men’s. All of that points to our strategy of evolving Coach from a woman’s handbag and accessories brand to a broader lifestyle one that is still very much anchored in accessories. From the creative direction, this is very much chapter one for Stuart.”

That chapter will inform both advertising and a new store concept, expected to be unveiled this fall. Although Luis declined to disclose details, he said it is being developed with “well-known” retail architect.

“We have an obligation, of course, to our shareholders, and also are very cognizant of the fact that we are on a multiyear journey,” he said. “We have a very clear vision and, as a leadership team, are very focused now on executing this vision.”

Elaborating on the vision, Vevers pointed to his background in European luxury. “I spent my whole time in the ateliers there from Bottega, Vuitton, Loewe, and what appealed to me about Coach was that it’s different, and I wanted to make a real statement about the fact that I don’t want to do the same thing,” he said. “I want Coach to be a genuine authentic alternative…almost imagining a girl starting in New York and going on a trip around the world, and picking these things up along the way and ending up back in New York.”