The 26-year-old fashion newbie was invited to sell his next collection at the Dover Street Market Paris showroom on Place Vendôme.

It is not lost on Victor Weinsanto how lucky he is, at age 26, to have had Jean Paul Gaultier attend his inaugural fashion presentation last March — more of a trial balloon, really — and for Adrian Joffe to subsequently invite him, based on the energy of that happening, to sell his spring 2021 collection at the Dover Street Market Paris showroom on Place Vendôme.

He certainly exhibits the zest for free expression of Gaultier, his last employer, and the daring-yet-exacting approach of the Comme des Garçons universe, of which Dover Street is part.

His small studio in the lively Belleville district of Paris, adjacent to his apartment, is a colorful, orderly den of groovy things, denim hats and graffiti handbags strewn among the Nina Hagen albums, the Rihanna magazine covers, a sewing machine and the collection he will parade tonight at a Left Bank nightclub.

The fabrics alone — jersey with the texture of an oil-slick, kaleidoscopic marble-like prints, bleached denim and crystals — skew toward the flashier end of the spectrum. Shapes tend to be clingy — catsuits, high-waisted biker shorts and sculptural bustier dresses — though he cuts all his pants with stretch fabrics, and also likes oversize, scrunched looks, too.

“I just want something fun. I love second-degree, and I love humor,” said Weinsanto, who is known for dyeing his brush-cut hair in a new neon shade every few weeks. (He was mulling a leopard print the day of the interview.)

He has described his aesthetic as “between retro-futuristic and cabaret.” 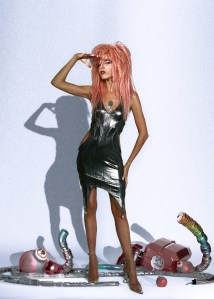 The designer worked with Gaultier on the designer’s 2018 “Fashion Freak Show” revue, and his background is in dance. He said when he designs, he imagines the girl wearing the clothes and how she might move in them, so it was easy for him to also create a short film of models in motion.

But he’s also thinking about her pocketbook. He decided to go with a trusted factory in Tunisia he worked with earlier in his young career, so retail prices will range from about 90 euros for a bra-like top up to about 700 euros for a tailored coat. He’ll also do a few “couture pieces” — including a short dress with more seams than you could count — that’ll top out at about 4,500 euros.

“I’m someone really optimistic, but also realistic,” he said. “And I’d really like to keep bags under 600 euros.”

The latter, manufactured in France in real or pineapple-fiber leather, cleverly pivot from shoulder to waist with a few clicks of hardware and a removable strap.

“Call Me Nina” is the title of his spring effort, and it’s an ode to the German singer, known for her raw, theatrical vocals amid the punk and New Wave movements in the Eighties.

Strasbourg-born Weinsanto, who trained in classical ballet as a youngster but ultimately found it too constricting creatively, relates to Hagen, who decided to apply her opera-trained vocal chords to more cutting-edge music. His father was a fan of Hagen’s, and he grew up loving her music and lapping up her outré style, hinged on dramatic eye makeup and towering hair in multiple shades.

Gaultier and Thierry Mugler rank as his biggest fashion heroes, prizing their sculptural designs. Wearing a black Gaultier tank top with overall hardware bifurcating the straps, Weinsanto said his two years at Gaultier were a formative experience: “an old-school fashion house, but like a big family.”

“He’s so inspiring and has 1,000 ideas in 10 seconds,” Weinsanto enthused about the acclaimed couturier. “When I did my last show, I didn’t expect I would create my brand.”

Weinsanto trained at Atelier Chardon Savard Paris and has also worked at Y/Project, Maxime Simoens, Chloé and Kopenhagen Fur. His Weinsanto label is backed by friends and family and has so far sold clothes only to private clients. 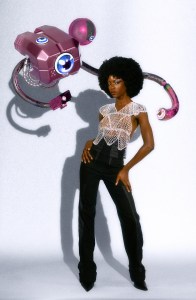