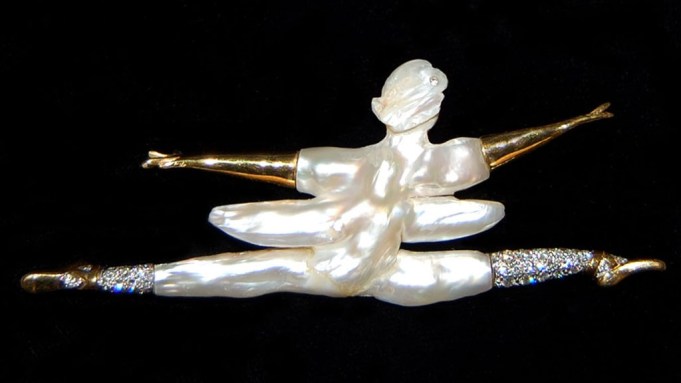 LONDON — There’s one small but very significant object in the Victoria & Albert Museum’s new “Pearls” exhibition that really drives home the historic importance of pearls: It’s the earring worn by King Charles I when he was beheaded for treason in 1649. The exhibition maps the history of pearls from the early Roman Empire up to the present, with notable examples from the intervening centuries on show next to portraits showing the beauty of rare natural and cultured pearls.

The exhibition, cocurated by jewelry historian Beatriz Chadour-Sampson and mineralogist Hubert Bari, begins with a look at the way in which pearls are formed — “It is not from a grain of sand,” said Bari. “It’s a biological incident where a tapeworm parasite from shark or stingray ‘poo’ gets into a mollusk” — and features a 1976 film showing one of the last pearl diving expeditions off the coast of Qatar.

By far the exhibition’s biggest draw is jewelry. Alongside Charles I’s earring is a necklace worn by his granddaughter Mary II, buttons worn by King George III and a choker worn by Queen Charlotte. The influence of Marie Antoinette and Napoleon’s Josephine on style is seen in miniature portraits, while the intricate “Dagmar necklace” given to Princess Alexandra of Denmark when she married the Prince of Wales (the future King Edward VII) in 1863, and a Garrard pendant locket with a black pearl commemorating Prince Albert, are among the other royal examples on show.

Art Nouveau masterpieces dazzle next to intricate Art Deco creations. Of particular note is an organic bodice decoration in the shape of a fish by Georges Fouquet. Stately tiaras by Garrard and Chaumet once worn by heiresses and royalty including Hannah de Rothschild, who became the Countess of Rosebery on her marriage in 1878, gleam close to a pearl-embellished dress by Norman Hartnell worn by Queen Elizabeth II in 1957.

The Bulgari drop earrings worn by Elizabeth Taylor and the strand of Mikimoto cultured pearls given to Marilyn Monroe by Joe DiMaggio on their honeymoon add a touch of Hollywood gloss.

“Pearls are unlike any other gemstone; they are realized to their final state by nature, unlike other gems that have to be cut to reveal their beauty,” said Chadour-Sampson. “For thousands of years, pearls have been associated with wealth, femininity, royalty and status. They were linked to the birth of Aphrodite, and some believed they were tears of the gods. Real or imitation, Coco Chanel wore them, so did Jackie Kennedy; today they’re just as fashionable — Rihanna wears them.”