Victoria Beckham's new denim and eyewear styles will make their debut Wednesday on Net-a-porter.com and at a few select stores. 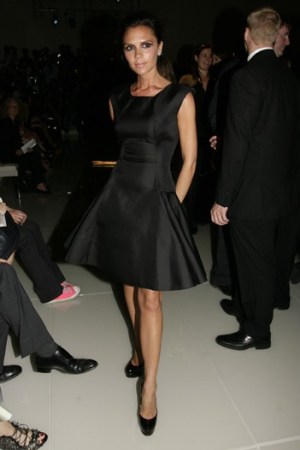 With her burgeoning dress business in its fourth season, the Spice Girl-turned-designer has taken her denim and eyewear collections in-house, and has overhauled and renamed each. The new styles will make their debut Wednesday on Net-a-porter.com and at a few select stores. She also has cooked up two artistically chic short films for the occasion that will be shown exclusively on Net-a-porter for a week, and last month redesigned her Web site, victoriabeckham.com, from top to bottom. Her personal appearances will be ramped up in the months ahead, with one at Bergdorf Goodman during New York Fashion Week being a key cameo in February. Television viewers also will get to see the name behind the brand when she tests the talent as a judge on “American Idol” next month.

Rather than rest easy on her Spice Girls earnings or her husband David’s take-home as one of the world’s highest-paid athletes, Beckham is dead set on earning her keep in the world of fashion. Their joint wealth is said to be north of $205 million, but they still ferry their three sons to and from school regularly. During a telephone interview last week, the former pop star mentioned how she had spent the previous day chaperoning 40 six-year-olds on a field trip to a local airport for a lesson on transportation.

Whether dubbed a perfectionist, overachiever or control freak, the 35-year-old has been in the public eye long enough to not be sidetracked by naysayers. “I plan on still being here in 25 to 30 years’ time,” she said of her London-based business. “It’s about doing things gradually and building the brand in a strategic way. It’s about finding the right time, the right team. With everything that I do, I will only do it after I’ve done all my homework. I really am a perfectionist, and I don’t want to rush anything. It’s not just about putting my name on a product and getting it out there. That’s not what is important to me.

“At the start, it was tough because people had preconceptions, but I worked incredibly hard and kept my head down. After three successful collections — though I’ve got a long, long way to go and a lot of work to do, and I will always feel that I have to prove myself, always — people say, ‘Who is my competition?’ I’m my competition. I want to do better next season than I did this season. And I’m sure the season after that I will want to beat myself again,” she said. “There have been people that have wanted to knock me that haven’t been able to because they haven’t been able to argue with the quality or the sell-throughs.”

Industry sources estimate the Victoria Beckham dress, denim and sunglass business will ring up $7.5 million in sales next year. So hot are her dresses that thieves stole 75 spring styles last week from a delivery van in West London. En route to Heathrow Airport, the driver stopped to make another delivery and returned to find the padlock smashed. Two robbers rushed from the back of the van with the designer loot, according to British reports. The heist was described by one source as “meticulously planned.” Beckham declined comment Monday.

Jim Gold, Bergdorf Goodman president and chief executive officer, said, “Victoria Beckham is one of the great style icons today, and a supremely talented designer. I have great certainty that her new sunglass and denim collections will be extremely well received. As we have seen with her couture dress collection, the moment she wears a product of her own design, it becomes immediately coveted by others.”

Through a new partnership, the British company Cutler and Gross is handling Beckham’s eyewear. In regard to the denim, she is no longer working with Western Glove Works. Spring distribution for the denim and sunglasses will include Bergdorf Goodman, Net-a-porter.com, Harvey Nichols and Maria Luisa, among other stores. Denim retails from $215 to $485 for slim charcoal jeans with square rivets. Eyewear starts at $349 for acetate Wayfarers and tops off at $525 for metal flat-top sunglasses.

“I’m not going to lie — there have been teething problems along the way,” said Beckham, perhaps alluding to the tough run for her dVb denim line, which was launched but subsequently phased out by Saks Fifth Avenue and other stores. “It is always tough when you have partners — you don’t have as much control as you would like. After the success of the dress collection, it just seemed like a natural progression to really take control and take the denim and the sunglasses in-house.

“Everything is now under Victoria Beckham. DVb is no more. Everything is different,” she said, adding the silhouettes, denim and factories have changed.

As for her decision to up the workload, Beckham said: “I can cope with mistakes if they are mistakes that I make myself. So I decided, though it’s more pressure, the time is right.”

Marc Jacobs recently acknowledged her drive. “She is someone who has always wanted to design clothes. She knows the body, she loves it and she’s working her ass off,” he said last month at the WWD CEO Apparel/Retail Summit.

Friendly as they are — Beckham appeared in one of Jacobs’ ads barelegged and upside down in a shopping bag — she didn’t clue him in on her design pursuits. “When I came out with my first collection, I didn’t even tell Marc. Well, I felt a little bit embarrassed. He’s Marc Jacobs. What else can I say? I never really told him, and then we went to dinner and he said congratulations on all the reviews and the quality of my work. I’ve learned so much from him. I am such a sponge whenever I’m around him. He is one of the most intelligent, interesting people that I have ever met.”

Unlike several celebrities who have jetted in — and often out just as quickly — of the apparel business using their names and not talent to build brands, Beckham has been more under wraps in her approach. Her low-key presentations are counter to some of the over-the-top runway shows thrown by other luminaries. Madonna and Jennifer Lopez are a few notables who have furthered her cause by wearing her dresses. Asked if she had any words of wisdom for Lindsay Lohan, who is now pitching in at Ungaro, Beckham said: “Goodness, I don’t think I could give anybody any advice. I’m only in my fourth season. I think there is room for everybody and I always say good luck to everybody. I don’t really pay attention too much to what anybody else is doing except for myself. Obviously, I am aware. I’m not being stupid. Everybody is doing their thing and that’s cool.”

Despite being a favorite paparazzi target, Beckham said she doesn’t get sidetracked by what the weeklies print. (Recent reports chronicled her bunion problems.) “I pay absolutely no attention to the tabloids. For me, it’s always fun to look at the pictures — ‘Do I like my hair there? Don’t I like my hair there?’ but that’s pretty much where it ends.…I take it with a pinch of salt. I’ve been doing this for a long, long time now. Living in America, people are less obsessed with tabloids. I don’t read the weekly magazines that come out. I don’t have any interest in that, to be completely honest. Most of the time it is such a load of drivel that I think it’s a waste of time to read it, that I would rather put my energy into something positive.”

Beckham said she prefers to use her creative energy in other directions. At the request of Net-a-porter.com, she developed a 21st-century virtual store appearance with a walk-on cameo on the cover, audio commentary on the collection and tips about how to wear it within the site’s weekly magazine. The site’s founder, Natalie Massenet, said, “Her style resonates [with our shoppers] on many levels — from the look, which is chic and timeless, to the fit, which, thanks to her exacting eye, focuses on flattering silhouettes.”

While a few fashion friends have offered occasional advice from a business standpoint, Beckham insisted she handles all design decisions. Asked if she ever bounces ideas off her friend Roland Mouret, she said, “I have utmost respect for Roland. I think he is incredibly talented. I love what he does. He’s a great businessman. When I very first started working on the dresses, he gave me advice when it came to putting my team together. He doesn’t have anything to do with the design of anything that I do. But he taught me about how to turn my dreams into reality, if you like. He told me I needed a production manager — he helped with that side of things. I do what I do, and he does what he does, and it’s incredibly separate.”

Like Beckham, Mouret has a joint venture with Simon Fuller’s 19 Entertainment, which also has Fashionair.com in its portfolio, among other things. Aside from creating the Spice Girls, Fuller is also the business manager for Beckham and her husband. “American Idol” is one of the TV programs Fuller has created and produced.

Interestingly, as high powered as Beckham has become, her schoolgirl days of being bullied inadvertently helped shape the businesswoman she now is. “I’ve always been driven. I was mentally and physically bullied when I was at school and that gave me a very thick skin.…The only reason for me bringing that up is I have always been a fighter,” she said. “I have always had to work very, very hard with everything I do. That is just my work ethic. That’s just me. That’s my DNA.”