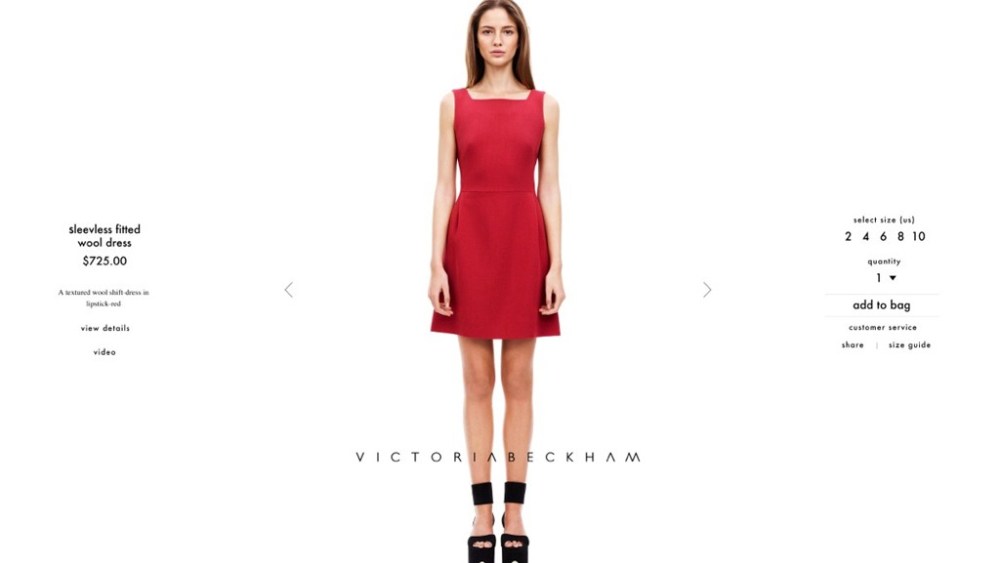 Victoria Beckham is trying her hand at retail.

The designer will today unveil a revamped Web site with e-commerce at victoriabeckham.com — a multicategory destination that will carry her main ready-to-wear collection, contemporary Victoria Victoria Beckham line, accessories, eyewear and denim.

Currently, about 20 percent of the company’s business — entirely wholesale until now — comes from online sales through other retailers’ Web sites, according to Victoria Beckham chief executive officer Zach Duane, who calls e-commerce “the biggest channel of sales by far.”

“That statistic alone makes it an important next step for us. When you think about opening your first physical shop, you come to the point of view that e-commerce allows you to service a global customer. We sell to over 54 countries, and we have a very even distribution across those counties,” Duane said.

Duane declined to reveal e-commerce sales projections for the first year but said he hopes sales on victoriabeckham.com will equal the size of the brand’s online business through other retailer’s sites.

According to Duane, the biggest market for the brand is the U.S., making up just more than 20 percent of the business, followed by Europe (where the U.K. and Germany are key players) and Asia (which includes Hong Kong, Mainland China, Korea and Japan). There are 500 global stockists, with 150 doors in Europe, 70 in Asia and about 40 in the U.S., which due to depth of buy still commands the largest percentage of sales.

He noted that when it comes to analyzing the business across markets, each of the five categories is essentially assessed as a stand-alone business. Since launching Victoria Victoria Beckham, Duane has witnessed a “huge surge” from Japanese customers. For accessories, the Middle East is an important market, and with eyewear — because it’s handmade and a luxury product — sales are skewed toward Asia and Europe, where there’s less price sensitivity. Rtw performs well across the board and is not as market-focused as the other divisions, according to Duane.

Because the U.S. and Europe are the top-performing markets, an effort was made to simultaneously launch the e-commerce site in both regions.

“We absolutely want to expand beyond this, but there are some markets that are more challenging than others with respect to e-commerce, and China is one of them. It’s one of the most difficult markets to service from an e-commerce perspective, so we want to make sure we do it in the right way and are relevant to that market,” Duane said. He added that although Asian business is growing rapidly, it won’t eclipse American sales in the near future.

Upon entering the site, created by King & Partners, the user is prompted with a page — a low-fi and high end-mix of raw black-and-white images paired with sleek typography — that gives them the choice to “Shop” or “Look.” The latter is the brand side of the site and houses all social media feeds, as well as hundreds of images and GIFs. A tool will pull in social content, allowing the brand to select what it wants to feature.

Rattling off adjectives like modern, clean and easy in describing the Web site, Beckham said she was “very hands on” in the entire process. In addition to being involved with the buys for each category (she “personally decided what I wanted to buy and be available to consumers”), the site will sell an exclusive selection of reissued dresses from previous seasons in various fabrications and colors that Beckham still wears herself. The Victoria Beckham Icon collection currently is comprised of five dresses — including a black basket-weave cotton corset dress from spring 2009 and a navy and teal double crepe cap sleeve shift from spring 2012 — with a new selection becoming available every few months.

Beckham explained that part of creating an rtw offering available only on the site was to produce each style in limited quantities.

“They don’t seem to date, and the customer feels good in them. Once it’s sold out, that’s it. There will be no more. I limit my production,” she said. “It’s not about making and selling as many dresses as I can. I’ve never done that. I want to limit it so the customer feels special. It won’t go to any other retailer. It’s really exclusively for me.”

In addition to building a digital platform where the consumer could see the brand through the designer’s eyes, customer service features like same-day delivery are available in New York City and London (currently the site ships only to the U.S. and Europe). Sales associates are reachable by phone if shoppers have a question or want to locate an item that is either sold out or not carried on the site (even if the desired product is sold through another retailer). Beckham noted that she’s even shot some of the images featured in the visually driven “Look” section of the site.

“There’s a cool, edgy rawness to it — and that’s very much how I wanted it to look. With regards to the imagery, I haven’t done anything too complicated. I’ve kept it real. It’s very relatable. I didn’t want the images to be super glossy and retouched — I find that quite an old-fashioned approach. It’s very honest. That’s why people respond to the brand in the way that they do,” Beckham said.

Returning to the aspect of making her consumer feel special, Beckham explained that this isn’t limited to the process of ordering or wearing her dresses. She helped design the packaging — a high and low mix much like the site’s aesthetic — fashioned from white gloss paper on the bottom and recycled craft paper on the top.

Coming soon is the integration of a mobile site, as well as a sales service where images and products are shared with VIP customers to enable personal shopping.