The next five were Calvin Klein, Michael Kors, Alexander Wang, Carolina Herrera and Christian Siriano, in order, according to ListenFirst, a leading social analytics firm. ListenFirst’s social engagement score is based on the volume of social post engagements, fan growth and brand mentions across Facebook, Twitter, Instagram, Tumblr, YouTube and Google from Feb. 8 to Feb. 14. 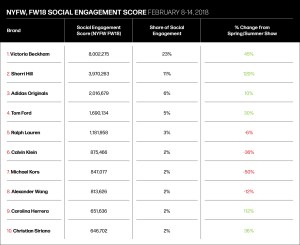 Overall, “NYFW fall/winter 2018” was mentioned 478,000 times during that time frame, down 31 percent from the spring shows in September. Although NYFW was on the whole less buzzed-about this season, participating brands were able to keep their own engagement high, according to Miranda McWeeney, fashion and beauty industry lead at ListenFirst.

“Brands that followed the celebrity strategy, such as Victoria Beckham, won fashion week from a social engagement perspective, but the actions were unrelated to the collections. On the other hand, brands that struggled to keep pace this season had a high focus on the collections themselves — engagement with posts of this kind have a potentially higher value for the brand, but generate far less engagement,” said McWeeney.

Among the notable highlights, Beckham grabbed the top spot (over 8 million engagements) by mixing posts about her label and personal life. A photo of Beckham with her daughter at NYFW was the most engaging Instagram photo of the week with 955,000 responses, and the top tweet on Twitter with 7,400 responses.

ListenFirst said Sherri Hill’s success (nearly 4 million engagements and a 120 percent increase over last September’s show) was partly attributed to Instagram and Facebook posts about former Miss Universe Pia Wurtzbach on the runway, which drove the most engagement for the label. One of its Facebook posts received 405,000 responses.

According to ListenFirst, the reveal of the NYFW collaboration between Adidas Originals and Daniëlle Cathari, the 23-year-old Dutch designer, on social proved to be a winner, gaining over 2 million engagements over the course of the week. The combination of the designer and diverse models representing the line led to driving 200,000 new fans for the brand.