The designer has built a dream space on Dover Street in Mayfair. 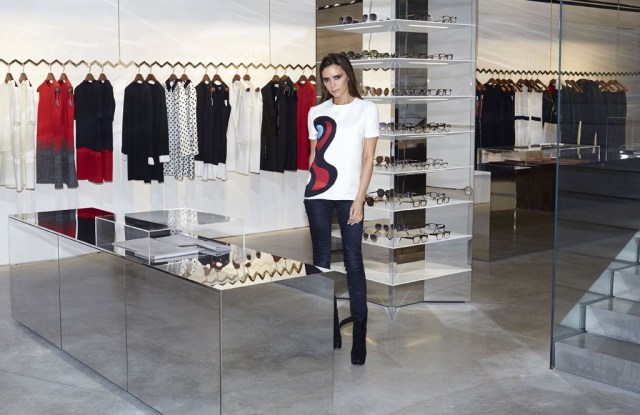 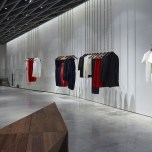 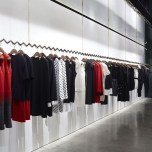 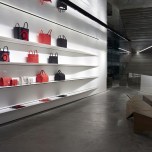 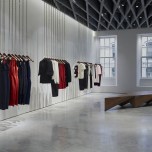 LONDON — Victoria Beckham has built a dream space on Dover Street in London, her first store and “second home” in Mayfair, where she can express her vision on the shop floor. The 6,040-square-foot space spans three floors, and has more in common with a contemporary art gallery than a typical London luxury flagship.

Designed by the architect Farshid Moussavi, a Harvard professor whose past works include the Museum of Contemporary Art in Cleveland, Ohio, the first Victoria Beckham flagship was always meant to be a democratic space. “I wanted a space that was conceptual — but also warm and welcoming,” said Beckham, who was filled with excitement during a recent tour of the store, which opens Thursday.

This story first appeared in the September 24, 2014 issue of WWD. Subscribe Today.

“There are a lot of people — the general public — who’ve continued on this journey with me, and I want everybody to feel welcome, whether they’re going to buy something, or whether they just want to come and check out the architecture. And I really wanted people to get a sense of me the minute they walked through the door,” said Beckham.

Everything — the ready-to-wear and accessories offer, merchandising, size of the dressing rooms, “blonde gold” zigzag rails and hanger chains — bears her fingerprint. There is also a conspicuous lack of cash registers; instead all transactions will be via iPad, eliminating the need for “ugly” tills, according to the designer.

“For the first time, it’s my designs, my vision. This is how I feel the clothes should be showcased, how I like them to be seen. That’s been very exciting for me — to be able to buy what I believe the customer wants,” said Beckham, adding it was important that the space be flexible and able to accommodate a “constant flow” of new product. “We can play with how we merchandise things, and I think that’s a very modern way of shopping. So hopefully, every time somebody comes to the store it’s going to be a slightly different experience,” she said.

As for her buy, Beckham said she’s invested “quite heavily” in show looks. “I think it’s important that women can actually buy what they see on the catwalk and what they’re seeing in magazines,” said the designer, who is also stocking exclusive sunglass styles, small leather goods, key rings and a skate chain inspired by the one her husband David Beckham wears.

Mr. Beckham himself — all smiles — made an unscheduled appearance during the walk-through, to the surprise of his wife. “It’s great, isn’t it, David?” she asked him. “Have you seen how these move?” she said as she twisted the walnut hangers that are attached to golden chains suspended from tracks on the ceiling.

She also recounted how the couple’s boys reacted when they first saw the space. “It was so cool when the kids saw it yesterday, David. They literally ran up the stairs, and Brooklyn ran to me and said, ‘This is the coolest shop ever!’ Cruz went like, ‘Wow, mummy has a proper job.’”

A gigantic polished concrete staircase visible throughout the store connects the three levels. Floors are also done in polished concrete, and are offset by stainless steel counters, the shiny zigzag clothing rails and the golden chain hangers. Ceilings are clad with stainless steel mirrors, with the exception of the top floor, where that surface has been done as a diagonal concrete grid.

A big, sliding concrete door marks the entrance, and the street-facing window has no display. Instead, passersby will be able to look straight into the ground floor, which houses accessories on retractable shelves, and the VVB and Denim collections.

Midway up the staircase, on the way to the top floor, is a blank wall where Beckham plans to project runway images or her own backstage footage of models. Upstairs houses rtw and a lineup of supersize dressing rooms, their doors clad in bottle-green glass. “When I go shopping, I’ve always got at least one child. There’s lots of room to hang clothes — and flattering lighting. I wanted the store to look beautiful, but I also wanted it to work as well,” she said.

The lower ground level — visible from the upper floors — is arguably the space that holds the most potential for Beckham. “I think I will do presentations there, whether it’s trunk shows, or it will be a case of me just turning up and having appointments with customers that want to see me, to place orders with me specifically. It’s important that I really have a presence because I’m so hands-on with every element of my business and people can see that, people can feel that, and so I will be here a lot. This does feel like my second home.”

The lower ground-floor space is so big that part of it will be used as a stockroom, both for the store and for the brand’s e-commerce site.

Beckham said the Mayfair location, with neighbors including Dover Street Market, John Rocha, Chucs Bar & Grill and a lineup of galleries and restaurants, is ideal. “I looked at lots of different locations, but I do believe in fate, and this just happened to be the perfect space in the most perfect street. I did look at other streets, but this just felt right. I feel very honored to actually be in a street amongst such incredible stores. The energy is incredible.”

Zach Duane, the brand’s chief executive officer, said it was critical the store be a reflection of Beckham’s brand. “The world is changed, people are shopping online a lot more, so what they are looking for in a store environment is an experience, a really strong sense of what the designer is about, their point of view, their world,” he said.

While digital is great — and important — Duane said the other side of the coin is “personal interaction. The customer starts to expect a different experience, so brands will be forced to be a bit more original in what they’re doing in their physical spaces.”

He also said the choice of street was strategic. While Dover Street is in the heart of Mayfair, it is better known for restaurants and art galleries than for luxury retail — although that’s rapidly changing. “There’s no way we could have opened a store like this on Bond Street. For the company we are today, and the size we are, it would have been impossible. So we decided that we’d go slightly off the track,” he said.

Duane declined to give a first-year sales projection. Real estate sources here said the annual rent on the building is about 550,000 pounds, or $900,000 at current exchange.

There is no question the London store is a milestone.

Duane said the U.K. is the brand’s “single best-performing country,” followed by North America, Europe, Asia and the Middle East. The Dover Street unit, he added, will be a template for future standalone stores and shops-in-shop. “It allows us to start thinking about how we take the idea, the finishes and designs that have gone into this store and reflect that in other stores around the world,” he said.