With the spring 2012 launch of Victoria by Victoria Beckham, the designer expects to capture a whole new fan base. 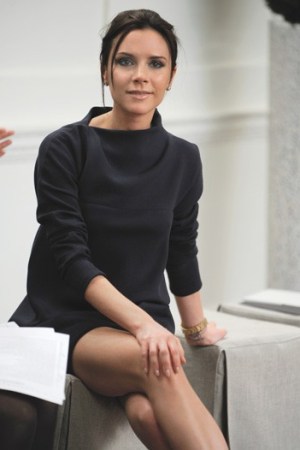 As anyone with a passing interest in the tabloid side of celebrity knows, Victoria Beckham is about to have a baby. Though prior to gender confirmation she was loath to admit it, this mother of three gorgeous boys was, understandably, rooting for a girl this time. Now, the baby’s sex long confirmed, Beckham floats the notion that her daughter has already influenced her work, hormonally speaking.

The designer muses about a possible impact of the pregnancy on Victoria by Victoria Beckham, her new don’t-call-it-a-secondary-dress-collection due for fashion delivery for spring 2012. The two projects have been in the works for about the same time, give or take. Beckham recalls that early on when she informed her staff of her baby news after first being told she was having a boy, “One of my team said, ‘It would be funny if you found out you were having a girl.’ Because this is the most girly collection I’ve ever created.”

The girliest, youngest and, set to retail primarily in the $550 and $900 range, most accessible. Beckham characterizes the new dress line as representing her “other side,” the alter ego to her more glam self as manifested in the Victoria Beckham line, now in its sixth season. Her de facto chief executive officer, the charmingly untitled Zach Duane, refers to the launch in more concrete terms. “We had to do something,” he says, “or we’d be a niche brand forever.”

Inspired by the cartoon character Emily the Strange, an edgy adolescent often followed by four cats who dresses on that line where cute meets chic (and who has her very own brand), this collection centers on a loosened silhouette. “These are the kind of dresses I’ve been searching for,” notes Beckham, who admits to being her own archetypal customer. If she won’t wear it, it doesn’t make the line. “The perfect little summer dress, something that was fun, something that was girly, something that was easy to wear, something that would take you from day through the night.”

The girlishness and whimsy come through in the clean, vaguely Sixties shapes; vibrant colors and design details, such as scalloped edges and pleating; they should show up as well in a series of not-ready-to-shoot conversational prints. These include clouds, moons and, in the spirit of Emily, two of the kitty variety, one “Victoria Cat” and the other, “Cutey Cat.”

“Where I am currently, I like a more modern attitude,” Beckham explains. (In her main line, as well, she has in recent seasons introduced alternatives to her signature hyper-curvy shapes.) “Also, it means that I’m opening these designs to women and girls of all different shapes and sizes, people who maybe want something less tight and clingy and structured. It also makes it more comfortable for during the day. You can wear them with a pair of flats or a pair of heels and they look great.”

Produced in Portugal, the line will feature some hand-finishing as well as Indian embroideries. Though a few pieces may retail for as much as $1,300, Beckham stresses the importance of delivering value at every price point. “I take it into account when I’m designing the other line as well. Simply having a pocket — there are repercussions. Even with a handbag that costs thousands and thousands and thousands of pounds, I’m not going crazy. I’m still aware of how much the hardware costs exactly, exactly what the skin costs, how much the lining costs. At no point do I ever say it’s one of those one-off showpieces.”

The launch of Victoria is obviously a major step in expanding her brand’s reach. When it comes to existing retailers, Beckham would like to see the new line merchandised in concert with her original collection in existing stores; Duane, meanwhile, acknowledges that that plan might not fly. “They work really well together and we’d love to say, ‘Put them together,’” he offers. “But no, we’re not going to insist on it.”

Beckham does look forward to “making quite a fuss when this launches at retail,” implying that she may do a series of major appearances. She also may plan an event in conjunction with London Fashion Week.

First-season sales are expected to generate less than 10 percent of overall turnover with, Duane says, “the potential to become more commercial than the main line because of the way we’ve chosen particular structures to make the dresses and we’re working with slightly different factories.”

With refreshing candor that runs counter to the typical we’re-private-so-no-numbers approach, Duane goes public with figures. Last year he projected a $7 million turnover for 2010, underestimating by $1 million. “For this year, giving you a conservative estimate, I’d say we will exceed $12 million in sales,” he says. “But it could be far more than that. With Victoria, we seem to be catching up with demand the whole time. So I put conservative numbers into our business plan without a doubt that, season-to-season, we smash those about by about 30 or 40 percent.”

The Victoria collection is the latest expansion of the growing joint venture business launched in 2005 by Beckham, her husband, David, and Simon Fuller, the now-legendary talent manager and creator of the “Pop Idol” and “American Idol” franchises; he’s the man who put the Spice in Beckham’s life back when. “Simon is the best business partner you could ever have,” she says. “He gives me incredibly loose reins to do what I want to do. He likes to rewrite the rules, as do I, as opposed to follow the rules.”

The way the still-young business has developed offers ample evidence of their fluid approach. Under the original concept, the dVb label would serve as an umbrella for products launched by both Victoria and David. Heralded in advance of the couple’s arrival in the U.S., in a provocative Steven Klein photo essay in W Magazine in February 2007, the brand launched with a Coty fragrance and jeans produced by Rock & Republic. But that model was soon reevaluated and ultimately tossed.

DVb, Duane explains, was conceived as an umbrella that would cover both Beckhams “as a kind of joint brand, a kind of power couple.” Yet once they started developing Victoria’s side of the business, it became clear that her name and vision carried power on their own. “Very quickly we realized that she had a voice, there was demand, and more importantly, that she had her own brand that was very distinct from her life as David’s wife or them as a couple. We realized that the dVb brand name didn’t really work because they’ve taken very different paths, and what she stands for in the market is very different from what he stands for. We decided with the launch of the dress line that it would just be called Victoria Beckham and over a period of a few seasons, rebranded everything. DVb, as far as she’s concerned, does not exist anymore.”

Beckham welcomed the change and finds the responsibility gratifying. “I found myself in the position where I could finish with dVb and bring it all in house, where I wasn’t going to have to compromise with anybody,” she says, explaining an essentially simple business structure. “Everything David’s doing and everything that I’m doing, we’re doing together. It’s myself, it’s David and it’s Simon. Whether it’s the Victoria Beckham line or it’s David’s new underwear line, it’s the three of us. I’m very lucky to not have anybody else to answer to.”

With the exception of fragrance, done with Coty, all Victoria Beckham products are produced in-house. That’s now two dress collections, denim, bags and even eyewear, produced in the factory of the British firm Cutler & Gross. Though a difficult category to take on independently, both in terms of production and building retail relationships, this was done, Duane notes, to ensure “a unique point of difference. We didn’t want to do the tradition of working with one of the four major eyewear license companies who put out some lovely product, but there aren’t huge points of difference.

Victoria is completely notorious [for loving sunglasses] and it’s an opportunity to showcase a slightly more independent approach to product design.” He cites as an example the embedding of dress fabrics from the fall collection in acetate frames. As for David Beckham products, they are being similarly rebranded, although licensees such as Adidas remain.

According to Duane, the separation just made sense. “It’s recognizing the reality that, yes, they’re known as a couple,” he says. “But they have very, very individual personalities that get reflected in the business they do, so they are now going to be seen as two separate brands.”

Which is not to say that Mr. and Mrs. will never again join forces in the interests of marketing, when, Duane notes, “the power of both of them is something we want to take advantage of. They are a couple. And the impact of the two of them walking into a room or an event is phenomenal.”

As for the growth of the distaff business, the Victoria dress line is merely the next step. Other product categories, as well as retail, both e-commerce and brick-and-mortar, are on the horizon with no firm timetable, though Duane says the latter should get under way within the next 12 to 24 months, with New York a likely setting.

As for Beckham, she will not be hurried before her own quite exacting comfort level, and will proceed only when she has the time and knowledge to do so with utter confidence. “We are considering new [projects],” she says. “But I also have a husband and three children and another one on the way, and I would always make them my priority. I never want to start something until I have the time set aside to do it impeccably.”

Does she ever wonder why she’s taken it all on?

“Oh my goodness, yes!” she says. “As any working mum out there knows, it really is like juggling glass balls when you’ve got the kids and a husband to look after, and you’re passionate about your career. It’s a lot. But I wouldn’t have it any other way. I’m blessed.”

Similarly, she has adhered to sartorial discretion during her pregnancy. Asked about a months-old report that she had planned to do a nude shoot for Vogue à la Demi Moore in Vanity Fair, she gave an immediate and firm no way. “Nope. Sadly not,” before elaborating. “I’m not really one of these people that likes to go out and pose and flaunt being pregnant. Not like there’s anything wrong in that. I’m so proud to be pregnant and I feel so blessed and so happy, I really do. But I’m just not that kind of person. So, no, I won’t be taking my clothes off. I don’t think anyone needs to see that, other than my husband. Absolutely not.”