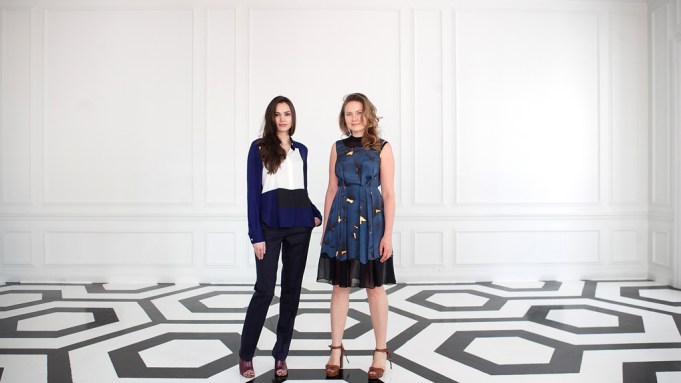 Inside the Academy Mansion at 2 East 63rd Street in Manhattan, Victoria Golembiovskaya and Anastasiya Siro are wandering through the ornate Twenties-built structure and gamely posing for pictures. Dressed in Céline (Siro) and Phillip Lim and Dries Van Noten (Golembiovskaya), one might assume the Eastern European beauties were styled for a fashion shoot. But their expressions — normally serious anyway thanks to their respective Russian and Ukrainian roots — are all business, determined to get the shot quickly so that they can return later that afternoon to set up their biggest exhibit in New York to date. Together the duo runs House of the Nobleman, an art advisory, curatorial practice and private dealership that Golembiovskaya founded in London in 2010. The Academy Mansion exhibit, “Delirious Picasso,” featuring paintings by British artist Wolfe von Lenkiewicz alongside a selection of works by Picasso opening May 12, marks the launch of the firm’s New York chapter. Theirs is a cross-continental partnership, with Siro based in New York while studying for her masters in art history at Columbia University, and Golembiovskaya stationed in Europe. “It’s a long-distance relationship,” Siro says over lunch at the Loews Regency. They met in Miami at Art Basel in 2011, and it was then that Golembiovskaya decided she needed someone on the ground in New York. “I was looking for a partner,” Golembiovskaya says. “And then we fell in love.”

House of the Nobleman started with a show at Boswall House in London, part of Cornwall Terrace, which was built in the 1820s (and later renovated and sold for 15 million pounds). Banksy, Alexander Calder, Paul Cézanne, Damien Hirst, Édouard Manet and Andy Warhol were some of the artists Golembiovskaya featured in that exhibit, which was inspired by an imaginary art dealer who could have lived there. “There were noble people living there for 200 years before they started to do the redevelopment of that terrace,” says Golembiovskaya, explaining the etymology of her company’s title. “The name got stuck to us and we started to think about what it could mean. It’s about rediscovering the values of how artists have been supported by noble people through history.” They’ve maintained a focus on architecture during their biannual exhibits timed in opposition to the Frieze art fairs in London and New York, also working with the Collection restaurant and NEO Bankside penthouses in London. “We are very interested in working with unusual spaces,” Golembiovskaya says. “To show art in a domestic setting is a little bit of a different attitude. For me, art fairs are really distracting — it’s just wall space. We want to create a space for our clients and guests and friends where they feel nurtured by art and they can appreciate it.”

Art appreciation is what brought the two women together in the first place. Golembiovskaya started her career in the film business in Russia, producing movies and live performances. “At some point I felt very claustrophobic in Russia due to the political situation,” she says. “Culture is not a priority for rich people and government.” Siro, meanwhile, was involved in the theater before moving stateside to study — she hopes to graduate this year, although only if House of the Nobleman doesn’t take up too much of her time.

Year-round, they work with a cast of artists and collectors (though they won’t name names), but it’s their exhibits that require much of their energy. “With the buildings [we want to work with] you can’t plan really far in advance. It’s a very short lead time,” Golembiovskaya says. “With three or four months notice we can create a very complex project. That’s challenging, but at the same time it’s stimulating.”