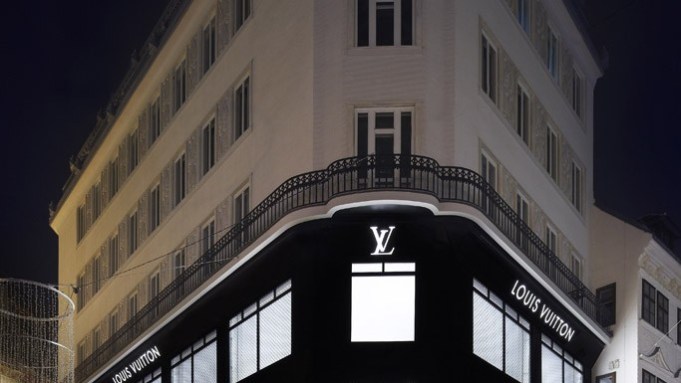 VIENNA — Louis Vuitton is to open one of its largest stores in Europe here today, helping to transform the Austrian capital’s historic center into an important new luxury destination.

The French leather goods company and Emporio Armani are among the first arrivals in an ambitious retail project worth 500 million euros, or $640 million at current exchange, stretching over several blocks from Tuchlauben to Am Hof, two of Vienna’s most venerable addresses.

Once construction is complete in this new “golden quarter” in 2014, the streets will be transformed into a pedestrian zone chockablock with boutiques. A dozen high-end fashion brands have already signed on to join the burgeoning strip, which offers 123,785 square feet of retail space.

Prada, Miu Miu, Saint Laurent Paris, Brioni, Etro, Brunello Cucinelli, Seven For All Mankind, Church’s and Roberto Cavalli are among those expected to open stores in 2014. Also coming in 2014 is a five-star Park Hyatt hotel that will have 143 rooms.

“Vienna is more and more becoming the ‘Paris of the East,’ and once the golden quarter is finished, [the city] will be on a par with shopping meccas like Paris, London and Milan,” said Geoffroy van Raemdonck, South Europe president of Louis Vuitton, explaining the company’s decision to relocate its boutique from Kohlmarkt to the new Tuchlauben complex. “We have seen a double-digit growth in the past years and are expecting further dynamic growth in the coming years.”

“Vienna has a lot of potential, thanks to a new, rich influx of international tourists as well as wealthy foreigners who have chosen to settle here because of its ideal location and the stability and high quality of life the city offers,” said Holger Schmidt, chief executive officer of Giorgio Armani for the German-speaking region.

Louis Vuitton celebrated the opening with a dinner at Palais Schwarzenberg on Saturday, co-hosted by contemporary art collector Francesca von Habsburg. The night sky was brightly lit by the open flame of a hot air balloon flown in from Paris for the occasion — the same red-and-white striped airship that took off from the Cour Carrée at the Louvre, carrying model Arizona Muse, in the company’s latest commercial, “L’Invitation au Voyage.”

Earlier this month, Roberta Armani hosted a cocktail party here to mark the opening of the new Emporio unit, which is next door to Vuitton.

Tuchlauben is the historical center of Vienna’s tailors and cloth merchants, dating back to the 13th century. Vuitton’s new flagship sits behind a listed facade built in 1910 by local architects Spielmann and Teller.

Boasting dramatic black cladding, the building mixes well with Vuitton’s golden decor. Inside, set against the backdrop of a metallic curtain made from 7,000 recycled industrial metal pieces, a golden balustrade reminiscent of Viennese Art Deco jewelry leads to the upper two floors, where vintage furniture from the Wiener Werkstätte pays further tribute to the region.

Once completed in March, the store will be one of the largest flagships in Europe, measuring close to 13,000 square feet, with a separate entrance for a watch and jewelry unit. Still under construction is the second floor, which will eventually house women’s ready-to-wear, for now available through Vuitton’s smaller store on Kohlmarkt.

Co-designed by American architect Peter Marino, the store features a room dedicated to the art of travel. Photos by Rashid Rana, Steve McCurry and Jean Larivière adorn its caramel-colored walls.

The Emporio Armani store has a subdued color palette with a casual atmosphere. Schmidt said he’s confident the brand “will be met with enthusiasm by Vienna’s younger citizens,” while the existing Giorgio Armani boutique on Kohlmarkt, which is run through a local franchise, will continue to cater to a more established clientele.

How quickly can Austria’s biggest city become as famous for shopping as its rich offer of music, theater and opera? Friedrich Jonak, a local luxury retailer who introduced some of the first luxury brands, such as Chanel, to the local market and still operates the Versace, Hermès, Giorgio Armani and Dolce & Gabbana boutiques through a franchise, said Vienna will need time to match other European cities.

Not that the region is a stranger to luxury. This former home of the Habsburg dynasty and capital city of an illustrious empire has seen wealth flow in abundance and the region prosper.

“But two wars left the city damaged, and with the Iron Curtain around the corner, development was slow,” said Jonak, whose family business dates back to 1920. “It was not until the fall of the Iron Curtain and the sudden influx of affluent Russian luxury travelers, craving what they had been denied for decades, that the local market received a real boost. And so, whereas Paris or London had 60 years to build their upscale retail businesses, Vienna only had 20 — but it’s getting there.”

René Benko, ceo of Signa Holding, the Innsbruck-based real estate company behind the golden quarter development, pointed out that premium space in the city center has been scarce, which might also explain why luxury here is so late to the retail table.

“Now that we are offering these additional units, we see high-end brands flock to Vienna. All with the exception of Vuitton and Prada, which are simply relocating to the golden quarter because they want to expand, are settling here for the first time,” Benko said. “[They know] Vienna has not tapped its full luxury potential yet, and figures show that demand from Asian, Eastern European and Arab markets is unbroken. We want to meet these demands.”

The city, which has a population of about 1.7 million, is indeed riding high. According to the Vienna Tourist Board, the capital has been breaking visitor records each year for the past decade, with the exception of 2009.

“Tourism is booming,” said Norbert Kettner, the board’s director. Between January and October, overnight stays were up 8 percent from the previous year, reaching 10.3 million, while the city’s hotel industry posted a 10.3 percent jump in turnover to 396.2 million euros, or $507.1 million at average exchange, in the same period. The month of September was the most successful month ever, with a record rise of 33.5 percent in turnover to 69.6 million euros, or $89.1 million.

“One of Vienna’s great advantages lies in its rich cultural heritage, which mixes well with modernity. It’s not just pretty history — the city is contemporary and functional at the same time,” Kettner said. “Luxury is highly concentrated in the center. You can move here freely, eat well, be safe; it’s clean and the cultural experience is at its best. [In such an environment], people expect a Louis Vuitton flagship.”

Russians are the top nationality visiting Austria. Between January and September, they generated a turnover of 77 million euros, or $98.9 million at average exchange, a 26 percent jump over last year, though Chinese travelers are close on their heels. They now spend 62 million euros, or $79.7 million, which is a gain of 76 percent from the same period in 2011. “We estimate that the Chinese will have surpassed the Russians before the year is over, which coincides with the overall international trend,” said Gerd Gfrerer, country manager for Global Blue Austria.

Strong increases in spending have also been reported for nationals from Thailand, up 59 percent; Saudi Arabia, up 50 percent; Korea, gaining 34 percent, and Japan, rising 30 percent. Americans, for the first time, no longer rank among the top 10 spenders in Vienna. With an increase of 12.4 percent, they fell to 11th in the ranking.