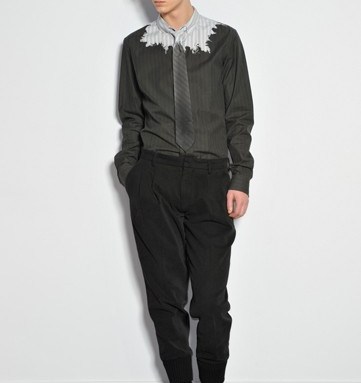 Today in Paris, Viktor Horsting and Rolf Snoeren of Viktor & Rolf will bring their conceptual and humorous men’s wear out of the showroom and onto a runway for the first time. The theme of the season is borrowed from the Rolling Stones’ “Paint It Black.”

“Colors and prints are darkened, sometimes literally with black paint,” said Snoeren. “And there’s a lot of details to make tailoring more twisted and get away from the classical.”

The show will be in a small room with a black-splotted carpet and a British singer from Berlin, Ben Hamilton, performing an acoustic version of the Stones’ song.

“We like the idea of live music for the intimacy of the room, to make it feel natural and up close, like you’re in someone’s living room,” said Horsting.

The Dutch designers thought it was prudent to do their first men’s show on a small scale and grow from there. Growth has been a strategic priority since the pair sold a majority stake in their company to Staff International, the manufacturing arm of Renzo Rosso’s Only The Brave. Viktor & Rolf will open a Paris flagship this fall and probably a New York store next year.

“Before, we did everything ourselves. Now we have a chief executive and a much bigger team. It’s very nice that when you do a sketch and send it, you get something back that is beautiful and high quality. The bar has been raised. And we have much more time now to be creative, do personal appearances, to think and to grow, because you need mind space for that. We’re traveling much more, which is nice,” said Horsting.

“So fashion is fun for us again,” added Snoeren.

The pair feels strongly they waited until the right moment to find a partner.

“We are control freaks, but at a certain moment you see that it’s limiting to try to control everything around you. In retrospect, our success is because for the first five years we had none. No attention, no sales. We hated it at the time, but it’s so good to find your DNA and differentiate yourself. Otherwise things can grow so fast, before you’re discovered who you are,” said Snoeren.

Now that the brand is opening stores, the designers are deliberately making the men’s and women’s lines more cohesive.

“There will always be an element of irony, but maybe less than in the past,” said Horsting. “We want to balance it with the fact that we’re dressing a grown-up man. He’s us, really. Ultimately we’re always dressing us and our desire to be both formal and sportive, never too much one way.”