For their newest fragrance, the design duo went for a spicy masculine counterpart to their women’s floral fragrance hit Flowerbomb. 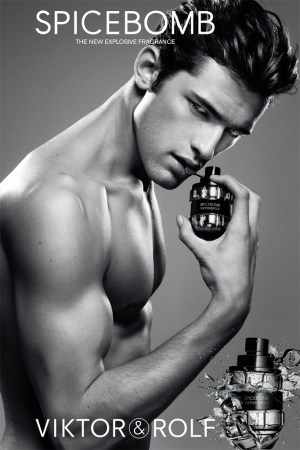 PARIS — Viktor Horsting and Rolf Snoeren are not the types to do things by half measure or without a surprising twist, having designed ruffled collars a foot deep and bulbous silhouettes inspired by nuclear explosions. So for their newest fragrance, the duo went for a Spicebomb, a spicy masculine counterpart to their women’s floral fragrance hit Flowerbomb, introduced in 2005.

Spicebomb, created with the Viktor & Rolf fragrance licensee L’Oréal, will come out toward the end of January. It is the second men’s scent the brand has launched.

“We were jealous of all the women who had Flowerbomb, and we wanted to have our own bomb,” said Horsting.

“We felt that if flowers were a very typical feminine scent, spices were the masculine opposite,” continued Snoeren.

Therein the name Spicebomb was born.

“Viktor and Rolf wanted an extroverted, outspoken fragrance,” said Polge. So he helped conceive the juice with two main diametrically opposed olfactive accords. The “addictive,” a “firey” one includes notes of chili, saffron, leather, tobacco and vetiver. The other is “explosive” and icier, with notes of bergamot, grapefruit, elemi and pink pepper (the latter being key).

No market testing was done on the fragrance.

Spicebomb’s bottle, created with Fabien Baron, is shaped like a grenade whose pin has attached to it the signature Viktor & Rolf seal.

As with Flowerbomb, there will be an important marketing push at points of sale.

“We will have what we call the exploding shelves,” said Richard Pinabel, international general manager of Viktor & Rolf Parfums, referring to merchandising units that make the scents look like they’ve been rocked by an explosion. On the outer packing of some bottles will be a sleeve with a hologram making the Spicebomb flacon look as if it has blown up.

Sampling will be extensive and creative, too, including blotters resembling matches.

“It’s very core, very important in the DNA of the brand to do things in a different and little bit spectacular way,” continued Pinabel, adding the idea is also to be whimsical.

“We want to make sure that it is an event every time Spicebomb is in store,” said Marc Rey, president of international designer collections at L’Oréal USA.

The scent will first be launched on Jan. 23 exclusively in Harrods in the U.K. and in Bijenkorf in the Netherlands. Then it is to be introduced elsewhere, including a mid-February debut in France and a March 1 kickoff in the U.S.

The fragrance will be carried in specialty stores in the U.S., including Nordstrom, Bloomingdale’s, Neiman Marcus and Saks Fifth Avenue. It is to be in about 250 doors countrywide. (Flowerbomb, meanwhile, is in wider distribution there.)

Flowerbomb ranks ninth in women’s fragrance year-to-date and was eighth in September in the U.S. “It’s almost growing 20 percent this year,” said Rey.