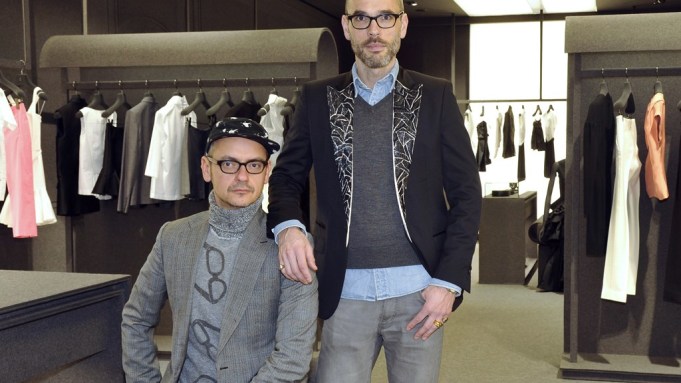 There may be no better descriptor for Viktor & Rolf’s new Paris flagship, for virtually every surface, save for the lighting — walls, floors, stairs, handrail, floral bouquets, you name it — are dressed in gray felt.

“Ghost architecture” is the term Rolf Snoeren used to describe the striking 5,400-square-foot flagship at 370 Rue Saint-Honoré, which opened quietly over the weekend, (no pun intended).

“We like how the gray felt puts you in another world,” enthused Snoeren, leading a tour of the two-level unit with his design partner Viktor Horsting, all the while toting Zwaantje, his 10-year-old dachshund, in a carrier bag as she recovers from a hernia.

True to their conceptual roots, the Dutchmen sought to create a store design that almost disappears, leaving the spotlight to the collections on display.

References to neoclassical architectural abound in the arched shapes, columns and bas-relief wall details “but a lot has been left out” to heighten the ghostly mood, Horsting noted.

Arriving 20 years after the two men founded their fashion label in Amsterdam, the boutique sets a template for future expansion — and telegraphs how extensive their product range has grown.

The main floor showcases accessories, particularly metal-handled Bombette bags set on shelves in wall niches, including 40 limited-edition styles available only at the Paris store in unusual materials including blue snakeskin and — you guessed it — gray felt.

Fragrances, produced with licensing partner L’Oréal, are showcased at the back of the store, some in packaging that is also exclusive to the location.

A staircase leads down to a large lower level, a women’s shoe salon immediately to the left, a banquette with swirling armrests almost imperceptible given it is upholstered once again in gray felt.

Just past a small wall niche dedicated to eyewear is a small bandshell-shaped staircase that leads further down into a ready-to-wear salon, men’s occupying about one-third of the space on the left, women’s fanning out on the right. Here, racks are merchandised sparingly, yet there are enough of them to show smatterings of fall runway, new resort arrivals, plus capsule collections for black dresses, white shirts, trenchcoats and — the latest addition — bridal dresses.

“If you have a store, you want to showcase everything you have,” Snoeren said.

He and Horsting characterized the retail venture as a boon for the company’s 150 wholesale clients, giving multibrand retailers a full blast of their “conceptual glamor” and department stores an idea how corners might look.

“Nowadays, to build a fashion business, you need to have your own stores,” Snoeren said.

While they declined to discuss figures, market sources estimate the unit, in partnership with Staff International, part of Viktor & Rolf parent OTB SpA, should generate annual revenues of about 7 million euros, or $9.6 million at current exchange.

It’s the first of “at least five” Viktor & Rolf stores to come, with Horsting listing New York, London, Tokyo and Los Angeles among priorities for future openings, along with emerging markets.

The designers, who collaborated with Paris-based firm Architecture & Associés on the store concept, made it clear they wish to stand out amidst luxury stores that are often decorated to the hilt with sumptuous materials, residential features and artworks.

“We would like a store that’s hardly there,” Horsting said. “Shopping is nice when it’s a personal, private experience.”

Indeed, even fitting rooms are discreet, dotted throughout the rtw salons and hidden behind gray felt doors that blend into the walls.

Asked if he was concerned that the fuzzy gray felt might register as smothering in summertime, Horsting shook his head, noting even tropical colors pop against such a neutral backdrop. Then he flashed a smile and added, “Besides, we’ll have air conditioning.”

While in the French capital, their spiritual fashion home, the duo was headed for meetings at L’Oréal ahead of the launch of a new women’s fragrance to be unveiled in January in tandem with their summer 2014 couture collection.

The scent is to debut next April, initially as an exclusive for the Saint-Honoré store.