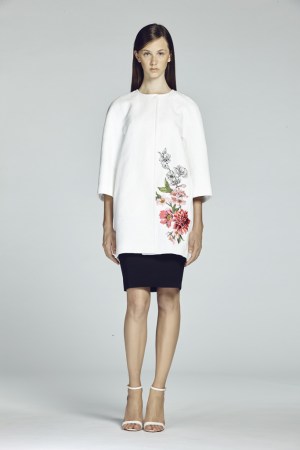 Having worked for an assortment of American designers and brands as well as European ones, Via Delle Perle creative director Christian Blanken knows the competition that awaits in the U.S. market.

Two years after Argos Soditic took a majority stake in the company, the $40 million Italian label is going after American shoppers for the first time. Meeting with buyers and press at The Mark hotel this week, Blanken said he only has to look out the window of his Upper East Side suite to see the targeted customers: Madison Avenue shoppers who appreciate beautiful workmanship, really good quality and a certain taste level.

With nearly 20 freestanding stores worldwide, Via Delle Perle is ironing out plans for five more in Asia. The volatility in Russia, which generates 50 percent of the company’s business, has prompted to some degree a more targeted growth strategy. Having visited Moscow last week, Blanken said the exchange rate has shot prices up and, like in China, shoppers have become self-conscious about their personal spending due in part to corruption scandals and the fact that people understand the scrutiny that accompanies appearing to have a lot of money to spend, Blanken said. Despite that trepidation, Via delle Perle is committed to the Russian market. Blanken said, “The restaurants were full, the stores were full and people were buying. But we have found that it is becoming more difficult to close orders and sell out. It’s a challenge but we’re going to stay there.”

Shoppers around the globe will find his designs in four areas — Via Delle Perle Collection, VDP Club (priced 20 to 30 percent less than Collection), VDP Gold knitwear and VDP Jeans, which debuted for spring. Wholesale prices for Collection range from $165 to $750, Club is $115 to $315, Gold runs from $110 to $260 and Jeans goes from $130 to $215. In the next 12 months, the U.S. market should generate annual sales of six or seven figures, Blanken said.

Having been a senior consultant at Max Mara for the past eight years, Blanken, a Central Saint Martins graduate, also worked for Michael Kors, Diane von Furstenberg, J. Crew and Esprit, among other firms. The way he sees it, Via Delle Perle’s shoppers really don’t differ from one country to the next.

“An American abroad is very much the same as European shoppers or anywhere else in the world. We’re really dealing with the same type of people,” he said.