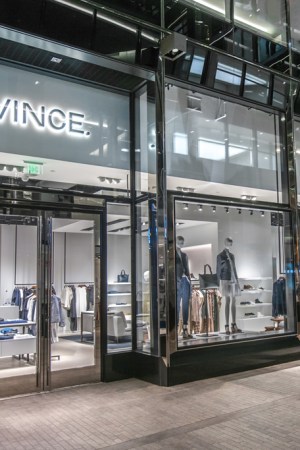 Vince has landed in the nation’s capital.

The sportswear and accessories brand opened a store in CityCenterDC Thursday morning. This will be Vince’s first Washington, D.C. retail location, and the 40th store in the U.S.

The Vince boutique will feature many of the same design details as its recently opened Brookfield Place location in Manhattan. There are multiple windows with a huge wrap-around storefront, as well as two entrances — one for women’s and one’s for men’s — with an interior walk-through. Lightboxes in the windows spotlight current campaign imagery. Signature design elements include bright brass fixtures, a Mondrian-inspired felt wall near the cash wrap and flannel-upholstered furniture.

The company declined to give a first-year sales projection.

Internationally, Vince has two freestanding stores, in Japan and Turkey, that are run by its wholesale partners in those regions.