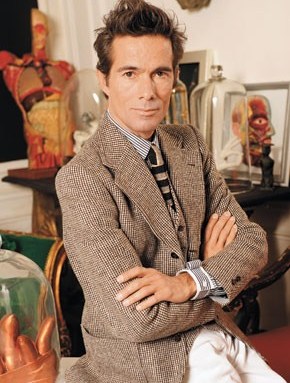 The fashion designer, who had a brief stint at Emanuel Ungaro and a long career at Moschino, is trading frocks for furniture design and plans to showcase his eclectic taste at his new home gallery, Maison Darré, slated to open in early June at 32 Rue du Mont Thabor here.

“It’s a very personal project,” said Darré, a well-known figure on the Paris fashion scene with a shock of spiky black hair atop a pencil-thin frame. “I want the store to feel like a house.”

Next door to fashion canteen Ferdi, the 860-square-foot gallery (whose name sounds like the French word for “prison”) comes at a time when objects for the home are more desirable and collectible than ever. Darré, for one, thinks there’s way too much fashion around — although he wouldn’t rule out a return to the runway in the future. Trained at Paris fashion school Studio Berçot, Darré has worked for a range of brands, including Chloé, Prada, Chanel and Fendi.

He still keeps a toe in the business as a creative editor at L’Uomo Vogue, for which he recently wrangled rising French actor Louis Garel for a striking Bruce Weber portfolio, and Charlotte Rampling for an interview. “There’s a real curiosity for furniture and a hunger for newness,” Darré said, sipping tea and munching on sugar-encrusted pastry puffs. “There’s some new energy.”

Darré has poured his heart into the project, traveling to Vietnam, Venice and India to root out artisans to realize his Tim Burton-esque designs, which include minimalist tables of gleaming lacquer with femur-like legs and folding stools with red Flintstone-like bones in an X formation. The plan is to create one-off pieces and editions of 10 and 20 for other designs, including rugs, lighting fixtures and consoles. Furniture prices range from about 1,200 euros, or $1,878 at current exchange, for the stools to 6,500 euros, or $10,175, for a dining room table.

Darré said he’s striving for a “chaotic mélange” in the boutique, and he’s reaching out to his far-flung network of artistic friends to create jewelry, tableware, home textiles and other objects to round out the selection.