Brands also said they were selling immediates, resort and pre-spring at the show. 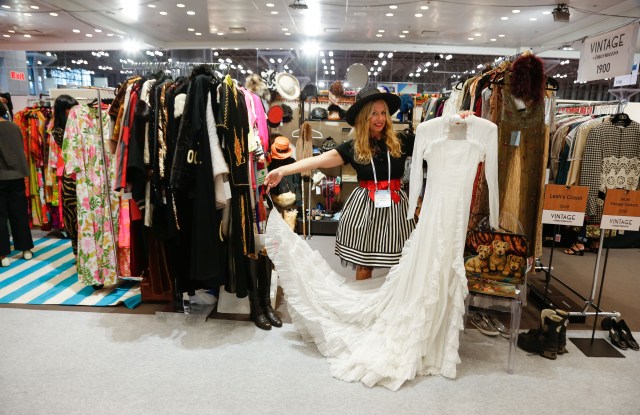 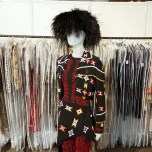 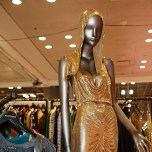 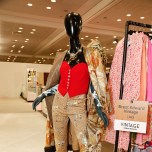 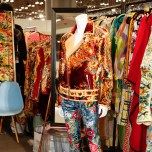 The August edition of Intermezzo Collections, that opened Sunday and runs through Tuesday at the Jacob K. Javits Center in New York, featured Vintage @ Intermezzo, a special area of 21 one-of-a kind apparel and accessories collections that were open to the public for the first time and created a lot of buzz at the show.

Peter Berta, show director of Intermezzo, said, “It’s going really well. Everybody’s very excited about the new vintage section. Traffic has been very good.” He said the fashion community always knew vintage existed, “but didn’t know how to obtain it.” He anticipates it will get bigger at the succeeding Intermezzo shows, which take place in January, May and August.

The exhibit’s selections ranged from luxury vintage designers including Missoni and Versace, gowns and furs, to rare Victorian and Asian pieces by the likes of Issey Miyake, alongside personal pieces from Norma Kamali’s archives.

Karen Tweedie, vice president, trend, design, sourcing and technical design at Boston Proper, the women’s clothing catalogue and Web site based in Boca Raton, Fla., was excited about the vintage area of the show. “I think it’s brilliant that they have it. It’s great for me for research for product point of view and personal shopping,” she said.

From Lady V, Second Time Around, she bought a sexy pane halter dress with rhinestones, and a Cavalli snakeskin blazer for the retailer. She also bought sheered mink sandals for herself.

Leah Damiani, owner of Leah’s Closet was showing off a $2,400 vintage wedding gown that she was able to restore to white by soaking it in a bathtub with OxiClean. She said she sold some Victorian pieces, as well as black gladiator sandals from the Sixties that were from Saks Fifth Avenue. “The Sixties are really selling well now,” said Damiani, whose store Leah’s Closet is in Royal Oak, Mich. “I love Victorian, I put it with jeans and a tank top,” she said.

At Norma Kamali, they were selling feather boleros and parachute jumpsuits. “It’s a mix of clientele buying. There have been cash-and-carry [customers] and retailers coming, and some setting up appointments following the show. We’re having great conversations in combining new and old,” said Marissa Santalla, public relations manager for Norma Kamali.

The majority of their offerings are part of Kamali’s signature collections over the years, and some items are part of the designer’s vintage collections that she personally wore. “It doesn’t have to be old and antiquated,” she said. She also said the offerings appeal to stylists and stage performance as well as the celebrity world.

Bridgette Morphew, founder and creative director of Morphew Concepts, who curated the vintage section, observed that she saw a lot of traffic the last two days, including editors, bloggers and retailers, as well as many consumers, who paid $20 for admission to the vintage area. She pointed out one dress she had on display was created from antique textiles put together to create a modern gold dress that was retailing for $4,000.

Beth Liebling, owner of Darling Way, a lingerie retailer in Houston, was shopping the vintage area “looking to buy lingerie.

“I’m all things romantic, lingerie for women and underwear for men,” she said. She said she was seeking things that were “fun, flirty and really frisky.” Her shop opened 14 months ago. She bought several things from Morphew. “I’m looking for anything that’s romantic that suddenly makes you feel different, that puts a smile on your face and has a sensual feel,” she said.

Mia Vesper launched her vintage business in February. She buys vintage tapestries all over the world and styles them into outerwear. “It’s one of a kind,” she said. She said she finds the Persian and Italian tapestries online. She had put her designs on Instagram and people kept asking her where they could buy it. She did a guerilla fashion show outside Marc Jacobs’ show in February, and found herself in business. Her unisex outerwear retails for $3,750 and she had some sale items for $1,000.

Brent Edward Amerman, vintage connoisseur, bought his Brent Edward collection from San Francisco to the show. “It all flew with me,” he said, about his multiple suitcases filled with mostly dresses and cocktail looks. “I have every decade, but I have a really soft spot for the Sixties and Seventies,” he said. The mannequin at his booth was decked out in a Moschino couture bustier, Kenzo cheetah pants, a Sixties Bill Blass coat dress and Versace necklace.

The vintage vendor, James Veloria, which just opened a store at 75 East Broadway in New York’s Chinatown, was selling fun Moschino and Versace prints from the early Nineties. “Older Margiela was also selling.” Asked where they get their merchandise, Brandon Veloria , a partner, said they go to many closets throughout the city. “There are the best closets in New York,” he said.

Elsewhere at Intermezzo, Mavi was having a good show. “Business is very good,” said Alissa Friedman, marketing manager. What was selling well were ankle jeans and embroideries “a lot of fashion, detail and embroidery,” she said. She said the rises continue to go higher. Mavi’s jeans retail from $98 to $148. She said they were launching spring at the show, but most of the people were buying immediates and holiday.

Avenue Montaigne introduced its sequin pants at Intermezzo, wholesaling between $130 and $155. The sequin pants come in navy, black, gold and blush. “It’s on every customer’s order,’ said Daniele Chemla, owner of Avenue Montaigne. The company was also doing well with striped pants, and a variety of colors. “Traffic has been very steady,” she said. “The collection is totally different, and I really took it up a step,” she said.

Shannon Doherty, owner of Coco and Lala, a women’s and children’s boutique in Watch Hill, R.I., was shopping Intermezzo looking for accessories, spring-summer linen sportswear and children’s wear. “I love Roberta Roller Rabbit, and I buy everything,” she said. She purchased some maxis, tunics, ‘mommy and me’ clothing and pajamas. “It’s beach-to-table,” she said, about the offerings in her resort store. The shop is open from May to October, and she plans to do a pop-up shop in Darien, Conn., for Christmas and spring.

“I’m looking for one-of-a-kind different stuff that will blow your mind away,” she said. She also purchased caftans and accessories from Pranella.

At Amayo, a silk caftan company, Pam Schaecher, owner, was doing well with caftans made in India that wholesale from $135 to $140. “This show has been great for us. I wanted to support the people doing the craft,” she said. “The silk caftans are made in a small village in India and the women work in huts on dirt floors.” As a result of the work, “they are able to send their children to school,” she said.

Misa Los Angeles had a busy booth launching spring merchandise. She was also showing resort and pre-spring. The company is known for its dresses and tops. “We had a great day. We saw lots of great, international retailers and lots of key retailers such as Shopbop and Anthropologie,” said Chelsea Segall, sales director. “Our customers are loving our dresses and we do incredibly well with our sets,” she said. Ninety-seven percent of the line is made in Los Angeles, and they do some handmade items in India.

Lauren Morris, director of sales at Terez, said the company has expanded their leggings into T-shirts, sweatshirts and French terrys. “Anything camo is doing well and we’re evolving them. We also do heart prints, metallic pieces and splatter paint, which do well for us. Our women love stars and skulls,” she said.

Monica Forman, managing director of Grey State, said she had a crazy day Sunday and opened new accounts. They launched a Web site, as well. She was selling resort at the show. “People have money for fall, and there’s immediate business to be done. We’re opening spring in two weeks. Stores are in a good mood. They’re doing business, and they’ve saved money. They came in ready to buy. There are great quality accounts here,” she said.