Brands to took the first steps toward new design directions under their new creative heads.

By Katya Foreman and Laurent Folcher on February 1, 2012
View Slideshow 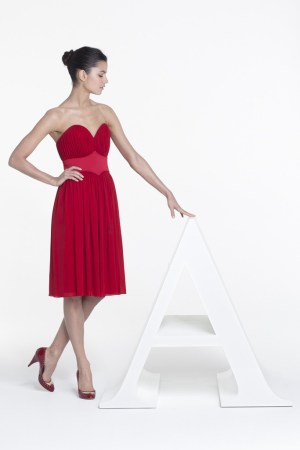 PARIS — The pre-fall season enabled Vionnet and Azzaro to take the first steps toward new design directions under their new creative heads.

Barbara and Lucia Croce, who in October succeeded Rodolfo Paglialunga as Vionnet’s creative directors, said their pre-fall collection was an effort to establish new codes for the brand — femininity, fluidity and purity — while building on the heritage of founder Madeleine Vionnet. The twin sisters reworked a 1919 logo on bags, while V-shape necklines were inspired by archival looks from the Thirties. Still, the Croces are keen to make the collection relevant for today. Thus there were trousers for evening, such as the softly tailored tuxedo pants worn with a sleeveless top with a flowing silk georgette tail.

Vionnet co-owner and chairman Matteo Marzotto said a pre-fall debut allowed the designers a more intimate introduction to press and retailers, without the pressure of a technical show. “Barbara and Lucia were more available during appointments, giving them essential face time with everyone,” he said. “Our hope was that all parties involved would not only preview the collection, but also be given a greater amount of access to the designers by debuting during a less chaotic season.”

For Azzaro’s management, it seemed natural that its new artistic director, Mathilde Castello Branco, who joined the house in September, tackle pre-fall right off the bat since cruise collections have long been a part of the Azzaro tradition. Thus Castello Branco submerged herself into the universe of house founder Loris Azzaro and his renown as a couturier of the night. Along with updated takes on the jersey evening gowns the brand is known for, Castello Branco also strove to develop versatile pieces to be worn throughout the day. “Women today should be able to step from the office to a cocktail or a party without changing their outfit,” she said. “Everything can be worn at night, you just need to switch a few accessories.”

Standouts included a romantic long V-neck dress in midnight blue jersey with star-embroidered inserts, and a full-skirted balloon-sleeve trench so feminine it could be worn as a dress. As for the accessories, an oval metallic snakeskin minaudière was dripping with chains, reminiscent of a precious Fabergé egg.