PARIS — Virgil Abloh is launching a new brand under his own name with a debut collection of jewelry inspired by the humble paper clip.

The artistic director for men’s wear at Louis Vuitton and creative director of upscale streetwear brand Off-White, Abloh on Monday posted an image of a box labeled “Recycled Jumbo Paper Clips” and the brand name “Virgil Abloh,” followed by another image showing him wearing a necklace made of paper clips.

The designer told WWD that he planned to present his first eponymous jewelry collection, alongside his latest handbag and sneaker designs for Off-White, at “Floral Shop,” a pop-up store at Hôtel Costes set to run from Jan. 17 to 29 to coincide with the men’s ready-to-wear and women’s haute couture shows in Paris.

“I curated my favorite flowers, simple bouquets that can be bought, but I’m also previewing high jewelry that’s of my own name. It’s not associated to Off-White per se,” he said.

“Those will be on view for the first time. I’ve been developing those for three years,” added Abloh, who has frequently worn a paper clip necklace. 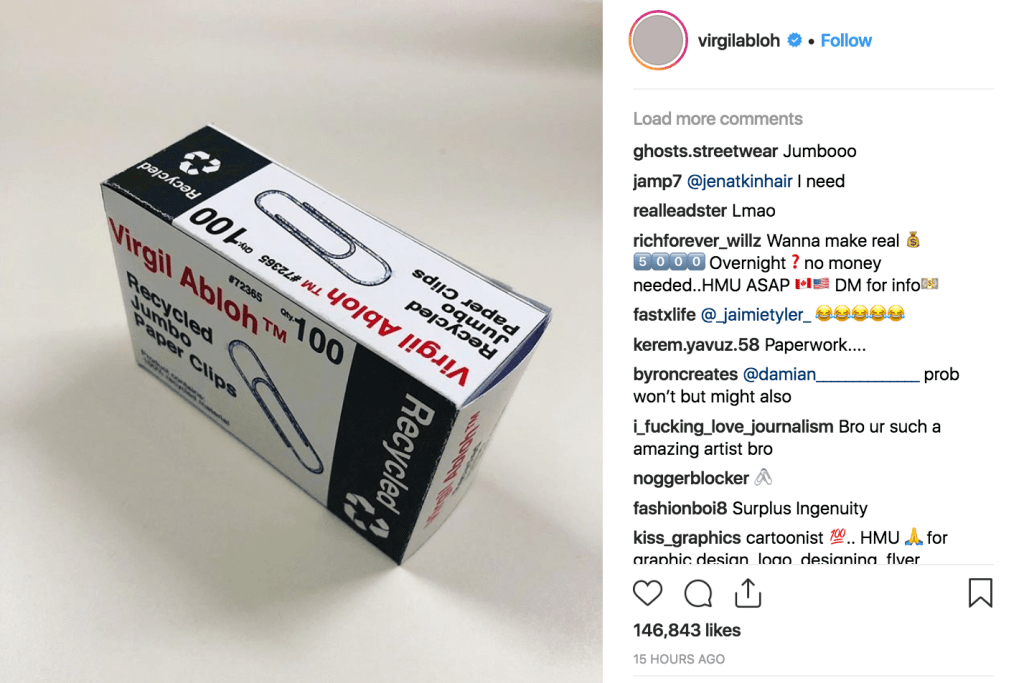 The pieces will be available for pre-ordering. “It’s a necklace, there’s earrings, there’s an accessory. The idea is like high jewelry for all. It’s a crash — it’s a paper clip, but it’s also pavé diamonds made in a very specific way,” he revealed.

The site will also carry Off-White’s new women’s handbag design, the Jitney, which features a rotating magnetic lock in the shape of the brand’s arrow cross logo.

“It’s not so much like see-now-buy-now. What we’re doing is we’re offering it on reservation early, so you can get the bag before it goes to stores,” Abloh explained.

Off-White’s new sneakers have been developed without Nike. Abloh recently revealed the end of his hugely successful The Ten sneaker collaboration with the sportswear brand, and said he was working with Nike on defining the next chapter.

“My requirement is that if we’re going to do something, it has to be innovative on the same scale and as impactful as this, otherwise it’s not worth doing. So we’re in that phase of developing and seeing which direction could potentially be the route to go,” he said.

Known for working with a broad spectrum of brands, from Ikea and Byredo to Jimmy Choo, Warby Parker, Moncler, Umbro and Sunglass Hut, Abloh was recently named as the first creative adviser for sustainable innovation design at mineral water brand Evian.

“My ideas don’t stay neatly in one box,” he said with a smirk. His interest in flowers may come as a surprise to some, though Abloh suggested it might be his exit strategy from the luxury rat race.

“When I’m old and done, I will be in some remote town somewhere owning a flower shop. I have the concept already done. But that’s what I’m into most,” he said, noting that his favorite flower is cotton.

“It’s going to be super weird, super remote. I’ll be over it all and I’ll just be, like, putting creativity into bouquets. Who knows, it might be soon?” he teased.