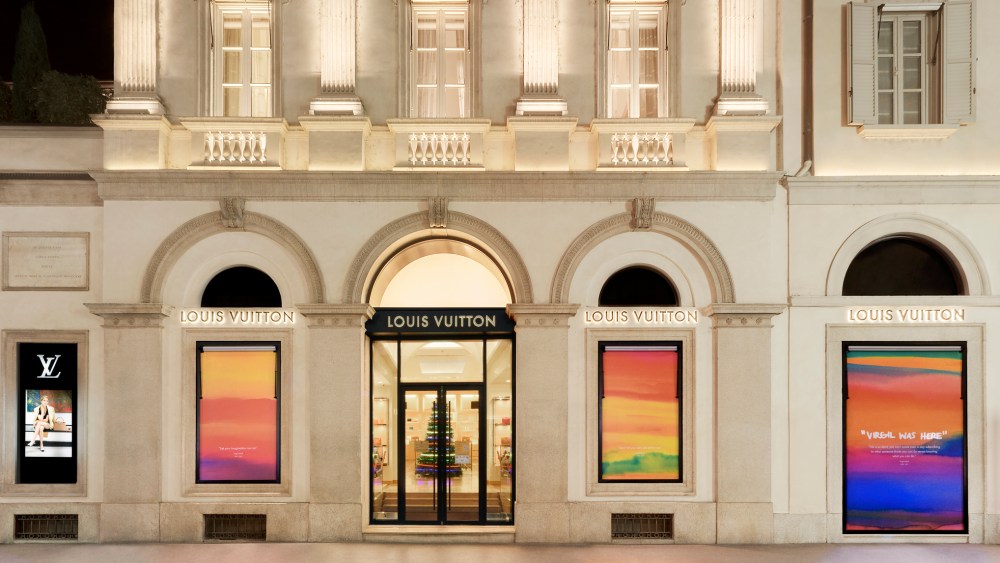 No Christmas windows yet for Louis Vuitton, still mourning the loss of Virgil Abloh, its artistic director of men’s collections, who died of cancer on Nov. 28 at age 41.

The French luxury brand has dedicated the windows of boutiques around the world in a poetic remembrance, displaying large panels of smudged, vibrant color and the poignant tagline “Virgil was here.”

Vuitton began installing the displays on Dec. 3 and most were in place by Monday, when a private funeral took place in Chicago, Abloh’s hometown. Michael Burke, Vuitton’s chairman and chief executive officer, was among those in attendance.

Boutiques in New York, Seoul, Tokyo, Osaka, London, Moscow, Taipei, Los Angeles, Chicago, Singapore, Istanbul, Sydney, Bangkok, Milan and Madrid are among those decorated with versions of “Virgil’s Sky” in a range of warm, rich colors, reprising a backdrop employed for windows for his debut “Wizard of Oz”-inspired Vuitton collection in 2019.

The “Virgil was here” windows reprise the phrase writ large in the sky via a drone display at the conclusion of Vuitton’s spin-off show for its men’s spring 2022 collection, which ended up being a tribute to the late designer.

Abloh had created 10 looks for the Miami show, done to celebrate the opening of Vuitton’s second men’s only store in the world, in the Miami Design District.

The windows also feature a selection of inspiration quotes from the American designer, including “Let your imagination run riot,” “Everything I do is for the 17-year-old version of myself,” and “I’m a dreamer. I think about how long my ideas can impact or bring a different voice to the rest of the world.”

Another reads, almost presciently: “Life is so short, you can’t waste even a day subscribing to what someone things you can do versus knowing what you can do.”

Alboh died in a Houston hospital after secretly battling a rare, aggressive form of cancer known as cardiac angiosarcoma, sending the fashion world into shock and grief.

Born in Rockford, Ill., of Ghanaian parents, Abloh was an artist, architect, engineer, creative director and designer. After earning a degree in civil engineering from the University of Wisconsin-Madison, he completed a master’s degree in architecture at the Illinois Institute of Technology.

He launched his Off-White brand in 2013, and its thick diagonal stripes quickly become a byword for insider cool.

In 2018, he fulfilled a dream by taking the men’s wear helm of Vuitton, the world’s largest luxury brand. He also collaborated with an array of famous brands, including Nike, Mercedes-Benz and Ikea.

Virgil Abloh Dies of Cancer at 41

A Timeline of Virgil Abloh’s Career