By Miles Socha and Joelle Diderich on March 6, 2012
View Slideshow 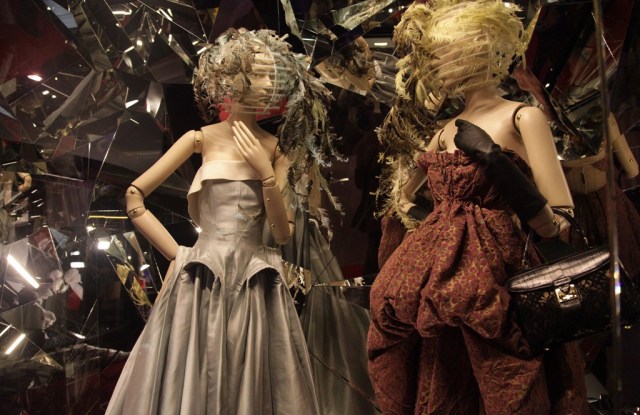 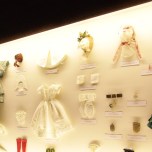 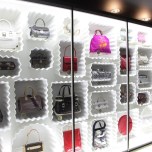 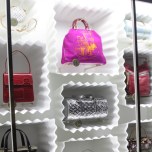 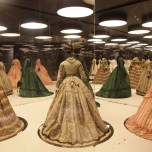 PARIS — It opens with a zoetrope — the whirling cylinder animating whimsical ink drawings of bulbous 19th-century dresses spewing out of trunks. It ends with a row of mannequins in sleek and sexy nurselike uniforms, sirens on their necks instead of heads, as a hip-hop soundtrack pulses.

Along the way, visitors to the “Louis Vuitton-Marc Jacobs” show at Les Arts Décoratifs that opens Friday get a vivid taste of how a luxury brand is born — and transformed for the modern age.

Conceived as a tale of two men, the multimedia exhibition examines fascinating, vastly different periods in the fashion industry: the 19th-century world of steamer trunks inhabited by founder Louis Vuitton, and the razzle-dazzle global business energized with potent seasonal fashion shows by Marc Jacobs, Vuitton’s artistic director since 1997. The exhibition runs through Sept. 16.

“What did Louis bring to the table?” were among the questions Pamela Golbin, chief curator of fashion and textiles at Les Arts Décoratifs, sought to answer with the show.

Plenty, as it turns out. After spending 17 years apprenticing at one of Paris’ 400 packing specialists, the house founder set up his own operation in 1854, noting “English Spoken” on his very first label, thereby signaling his sharp commercial instincts and international ambitions.

The first floor of the sprawling exhibition brings to life that genteel period, when well-to-do women would change dresses up to seven times a day and require dozens of trunks for a long voyage.

“He was very much involved in the fashion industry from its very origins,” Golbin noted, stopping before a trunk from 1888 bearing a plaque from the house of Charles Frederick Worth, considered the father of haute couture.

An astute marketer, Vuitton used the platform of universal exhibitions to launch a variety of innovations he copyrighted: lightweight, waterproof trunks in 1867; a trunk containing a foldout cot in 1891. Golbin noted that up to 20 million people would visit such events — almost half the population of France at the time.

Besides plenty of trunks — including the first one to bear the house’s now famous monogram, produced in 1896 as an homage by Georges Vuitton to his late father — such artifacts as order ledgers and product catalogues, another Vuitton innovation, are displayed.

As visitors climb the stairs to learn about the Jacobs era, the ambience and set design change dramatically. A wall of backlit images and videos, and snippets of the “South Park” theme, announce the fast-moving, cacophonous world of Jacobs, a street-smart New Yorker enlisted to launch Vuitton into the world of ready-to-wear and fashion accessories.

“It’s so chaotic,” the designer said of this high-tech inspiration board. “To me, it’s what my head feels like when I’m going into a collection.”

Jacobs said his mission was to summon a “parallel universe” to the one Louis and his descendants created, “being respectful of the monogram, but not relying on it.”

Does Jacobs see any parallels between himself and the man with whom he shares top billing? “It’s a question of obsession, and a passion for getting things right,” Jacobs mused, quickly adding, “and a love of craft.”

Yves Carcelle, Vuitton’s chief executive officer, noted that both men were “not Parisians, but fell in love with Paris. They both discovered Paris as young men.”

The two also possessed a vision about the “world transforming itself” — advancements in travel and industrialization for the founder; and the communications explosion and globalization for Jacobs.

“When you see the two together, you understand the richness of the past,” Carcelle said.

“For us at Vuitton, looking at the past and reinventing the past has always been a common passion,” he added. “While my role is to orchestrate that, [Vuitton] is not a one-man show.”

Indeed, the Jacobs floor showcases high-profile — and commercially explosive — collaborations with the likes of artists Stephen Sprouse and Takashi Murakami.

Designed by Gainsbury and Bennett, the exhibition is rich in moving parts — shoes are displayed on a wheel of legs mounted on gears — and sheer imagination, such as a clutch of mannequins with animal heads wearing exotic skins, as luxed-up by Jacobs.

Video and sound are integral, especially on the Jacobs floor, where a voice-over in front of several displays has the designer narrating the backstory to his designs. There’s plenty of humor, too, with Jacobs naming several of the cases: “Blue-y Vuitton” for dresses in sky shades, and “Cage Moss,” which has a mannequin crouching behind bars in a finale dress once worn by Kate Moss.

The exhibition closes on a riotous note, winking at Jacobs’ stature as a pop-culture icon with a miniature version of the designer, dressed in tiny, bespoke versions of the clothes he usually wears: a white Dior Homme shirt, a black Comme des Garçons kilt and Prada shoes.

“I do have a Vuitton bag. They made me a miniature crocodile Lockit bag,” Jacobs said. “It’s hysterical.”

Vuitton plans to broadcast Wednesday night’s opening party for the exhibition on its Web site and Facebook page, with British presenter Louise Roe commenting on VIP arrivals and touring the show. Roe recently covered red-carpet arrivals at the Oscars ceremony for ABC.