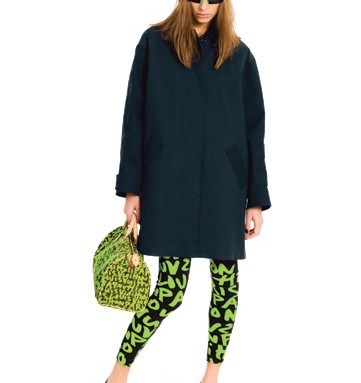 To show their admiration for the late designer and artist, next month, Jacobs, Vuitton’s creative director, is using his hit 2001 collaboration with Sprouse for a new, limited edition collection of accessories and ready-to-wear. Jacobs even doffed his duds again, posing in the nude painted in Sprouse’s graffiti for Harper’s Bazaar’s January issue.

This comes at a time of renewed buzz about Sprouse, whose graffiti prints and Day-Glo clothes became a defining aesthetic of the early Eighties. It coincides with a retrospective — called “Rock on Mars” — at Deitch Projects’ 18 Wooster Street gallery from Jan. 8 to Feb. 28, and “The Stephen Sprouse Book,” by Roger Padilha and Mauricio Padilha, due out from Rizzoli New York on Feb. 1.

The impetus for the new line came when Deitch approached Jacobs and Vuitton about doing something related to the retrospective.

“I proposed putting together a Vuitton version of the Pop Shop, which was Keith Haring’s concept…not reissuing products that we had done with Stephen, but doing things that were similar or new,” Jacobs said.

Sprouse died in 2004, and the new tribute pieces, which hit Vuitton boutiques worldwide Jan. 9, pick up almost seamlessly where the 2001 collaboration left off.

Jacobs took two iconic Sprouse motifs — the graffiti and the rose — and interpreted them in Day-Glo shades of pink, green and orange over the Monogram print. The motifs are featured on Vuitton’s Keepall, Speedy and Neverfull bag styles, as well as basketball sneaker boots, pumps, sunglasses, headbands and wristbands, and small leather goods like wallets and coin purses. The rtw includes a mackintosh raincoat with a graffiti and monogram lining, graffiti leggings and a long-sleeve neon minidress featuring the rose design.

“I tried to take what Stephen had done at Vuitton and then kind of flip it in my head, and make it Vuitton’s work for Stephen, not Stephen’s work for Vuitton,” Jacobs said. “I just felt it was a funny way to play with it, to pretend to be Sprouse for a bit, and use the work that he did, and then bring it back to the work that he did before I collaborated with him.”

The original collaboration has its origins in the time when Jacobs was looking for a Paris apartment. When he looked at Charlotte Gainsbourg’s space on the rue du Bac, he stumbled across a Vuitton Monogram canvas trunk, which the actress’s legendary father, Serge, had painted over in black. It eventually inspired him to collaborate with Sprouse for spring 2001.

“For me, this monogram graffiti was the first milestone of our permanent reinvention of our history,” said Vuitton president and chief executive officer Yves Carcelle.

“It almost becomes a classic, like a Chanel jacket, or a smoking,” he said. “It’s this idea of a head-to-toe look in this brash, neon, rock ’n’ roll, edgy, street-informed style. Sprouse really best personified it.”

Vuitton will pay further tribute with a special Web site — welovesprouse.com — slated to go live Dec. 15. It will feature a mix of interviews with people who knew Sprouse, including Debbie Harry, Candy Pratts Price and Patricia Field. In the clips, they muse on their relationship with Sprouse, and his lasting influence on the fashion and art worlds. There will also be a feature called “Scrawl the Wall,” where visitors can post comments, and a special section on Sprouse’s New York, highlighting some of the artist’s favorite haunts in the city.

“The thing that excited us the most is that somebody who disappeared years ago is going to be the center of life worldwide thanks to that for the next few months,” Carcelle said. “We really want to celebrate a friend.”

As for the Harper’s Bazaar story, it was shot by Terry Richardson and features Jacobs naked, his body painted in Sprouse-style graffiti and his relevant portions covered by one of the new Vuitton bags. Richardson also shot racier images of Jacobs completely in the nude, though these will not be featured in the Bazaar story.

“I don’t have a problem taking my clothes off, as anybody who has picked up a magazine in the past year could tell you,” Jacobs said. “I had no qualms or shame about it but knew fully well that any full frontal nudity wouldn’t be appropriate for Harper’s Bazaar.”