The French luxury firm is scheduled to host a cocktail on Thursday night to toast the reopening of its Rodeo Drive maison.

By Miles Socha and Rosemary Feitelberg on February 3, 2015
View Slideshow 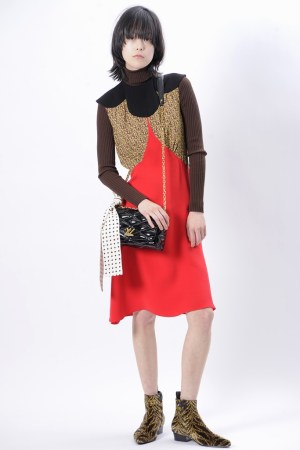 PARIS — Nicolas Ghesquière is heading to Los Angeles this week for a Louis Vuitton double-header.

The French luxury firm is scheduled to host a cocktail on Thursday night to toast the reopening of its Rodeo Drive maison, which just underwent a massive facelift and expansion, and to christen “Series 2,” a multimedia exhibition spotlighting Ghesquière’s spring 2015 collection and an advertising campaign for Vuitton featuring Jennifer Connelly.

As Ghesquière plots his next two fashion shows — fall 2015 ready-to-wear during Paris Fashion Week next month and an itinerant event for cruise — watch for Connelly and other celebrities to don looks from his first pre-fall collection for Vuitton, unveiled exclusively to WWD here and marking the denouement to a long and meandering intermediary season.

Michael Burke, Vuitton’s chairman and chief executive officer, confirmed that Vuitton’s next cruise show would be held in Seoul, and that the brand is zeroing in on a date and location. In 2014, the company staged its cruise presentation in Monaco.

According to market sources, Ghesquière intends to mount fashion shows for his pre-fall collections in the future, meaning Vuitton would join the likes of Chanel and Dior, which staged events in Salzburg and Tokyo, respectively, last December.

To be sure, the importance of pre-collections is unequivocal.

“They’re the biggest collections,” Burke said. “They stay in the stores the longest and they generate the most sales.”

The pre-fall season, spread over several months and cities, wound up during couture week in Paris with Vuitton, Miu Miu, Balenciaga and Lanvin among the major brands hosting presentations. Ghesquière, Vuitton’s artistic director for women’s collections, continued to work a Seventies vibe for the season with a spice-rack palette, wide lapels on blazers, ribbed turtlenecks and flaring jeans detailed with leather and a prominent zipper pull.

A slim, elongated silhouette predominated, along with lightweight layers: knee-length tweed dresses, lightly padded down macs and dotted silk windbreakers. Since he arrived at Vuitton in 2013, Ghesquière has taken a “wardrobe” approach grounded in real-world classics and open to interpretation and mixing. Noteworthy accessories for pre-fall included soft versions of the Dora bag, chain-handled silhouettes in quilted patent leather, and reworked Speedy bags in monogram canvas varnished to a high gloss.

Meanwhile, getting a tighter grip on the pre-fall season — and itinerant fashion shows — has become a hot-button topic in the industry.

As reported, Chanel had been eyeing May 11 for its cruise show in Seoul at the Dongdaemun Design Plaza, but when Dior revealed that it would stage its show May 9 in Los Angeles, Chanel said it was obliged to move a week forward, given the distances involved. That leaves Chanel’s event scheduled opposite the Costume Institute Gala in New York on May 4.

Burke predicted fashion’s large houses will have to come to an understanding in the future to plan pre-collections “in such a way that the clients, the press and the buyers can see them in a more organized way.”

In recent years, a number of European houses held pre-fall presentations in New York, but that frenzy has calmed, and some prominent brands returned to Paris this season. According to sources, French fashion’s organizing body is studying pre-fall collections and plans to propose a new approach to its members.

Retailers say they would welcome a more workable and compact pre-fall buying season.

“The situation of having buyers cover multiple cities at different times for a pre-fall is challenging,” said Joanna Gunn, chief brand officer at Hong Kong-based Lane Crawford. “When we wrap up by early February, we are expected to be back on market starting in mid-February for New York Fashion Week.” She suggested the ideal solution would be to move the January buy to connect with December dates in New York “so we complete the buys earlier and get earlier deliveries.”

Polat Uyal, chief merchandising officer at Beymen in Turkey, agreed the women’s market is “scattered” and not only overlaps couture, but men’s fashion week and the home decor show Maison + Objet, too.

“We would be happy to have a more organized and compact pre-fall market,” he said.

Given his druthers, CFDA executive director Steven Kolb said pre-fall could be contained to two non-consecutive weeks: the second week in December and the first full week back after the holidays in January. The CFDA has suggested this in the past by circulating a memo among members, Kolb said. That idea included the input of editors who are most affected by the unwieldy season.

As a “master calendar” that highlights runway shows, hair-care product launches, anniversary dinners and other events throughout the year, the Fashion Calendar has the potential to better organize pre-fall, as well as other secondary markets, including resort and bridal, Kolb noted.

“Our intention is to use the Fashion Calendar to help put more structure on other market weeks,” he said. “We haven’t really had a tool [to organize pre-fall]. Now we do.

“Now that we own the Fashion Calendar and operate it, there is a lot of authority that comes with that, and there is an opportunity that may have otherwise been underused before,” he added. “It’s really about us being able to use the calendar to be able to frame and redefine the dates for the collections.”

As for international designers showing pre-fall in New York, Kolb said that decision should come down to the individual brand. “There is a lot going on in New York already. It really depends on the brand and whether it makes sense to be in New York City,” he said.

When it comes to prefall, “nothing is central either in location or in dates – so you really have to set aside two weeks and put on your flats,” said Kirna Zabete cofounder Sarah Easley. “There was a time when Beth [Buccini] and I could cover the pre-fall shows. No we have a five–person buying team. Noting that the current expansive schedule can be costly for out-of-state and international retailers in terms of travel expensive, Easley said, “It can’t really go on in this current chaotic state. There needs to be an overhaul of the system. I do think we’ll get it together for the next one.”

Having a central location does help buyers, as do presentations, which allow for more flexibility and less of a time commitment, Easley said. “Not everyone needs to have a show, and it’s expensive for a brand. I just think designers should reconsider whether they need to do a show.” she added.