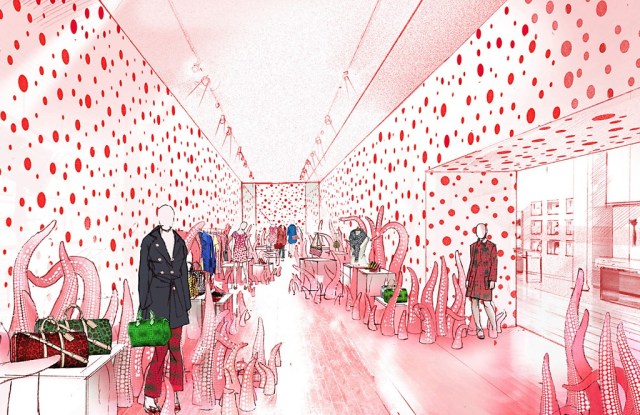 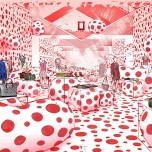 PARIS — If you’re seeing spots while out shopping later this summer, you may have stumbled upon one of seven Louis Vuitton pop-up stores in support of its fashion collaboration with Japanese artist Yayoi Kusama, who never met a dot she didn’t like.

This story first appeared in the June 25, 2012 issue of WWD. Subscribe Today.

The first is slated to open inside the Vuitton boutique in New York’s SoHo on July 10, two days ahead of a major Kusama retrospective bowing at the Whitney Museum in New York. In the weeks that follow, three others are to open inside or near Vuitton stores in Hong Kong’s Pacific Place; at Ngee Ann City in Singapore, and at Isetan’s Shinjuku branch in Tokyo.

Products ranging from trenchcoats and silk pajamas to a pendant necklace and polka-dot purses will get a second Tokyo showcase inside the new Dover Street Market in Ginza.

The operation is slated to climax on Aug. 23 and 24 with two large-scale shops at major European

department stores: across 860 square feet in the Printemps flagship in Paris and 1,375 square feet in Selfridges in London. Akin to one of her transporting museum installations, the former is to be inspired by Kusama’s obsession with dots; the latter by her treasured pumpkin motif.

Open for between four and eight weeks, the temporary units are to feature an original merchandising concept in collaboration with Kusama. Yves Carcelle, Vuitton’s chairman and chief executive officer, likens them to a “loudspeaker” to bring additional attention to its latest artistic tie-up.

Vuitton has collaborated in the past with Stephen Sprouse, Takashi Murakami and Richard Prince, but this is the first time it has opened multiple “concept” stores fully dedicated to the products.

The Kusama collection is to be sold in all of Vuitton’s 463 stores, with a second wave of products — hinged on monogrammed leather goods festooned with Kusama’s tentaclelike “nerves” motif — due out Oct. 1. Printemps and Selfridges are to have the Monogram Nerves bags exclusively from their opening dates in August.

Now 82 and living in a hospital for the mentally ill, Kusama has been painting since age 10, and has applied dots to canvases, tree trunks, entire rooms and even people.

Vuitton’s collaboration with her extends to window displays, iPhone apps, Web sites and a book.