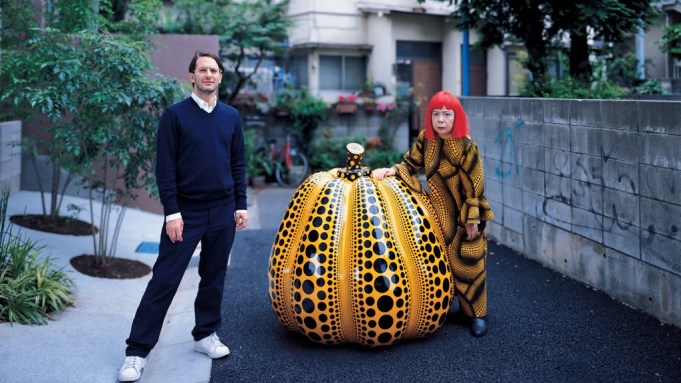 PARIS — When Japanese artist Yayoi Kusama first met Marc Jacobs, receiving him at her Tokyo studio in 2006, she presented the designer with a Louis Vuitton Ellipse bag, whose monogram canvas she had painted over with dots, the defining motif of her long career.

“That’s so beautiful, look at that,” Jacobs exclaimed, twirling her handiwork for the camera of Loïc Prigent, who captured the encounter in his 2007 documentary “Marc Jacobs & Louis Vuitton.”

Six years later, Kusama’s dots are on back on Vuitton leather goods — and this time on a global scale.

On July 10, two days ahead of a major Kusama retrospective bowing at the Whitney Museum in New York, Vuitton will unveil a line of clothes and accessories done in collaboration with the artist. Ranging from trenchcoats and silk pajamas to a pendant necklace and wristwatch, the collection is due in Vuitton’s 461 stores in the days that follow the opening, with a second wave of products — hinged on monogram leather goods festooned with Kusama’s tentaclelike “nerves” motif — due out in October.

Vuitton will also herald the collaboration via its windows — without any merchandise in sight.

“In a fascinating way, the monogram canvas is as obsessional as Yayoi’s dots,” Yves Carcelle, Vuitton’s president and chief executive officer, mused during an exclusive interview to discuss the venture. He noted that the repetitive design, with the LV initials interspersed with stylized flowers, first debuted on trunks in 1896.

Carcelle took pains to portray Vuitton’s latest artistic collaboration as a cultural initiative that will help animate its boutiques and burnish the brand, rather than a calculated effort to boost revenues. “It’s not to put products on shelves,” he stressed.

Vuitton and Jacobs, its artistic director, are famous for occasional tie-ups with contemporary artists, igniting the practice in 2001 when Jacobs asked his old New York cohort Stephen Sprouse to spray handbags with his signature graffiti.

Vuitton’s artistic collaborations reached a zenith in 2003 when Takashi Murakami rendered Vuitton’s famous monogram in a rainbow of colors, plus a sprinkling of cartoonish eyeballs. At the time, market sources estimated the blockbuster collaboration yielded sales approaching $350 million that year, roughly 10 percent of Vuitton’s total revenues.

Today, the multicolor monogram, on black or white backgrounds, has entered the lexicon of permanent products chez Vuitton.

In 2007, Vuitton tapped American artist Richard Prince, who splashed his quirky “joke paintings” over leather goods and deconstructed the monogram. Two years later, at the height of the financial crisis, Vuitton reprised Sprouse’s rose motif, adding some levity to the retail scene.

Carcelle insisted the brand has no timetable to mount such collaborations. “It’s really not at all the philosophy,” he said, sitting in his office on the fifth floor of Vuitton headquarters, with a breathtaking view of the Seine River and its bridges.

Instead, he explained that they dovetail from a cultural flash point.

A series of Kusama exhibitions at high-profile museums in 2012 — first the Pompidou Center in Paris earlier this year, now the Tate Modern in London and soon the Whitney — offered a perfect moment for Jacobs to work with one of his favorite artists, whose diverse output spans paintings, soft sculptures, installations and performance works.

“It’s really charming. It has the essence of the spirit of her work,” Jacobs said of the collaboration, describing Vuitton’s monogram and Kusama’s spots as “both timeless and endless.”

Known for her exacting approach — each dot in her “infinity” paintings is painstakingly placed — Kusama was “very involved personally in every detail of the product,” Carcelle said.

Jacobs, too, is known for his love of circular motifs, having named his latest signature fragrance Dot, in a ladybuglike bottle.

Besides spots, does Vuitton share values in common with Kusama? “She traveled through cultures and time,” Carcelle beamed, referring to her time in New York in the Sixties and her 70 years of creation. Now 82 and living in a hospital for the mentally ill, Kusama has been painting since age 10 and applied dots to canvases, tree trunks, entire rooms and even people.

Carcelle said the Kusama products would be available in limited quantities. “We prefer for them to become collector’s items. Years after, people are so excited to have these bags,” he said.

Yet Vuitton is putting considerable marketing muscle behind the initiative.

Next month, it plans to introduce an iPhone app dedicated to the artist and her quirky vision of the world. No products are featured. Rather, users can take pictures and customize them with Kusama motifs such as dots. The free app — available in English and Japanese — also allows users to share their creations via social media platforms, or submit them to a dedicated site at louisvuittonkusama.com.

Carcelle said Vuitton is also plotting pop-up shops with select department and specialty stores. He declined to name them, but hinted they would mount installations that rival what’s in the museum displays. The Tate display, for example, culminates with a mirrored room in which hundreds of colored lights are strung and reflected ad infinitum.

The executive also withheld details about the windows, but promised they would shock, as Vuitton did in 2006 when it asked Danish artist Olafur Eliasson to create light-based works for its holiday displays.

“It had a big impact. It was the first time that at Christmas that we had no product in the window,” Carcelle said. “It shows that if you sell a very interesting story, people will come to see it.”