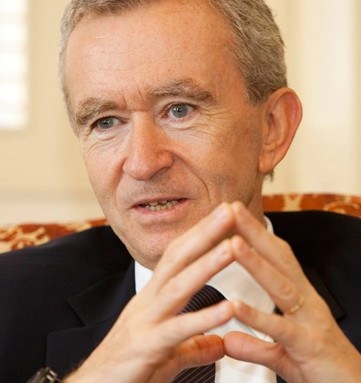 Arnault was explaining the reason Louis Vuitton was participating in the city’s annual Le French May arts festival. He said the decision was “both simple and logical” given Hong Kong’s position as the gateway for an ever-more powerful region. To illustrate the point, Vuitton will open its 28th store in Mainland China this week, in Wuxi.

Arnault and other members of tout Paris arrived here last week for the opening of “Louis Vuitton: A Passion for Creation,” an exhibition at the Hong Kong Museum of Art. The show, which features contemporary artworks from the permanent collection of the Fondation Louis Vuitton pour la Création as well as works by artists who have collaborated with designer Marc Jacobs, is the first and only exhibit of its kind in the world.

“We were traveling in China for a few days and you can still see a lot of dynamism and optimism and I was in the U.S. last week and it’s a completely different picture,” said Arnault. “It’s why we’re happy to be here today. There is enthusiasm.”

While Arnault said he preferred discussing art to talking business during his visit to Hong Kong, he acknowledged the two were connected. “Business is paying for art, so we have to compromise,” he said, going on to note, “Louis Vuitton especially is doing well. We are growing. It’s not the same everywhere, but in Asia and China in particular demand for the products is still growing.”

While stores around the world struggle with inventory and markdowns, Arnault insists on taking a long-term view of the financial crisis. “You know, through the different crises I went through in the last 20 years, what I have seen is that each time we gain market share. It’s not easy. Some have been quite difficult and this might be the strongest, but when the crisis is over, we will be strong and we will have gained market share,” said Arnault.

Expanding on the subject, he noted LVMH is one of the few companies listed on the CAC 40 still hiring employees and growing. “It’s possible to grow, to hire, to build instead of going to the government for help,” he said.

Yves Carcelle, chairman and chief executive officer of Louis Vuitton, acknowledged other retailers might be wondering about the secrets to the brand’s success. “There is a recession, but it doesn’t hurt everyone in the same way. So people are questioning, ‘Why is Vuitton growing in double digits when the rest of the world is struggling?’” The answer, Carcelle said, lies in the quality of the product, the service at the stores and complete control of distribution. “We have no franchises. No one else distributes Vuitton, so we maintain the quality. We never discount, never have a sale. These things are image-killing, brand-killing,” said Carcelle.

The economic climate is also providing real estate opportunities, as landlords are showing flexibility. Still, Carcelle said, the company is not persuaded by bargains. “It’s not because you find a good deal that you find a good second location. In luxury, you have to find the best place, but it is a good moment to negotiate,” said Carcelle.

Carcelle added he never relies on formulae for conducting business, especially when it comes to collaborating with artists. “I don’t believe in recipes. I don’t think that because one thing is successful, all of its kind will be successful. And when you work with artists, you get surprises,” he said.

Jacobs, who attended the exhibition’s opening alongside artist-collaborators Takashi Murakami and Richard Prince, said the company has always been open to such projects, even if they underestimated their commercial potential at the beginning. “I think the first one was Stephen Sprouse….They were receptive, but I don’t think they were so serious about manufacturing the products until they saw the reaction of the press,” said Jacobs, who recalled counterfeit versions of the Graffiti bags reached the streets before the company had manufactured any of the genuine pieces.

Jacobs also dismissed criticism that such collaborations demean either the artist or fashion. “I think that’s really stupid. It’s such an easy criticism to say this is not what art should be or this is not what fashion should be. That’s putting people in a box and it seems old-fashioned and archaic to me,” he said.

Arnault, too, believes critics of the ties between art and commerce should reconsider their way of thinking. “No enterprises can be successful if they are not profitable. We use designers and artists for success in what we do, so this [exhibit] is a way of giving back,” he said.