The new Louis Vuitton Maison embraces the city of London with full-on joie. 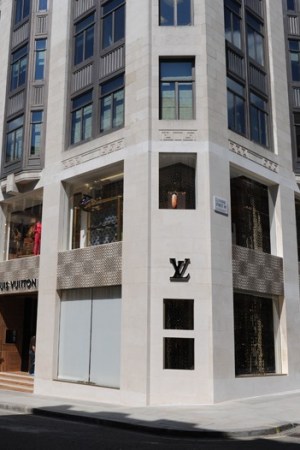 The store, which officially opens Friday, is an unapologetic shrine to luxury — and gadgetry — with gold leafing on wooden fixtures; hand-carved marble logos set into the shiny floors; display cases and wall frames that whizz back and forth like electric toys, and an LED staircase that lights up in response to footsteps.

At 17,000 square feet, the flagship is the second-largest Louis Vuitton store after the Champs-Elysées unit. Vuitton is calling the store its “most luxurious maison” ever, with 17 distinct zones carrying the brand’s full product offer, ranging from crocodile-covered caviar sets and drink cabinets, to the Pop Art-y Cosmic Blossom collection of flip-flops, bags and scarves.

To mark the opening, the store has an exclusive collection of scarves using prints created by the late Stephen Sprouse.

The unit, three years in the making, is double the size of the former Louis Vuitton store. It comprises the old store and the former Donna Karan flagship next door. The two facades have remained the same, and the stores — one of which was built in the Thirties and the other during the Edwardian era — have been seamlessly fused.

Yves Carcelle, Louis Vuitton’s chairman and chief executive officer, said he was most excited about the vast amount of space. “I think the volume is interesting: The store was on two levels, and now it’s on three levels — four, in fact, if you include the apartment upstairs. There is more room dedicated to every category of the brand,” he said.

Although Carcelle would not reveal first-year estimates for the store, industry sources said the company is paying between 2.5 million and 4 million pounds, or $3.6 million and $5.8 million, in annual rent.

Carcelle added the company wanted to play up London’s position as a capital for contemporary art. “So we pushed Peter [Marino, the architect] to play more with the art within the store,” Carcelle said, adding the unit is inspired by the spirit of “a collector,” who spends a lifetime ferreting out rare and precious items.

The art lends the store — a decidedly polished, precious affair — an irreverent, ironic air. At the entrance is Michael Landy’s “Credit Card Destroying Machine,” a moving sculpture made from junkyardlike cast-offs such as old toys, propellers, chains and an armadillo skull the artist found on eBay. Landy said his work was inspired by the Swiss artist Jean Tinguely’s sculptural machines made from scrap yard bits.

On the other side of the ground floor, there’s a “bag bar” with leather stools where luxury lovers can sit and feast their eyes on moving displays of bags. When they’re finished, they can spin around and watch a display of printed silk scarves in frames zip up and down on the opposite wall.

The LED-lit staircase with its moving patches of blue light leads downstairs to the men’s wear area — another luxurious space with leather and ponyskin club chairs and suede walls in the dressing rooms — and up to the first floor, which is dedicated to women’s wear and accessories.

The British stylist Katie Grand has dressed mannequins — who have handbags for heads — in a mix of the brand’s past and present ready-to-wear.

A “librairie” has also been installed on the first floor, with a focus on 20th-century British art books and a clutch of limited edition tomes created specially for the store by artists including Anish Kapoor, Mark Quinn, Gary Hume and Ofili.

Meanwhile, the second floor has been transformed into a private “VIP apartment,” a by-invitation-only space for top clients, which is adorned with artwork on loan from the Louis Vuitton Foundation. There’s a Basquiat at the reception, art by Gilbert and George, photographs by Richard Prince, and a Jeff Koons mirror on the walls. The apartment, which is divided into a series of luxurious sitting rooms and dressing rooms, is served by a full-time butler. Carcelle said the VIP floor is a must-have for Bond Street.

“In London, we have the local clientele, but we tend to focus on the wealthy clientele from abroad. Many of our stores have a VIP room, and here we extended the notion to an apartment. This is where people will have privacy and calm — it will feel as if you are in an art collector’s apartment,” said Carcelle.