The line returns as a capsule dress collection in an exclusive with Neiman Marcus. 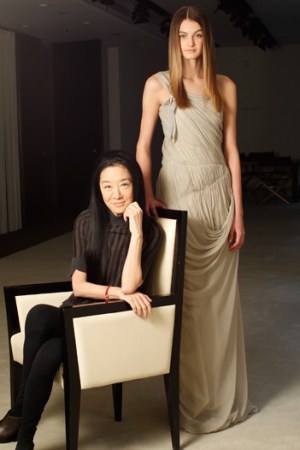 NEW YORK — Vera Wang has rediscovered the root of Lavender.

After more than a year on hiatus, the designer has relaunched her Lavender label, this time as a capsule evening dress collection — more in the spirit of how the line first started in 2005. Unlike that initial run, which rapidly expanded at retail but shuttered during the economic meltdown, the new Lavender launched exclusively at Neiman Marcus last month.

“This is very focused,” Wang said, sitting in her West 39th Street showroom at a preview of the pre-fall lineup. “There will be dresses that are evening-ish and some that will go into full evening. The definition of evening is so open now.

“I have two test-marketers in my house, living with me,” she added, referring to her daughters Cecilia, 21, and Josephine, 18. “They are very good for me to bounce ideas off of. They make sure they let me know what’s good, and what isn’t good, and why I am doing this, and I think that’s very real.”

Wang first launched Lavender for spring 2005 as a line of cocktail and evening dresses for dress departments, but repositioned it for spring 2007 as a contemporary business replete with separates. Lavender had wholesale sales of about $18 million and was on its way to reach $27 million when the economy crashed. At the time, sources said that a part of the problem was that Lavender, positioned at the upper end of contemporary, was too expensive for the category, and had grown to include too many stockkeeping units — at a time when shoppers were staying away from stores. Major retailers dropped the business, and Wang put it on hiatus, though the shoe license continued to operate.

“We closed Lavender because it got a little out of control,” explained Mario Grauso, president of the Vera Wang Group, who wasn’t with the company at the time. “The assortment was too large, and I think we were trying to be too many things. We relaunched it exclusively in Neiman Marcus as a specialty dress collection in the way that it started, but it’s very pointed and very specific.”

The new capsule dress line is priced from $395 to $595 at suggested retail (by contrast Lavender’s previous incarnation carried retail price points from about $200 to $800). Neiman Marcus is selling it in dress departments in 26 doors as well as at neimanmarcus.com, with 16 sku’s around 10 annual deliveries. “The consumer wants to see newness constantly,” said Wang, who, on multiple occasions, described the dresses as something her daughters would don when they hit the town, whether it’s New York or on vacation in Barbados. That’s not to say Wang didn’t infuse the line with some of her own artsy aesthetic. It includes a strapless organza dress with a jet-stone embellished sash for $395; a one-shoulder crinkle chiffon hand-ruched, draped gown with a crystal bow detail for $595, and a cotton voile multitiered pleated bustier dress for $450. Wang said she wanted the dresses to be “charming, flirty, sexy and youthful.”

“I love the fact that it’s young,” she said. “I think there is a teenager aspect to me. It doesn’t mean I can’t be sophisticated but I have a very young thought process, and I feel very comfortable in this language.”

As for the timing of the relaunch, Grauso said the company now has the right infrastructure to support the line. “We have a team we feel good about, we have the ability now to go in and manage the business,” he said. That team includes creative director Michelle Kessler Sanders, who will join the company this month from T: The New York Times Style Magazine, and Todd Bernstein, senior vice president of sales, who joined Wang from Theory last October.

Grauso declined to give sales projections. “I would imagine we would increase distribution at some point,” Grauso said. “Neiman Marcus has been an amazing partner for us, and we are very happy doing this with them.”

Wang said she would like to add handbags next but has no plans to create the soup-to-nuts sportswear mix. If she did another contemporary sportswear collection, “I wouldn’t call it Lavender,” she said.