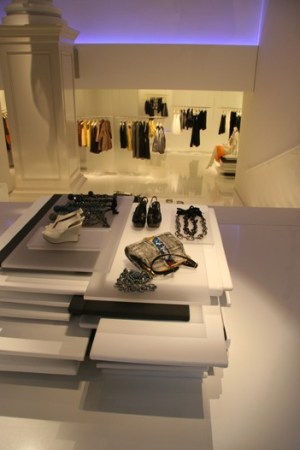 Designed by Gabellini Sheppard Associates LLP, the two-level, all-white boutique has a bevy of interchangeable features made from varying textures — sliding partitions, shell-like hang bars, translucent shelving, scrims, neoprene-covered furniture and stackable mini gym mats — that make for a dramatic space of extreme proportions, which are indicative of Wang’s rtw and how she works in her design studio.

Shoppers will be free to roam Friday in the airy 2,500-square-foot space at 158 Mercer St., the first of its kind to showcase the designer’s rtw and Lavender collections, including shoes, jewelry, sunglasses, handbags and her brand-new Look fragrance. Jacket-and-skirt combos, as well as little short dresses and jewelry should be key sellers in the store, she said.

“I have waited a long time for this,” Wang said. “This was not a sudden decision. I opened my last store in 1989. I have waited 19 years for this, so it means a lot to me, not just from a business point of view but from an emotional point of view. I found this space and held onto it for two years because I couldn’t decide on an architect and I wasn’t about to rush.”

Shaky as the economy is, Wang wasn’t about to wait any longer for a flagship. “No one would say that they’re not nervous,” she said. “One would have to be in a cave not to realize that there is going to be a serious recast of the landscape with what’s going on at all levels. It’s a challenging time to be a designer on any level at any price point. There is some great stuff out there. You have to keep your wits about you. It’s not only about you — it’s about your client. As an owner and a designer, I have very different parameters I have to deal with, and it’s a far more expanded sense of responsibility…. We felt this was something we really needed and wanted to do.”

With sweeping street-front windows and 40-foot ceilings, the store is splashed with natural and artificial light that can simulate twilight, daylight and moonlight to create varying moods. Fitting rooms have frosted translucent glass doors with sensory light boxes that can change colors. The designer is toying with the idea of having shoppers sign their names on Plexiglas panels in the store, or having staffers hang wallpaper or spray graffiti. Of course, any of those installations would only be temporary. Wang even had a hand in the etchings on the sliding partitions, which were taken from patterns used in her clothing.

Just as the lighting, furniture and displays will continually be rearranged, there will also be additions. Branchlike hang bars will be used in the store’s next incarnation. Next season, Japanese car-seat material that “looks like angel hair pasta but is the chicest thing ever seen” will be incorporated into the store’s design, said architect Michael Gabellini.

“The idea is the store is not precious…. It’s a gym, it’s a project space,” he said.

A set of wide-set stairs in the center of the store can serve as seating for fashion shows, poetry readings or any other special presentation. There are also two walls appropriate for film or video projections, which Wang plans to put to good use. During a walk-through Tuesday, one wall caught the shadow of a mannequin suspended from the ceiling. Artistic as the aerial display is, it also reveals the intricacy of Wang’s designs, such as a laser-cut underskirt that might not be noticed if it were hanging from a hanger.

Even the building’s original columns, which meld surprisingly well with the store’s modern architecture, reflect her style.

Located in the New Museum Building, the store’s design had to pass muster with tenants before it got the green light. “There are very edgy, cool New Yorkers here — Marci Klein lives upstairs. Everyone in this building are major stylistas — Fabien Baron, André Balazs,” Wang said. “It was a rough board.”

Now that the Mercer Street store is ready, Wang needs to wrap up her pre-fall collection and decide how to show her fall collection in February. “Certain leaders of our industry are spearheading less shows more and more,” she said. “Our personal choice is still [to be determined]. It also depends on how the clothes are looking, too.”

Next year Wang plans to open two stores on Melrose Avenue in Los Angeles — one for rtw and bridal, and the other for Lavender. Her Madison Avenue bridal boutique will also get a facelift. Retail direction is one of the areas overseen by Constance Darrow, who joined the company as president of creative direction this spring. Her responsibilities have not changed since Susan Sokol resigned as president of Vera Wang apparel last month. Sokol will not be replaced, with Wang, Darrow and the company’s president of licensing, Laura Lee Miller, continuing to work together as is, Wang said.

For now, Wang is reveling in her downtown space. “I finally have a place to put my clothes. It’s my own store.”