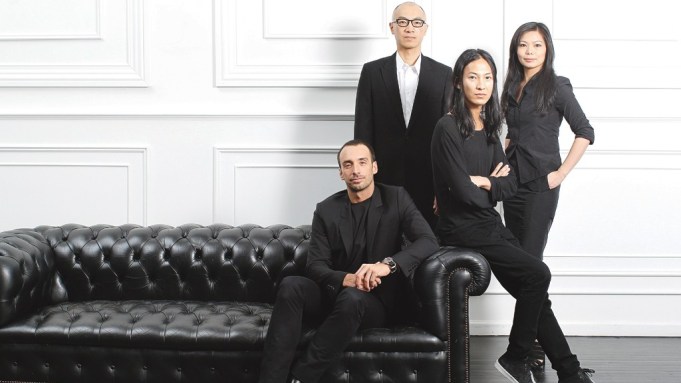 That’s the route of the Alexander Wang retail express, set to gather major speed beginning next month with the opening of the designer’s Beijing flagship, to be followed in short order by several more outposts. By the end of the year, the designer will have 15 of his own stores, all but one in Asia. Wang’s first and only other store to date opened on Grand Street in New York last February.

Though not surprising given fashion’s obsession with China and the designer’s deep personal ties to the country, Wang’s approach breaks dramatically from the traditional retail development of older Western brands, which have typically opened first in their home cities, whether New York, Paris or London, and next, if not in another domestic city, then elsewhere in the West before expanding more globally.

By ignoring that once-standard progression, Wang is telegraphing an overall business approach that parallels his fashion: energetic, bold and totally of the moment. In the bigger picture, his method suggests a core shift in the mind-set of designers coming of professional age now: They’re more likely to think East first and then West.

With Wang’s ready-to-wear, which is divided into three spheres — Collection, Core and T — as hot as can be, and his accessories expanding rapidly, retail development is now a major focus of the brand. In a recent conversation, the designer and company president Rodrigo Bazan outlined the strategy.

After opening in New York, Wang and his executive team, which also includes Dennis and Aimie Wang (chief principal officer and chief executive officer, respectively, and the designer’s brother and sister-in-law), immediately started thinking about their next retail move. A second U.S. store was never on the radar. “I thought London sounds cool,” Wang says. (The brand’s largest international markets are Tokyo and London.) “But I wasn’t quite excited by that. Then I was like, ‘You know what? It should be China. I’m Chinese; it makes sense.”

But for Hong Kong, where the firm does significant business with Joyce and Lane Crawford, demand was high yet distribution low, a condition Bazan attributes to a dearth of appropriate multivendor opportunities: “There aren’t many other choices.”

On the personal side, it seems that mother knew best all along. Though raised primarily in the U.S., Wang spent much of his childhood in Shanghai. By the time he was an adolescent, his mother had moved there permanently, and he enrolled in an American boarding school. Over the years he’s traveled regularly to Shanghai, first to see his mother, and later, also for the business. “My mom was the first to tell me, 10, 15 years ago: ‘China, one day, is going to be the next fashion capital,’” he recalls. “At that time, I was like, ‘Mom, you’re just trying to get me to move here with you!’ But then, I saw the progression.”

The executive team agreed that China made perfect sense for a second store. Wang grows almost uncomfortable when asked if his lineage gives him an advantage in that market. “How do I answer that?” he muses. “In a way, I know there’s an audience that connects with me. How I identify that or what I pinpoint that to, whether it’s because of my background or because I connect with people of my generation in New York or London — that, I don’t know how to explain or quantify. But I do think that developing a business there, having the background and knowing how to speak the language, is definitely, yes, an advantage.”

Shanghai was the presumptive seat of Wang’s second flagship — until he piggybacked a scouting trip there with a visit to Beijing, his first visit in years, so a friend could see the city. He found it amazingly progressive. “Everything was going on in Beijing, whether it was in music or culinary or entertainment. We happened to be there together with Rodrigo and we saw this one location and it was open.”

The spot was in Sanlitun Village in the city’s Chaoyang District, a concept structured like a chic village, freestanding shops and restaurants accessible from the street, with residents including Balenciaga, Moncler, Versace, McQueen, Margiela, Lanvin, Marni, Balmain and I.T Beijing Market. “We were really impressed,” Bazan says. “I think it’s [more interesting] than anything else happening in retail projects, even in Western Europe and the U.S. This beautiful piece of land creating freestanding stores in 15,000-square-foot blocks — it’s perfect.”

The 4,000-square-foot store will house the full range of Wang products, including the women’s and men’s collections, T, Core, accessories and some site-specific items. Architect Joseph Dirand designed the space with a strong, sculptural look, dominated by a marble staircase between one bronze and one mirrored wall. Throughout, the marble patterning is intended to evoke a Rorschach test, while asphalt flooring contrasts with the high-polish surfaces elsewhere. Seating is a vintage de Sede sofa. Assuming the accuracy of the computer-generated rendering, it’s quite different — and more imposing — than the New York store. “I never want store clones,” Wang says. “I like it when you go to different stores and have a slightly different experience. The fur hammock is something iconic to our New York store, and I don’t want to replicate it in every store; it shouldn’t be a commodity.”

The Beijing flagship is on target to open next month with a major event in April, attended by Wang. While details are not yet set, the intention for the party is to capture the feel of Wang’s raucous, ultracool collection after parties.

Fast on the heels of Beijing, various outposts will open in Shanghai, Tokyo, Seoul, Bangkok and Singapore. Shanghai will be home to two permanent freestanding stores, each in a luxury shopping area. A second tier to the retail strategy: shop-in-shops. Set for Japan and Korea, they will range from 650 to 1,000 square feet and, according to Bazan, be positioned in “outstanding environments in the best department stores with amazing adjacencies.”

With a healthy exposure in Japan already, a freestanding Tokyo store seemed unnecessary at the moment. Shop-in-shops provide “a perfect incubator phase,” according to Bazan. In Tokyo, a Wang shop opened in Isetan Shinjuku on Feb. 4, with Dover Street Market Ginza slated for March 12; two others are set for other unnamed Japanese cities. The brand enlisted the deeply entrenched retail expert Club 21 as its partner for Japan as well as for Singapore and Thailand, where a 1,400-square-foot shop-in-shop will open in Club 21 in Bangkok’s Erawan Shopping Mall.

Typically, through such expansion, success has a great deal to do with finding the right partners. Though Korea is “a fantastic luxury market,” Bazan maintains that many stores there “don’t have traffic — they don’t make any money.” The key relationship there is with the retailer Shinsegae. Wang’s first shop-in-shop opened last year in Shinsegae Main; others are slated for the Shinsegae Gangnam, the Galleria and, by the end of the year, Hyundai Coex.

At one point, a significant element of the strategy centered on pop-up stores with Club 21 in malls in Singapore and Bangkok, and with Joyce in Hong Kong. Even before any one has opened, all three are looking increasingly like permanent stores.

Whether to open at all in Hong Kong was originally a question due to the thriving business at Joyce and Lane Crawford. But after “fantastic” conversations with Lane Crawford Joyce Group chairman and ceo Jennifer Woo, a partnership was forged for what was supposed to be a pop-up store in Kowloon. That has morphed into a freestanding 1,700-square-footer that will be celebrated with an opening party in April, followed by a minimum 18-month run almost certain to turn permanent. “We want clients to tell us,” Bazan says. “If we do amazingly well in the next 18 months.…”

The notion that “the customer will let us know” resonates deeply. Since opening in New York, some assumptions have been confirmed, some surprises uncovered. The store has affirmed Wang’s belief in his brand’s varied customer base, and that many are willing to spend on a pricy, special item. Previously, he explains, “Some stores might say, ‘This is what your customers are going to spend and that’s the most they’re going to spend.’”

As for discovery, requests revealed significant demand for greater variety in men’s accessories. “I was like, really?” Wang still sounds surprised. “Great, because we’re already working on it, but it’s interesting. There’s something with the name that resonates in that market.”

As brick-and-mortar develops, so will e-commerce. It launched two years ago in the U.S. only, and will be introduced across Asia this month. “We expect it to be our largest international store,” Bazan says. Europe will follow at some point, but no one’s rushing; the need to get the infrastructure right trumps the desire for speed. “There’s nothing worse,” Bazan offers, “than [a customer saying], ‘I’ll order’ and it takes two weeks to get something, or to exchange [is problematic]. You need to know how to deal with that.” The Wang delivery windows: within 24 hours in the U.S.; between 24 and 48 hours across Asia. As for m-commerce, no launch date yet. When it happens, Asia will likely be first, as traffic research shows the importance of mobile device activity in Asian markets.

While retail is a primary focus right now, it’s not the only news. The company is about to open a sales office in Paris and has added a “lifestyle” range of home accessories.

Of course, much of a young brand’s growth lies beyond the quantifiable areas. “I’ve matured, and that has definitely affected my aesthetic,” Wang says. “We always joke that everyone’s always like, ‘Oh it’s downtown New York!’ and ‘It’s models off-duty!’ I was a stupid 21-year-old when I said that. I didn’t know how to talk to the press. I’d mention something like that, and they’d blow it up to big, crazy extremes. In a certain way, it helped us define a look to a certain audience.

“At the same time,” he continues, “I think in knowledge, we grow. We’re much more of a global company. We have to fight those stereotypes in a way, because they limit you and pigeonhole you into a small corner of people’s conceptions. But at the end of the day, it’s the work that speaks for itself.” From Grand Street to Ginza.