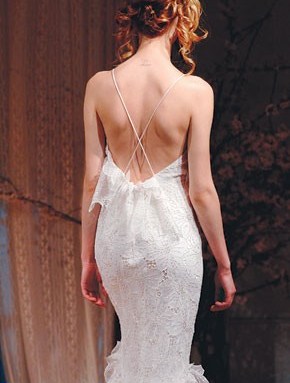 Counting on weddings to continue to take place regardless of the economy, bridal designers and retailers expect lighter-weight dresses and body-skimming silhouettes to appeal to their customers in the months ahead.

For the most part, everyone from Oscar de la Renta to J. Crew staged runway shows or presentations during bridal week in New York last week, but this time around, many of them showed a variety of lengths and styles instead of just the tried-and-true formal wedding gown. With many brides still buying two dresses for their big day or continuing to jet off for destination weddings, designers and bridal manufacturers made sure to serve up plenty of options.

Carolina Herrera went off-site with more informal modeling at the Plaza Hotel. While waiters passed cappuccinos and light breakfast fare, guests stood in a circle chatting as the models passed by. Herrera said she decided to try a more low-key affair after watching videotapes of previous shows and noticing that most guests chatted throughout. “I said, ‘Why can’t we do it so that everybody talks to each other, and at the same time, they are looking at the collection?'” she said, glancing around the room. “And everyone is so happy.”

Saks Fifth Avenue’s Michael Fink and Kleinfeld co-owner Mara Urshel were among the guests who nodded approvingly at the collection, which spanned the history of fashion with pieces inspired by the 18th century, Twenties, modern day and a little bit of everything.

“This is very good for brides. They can choose what they want to wear,” Herrera said afterward. “I loved the idea of having different periods in fashion.”

Gilles Mendel opted for private appointments to unveil his first bridal collection under the J.Mendel label. The designer has been quietly designing wedding dresses for select clients for the past few years. More than anything, he wanted to create dresses that are ethereal and lightweight to put brides at ease. Each style requires three to six months of lead time due to intricate details such as hand-pleated silk mousseline and embroidery under the dress’ skirt. The wedding dresses are an extension of his ready-to-wear collection, he said. A white lace mermaid dress with cap sleeves and a pleated chiffon underskirt and a strapless gown with a bolero are among the styles. “They are supersexy but they are not revealing anything,” the designer said.

The collection will be sold by appointment only at J.Mendel stores in the U.S., as well as through Bergdorf Goodman. Retail prices will range from $7,500 to $30,000.

In addition to staging a show at the Warwick Hotel and presenting her collection to buyers, Lela Rose faced an onslaught of media requests last week after news broke that she has designed dresses for the attendants at Jenna Bush’s upcoming wedding. But the affable designer, whose family has been friendly with the Bushes for years, was unruffled by all the attention. That said, there is no denying the publicity should boost interest.

“It’s great for us in terms of enabling our wedding collection to reach a different audience,” said Rose. “This will help us be recognized more in the wedding area even though we’re not doing Jenna’s wedding dress, of course.”

Beyond the First Daughter’s nuptials, Rose has established herself in the bridal business by launching her first ad campaign and focusing on nontraditional fabrics and details — an anomaly in the industry. Interestingly, the designer drew inspiration from Ayn Rand’s 1957 novel “Atlas Shrugged.”

“The impact that book had on me — it was such an inspiration to challenge the norm and challenge tradition,” she said. “I don’t like the idea of having a bride look as though she opened up a box and put on a shiny white dress. That’s an unrealistic perspective of what a wedding is. It’s about two people making a life together. You are who you are based on the people who came before you.”

Rose’s dresses tend to have a hint of nostalgia even though they are made from unusual fabrics such as laundered silk satin or Chantilly lace backed in voile. “We’re at an interesting moment now. The stores got it all initially and now the brides are getting it,” Rose said.

Last week Priscilla of Boston introduced stores to its fifth and newest collection, Reverie by Melissa Sweet. By having a portfolio of brands at different price points, the company aims to attract a wide range of shoppers, which is advantageous in these uncertain economic times, according to Gary Schwartz, president of the Priscilla of Boston bridal group.

The new collection consists of dresses in varying lengths and fabrics such as lace, chiffon and crepe de chine. Wholesale prices range from $800 to $1,300 which makes the label the opening price point for the bridal group. The decision to launch Reverie by Melissa Sweet was based in part on the popularity of what used to be its opening-price-point Vineyard collection, which was launched last year. In addition, the company makes its high-end Platinum for Priscilla of Boston, Melissa Sweet and Us Angels.

Another label with appealing price points is LaRichi, which wholesales from $900 to $1,400 and launched last year. A company spokeswoman said, “Overall traffic in the bridal industry has been slow, most likely due to economic pressures. In response, stores have expanded their market base to include evening gowns. Custom-made and couture bridal gowns are still in high demand as well as generating exclusive collections with retail stores. Brides are looking for reasonably priced custom-made designs.”

Just as brides want as many options as possible, they also want as much information as possible. Given that, Brides.com had its editors blog from bridal shows about the collections and trends. Going forward, the “Bridal Bits” blog will be updated several times each weekday touching upon wedding news such as celebrity engagements and etiquette questions. More than 1.2 million unique users visit the site every month, according to a Brides.com spokeswoman.

Kleinfeld’s Urshel said, “Many of the collections were playing it a little safe probably because business conditions have been slightly disappointing. Everyone was complaining that it was a quiet market. Part of it was due to the canceled [American Airlines] flights, but mostly because business has not been good and stores don’t need a lot of new merchandise.”

However safe some of the styles were, they were also saleable and that should bode well for Kleinfeld, which has seen a double-digit gain compared with last year, she said. “There wasn’t a lot to be talking about fashionwise, but sometimes those are the best seasons.”

Lightweight dresses and convertible styles, especially those from Domo Adami, should help push sales at Kleinfeld, which carries more than 85 labels. Urshel praised Carolina Herrera, Amsale, Anne Barge and Badgley Mischka for their collections. “There was a lot to bite into to have a good season,” she said.

Carine Balabi, owner of Carine’s Bridal Atelier in Washington, gave high marks to Monique Lhuillier, as well as Carolina Herrera for her “amazing” presentation at the Plaza Hotel, which felt like “My Fair Lady.” Angel Sanchez impressed Balabi for returning to architectural-inspired designs instead of the classic ones he tried a few seasons back.

Balabi also liked the bustles that were shown by Herrera and Peter Langner in his new couture collection. High bustles where the train was attached to the back of a dress but no longer on the waist also appealed to her. Reem Acra and Junko Yoshioka each offered versions.

“I don’t really feel things are slowing down. But a lot more brides are thinking harder about buying dresses instead of making quick decisions, because of pricing and everything else that is going on with the economy,” Balabi said, adding that the typical bride will now take eight weeks to decide about a purchase compared with the two-week window that was the norm a year ago.

Yolanda Cellucci, owner of Yolanda’s in Waltham, Mass., said her customers are looking for body-conscious dresses with low backs and high slits. They are gravitating toward mermaid, trumpet and slinky dresses, and they are showing more skin, she said. “They’re looking for dresses the girls on ‘Sex and the City’ might wear,” she said.

Cellucci praised Lhuillier, who is “always my favorite,” and Acra, who “was as creative as ever.” She also liked Paloma Blanca for “classic elegance” at an opening price point.

Kirstie Kelly’s Disney wedding dresses, inspired by such characters as Cinderella, Ariel of “The Little Mermaid” and others, are also popular with her shoppers — many of whom go to Disney World to be married at Cinderella’s castle, Epcot and other on-site locales. Last year one shopper said her vows on horseback wearing a fringed suede dress at Fort Wilderness. “Many of them have been dreaming of this type of wedding since they were three or four,” she said.

David’s Bridal, the 280-unit chain, has been courting women long before they even think about getting married. Through its national Glamour Girl contest, the retailer aims to get teenagers acquainted with its brand long before they are married. To rev up this year’s prom business, the company teamed up with “America’s Next Top Model” judge and photographer Nigel Barker, who shot the 2008 prom campaign and is serving as the spokesman. On Monday, he photographed the Glamour Girl winner in a David’s prom dress, after she had been glammed up by a hair and makeup team.