What to Watch: Jewelry Designers Bring Novel Forms and Materials

The jewelry market remains viable in a still challenging economy, with costume jewelry sales up 7 percent in the first half of 2009. 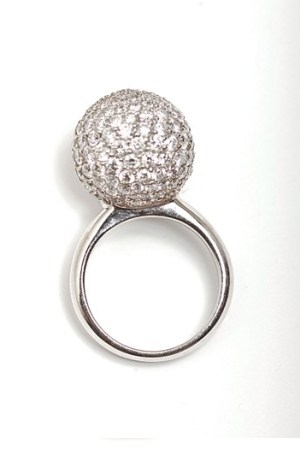 The jewelry market remains viable in a still challenging economy. Costume jewelry sales were up 7 percent in the first half of 2009 to $2.4 billion versus 2008, according to The NPD Group. Designers such as Roarke and Nancy Bacich, among others, continue to enter the market. Although fine jewelry didn’t fare quite as well — NPD reported a 16 percent decrease in fine jewelry sales from 2008’s first half to $7.6 billion in 2009 — brands including ZG Jewelry, Shannon Carney and Hoorsenbuhs are offering something new and believe the market will flourish again. Here’s a look at some up-and-comers for 2010.

If the initials in the debut line ZG Jewelry aren’t familiar, it’s because designer Zeta Graff wants to focus on design and quality, not her connection to the fabled Graff diamonds.

“Everybody knows that is my background, so I didn’t want to create something because of that,” said Graff, whose last name is a vestige of her former marriage to diamond heir and Graff managing director Francois Graff. “I am not keeping…huge diamonds. It is a smaller, everyday collection.”

The central design elements of ZG are miniature disco balls covered in white, gray and black diamonds, and pearls set in white or yellow gold and leather on bracelets, necklaces, rings and earrings. “I wanted to keep it monochromatic…and have things you wear all the time,” said Graff.

The ZG pieces, priced from $2,000 to $100,000 and available at Maxfield in Los Angeles, are intended to transition from day to night. She projects first-year sales of between $1 million and $2 million.

Also an actress and a model, Graff said she is considering securing friend and director Brett Ratner to shoot a playful print ad campaign for the line. It is likely to stick to the disco ball theme that she stressed would always remain a signature of ZG Jewelry.

When Laetitia Stanfield and Mignonne Gavigan met this year, they knew they had a certain fashionable chemistry.

Stanfield, then a buyer for Bergdorf Goodman, had the business know-how. Gavigan, a graduate of Parsons The New School for Design, offered the creative juice. In June, the duo launched Roarke NYC, an accessories line with a signature style of a crystal-embellished necklace-cum-scarf. The name is based on Howard Roark, the protagonist in Ayn Rand’s “The Fountainhead,” whom the founders admire for treading outside the norms of society while creating architecture that wowed the masses.

“The inspiration was taking something apart and making something new,” said Gavigan, Roarke’s co-president and creative director. “I used to work a lot with couture dresses and I view them as pieces of art, but I wanted to find a way to wear them every day.”

Roarke NYC’s necklaces come in double-layered chiffon, leather or cashmere, each with sophisticated hand-beading and crystal work from India. Other pieces include braided and fringed bracelets, chokers and headbands, as well as ties for men, all with Roarke’s signature beaded and mesh detailing. Prices range from $60 for a bracelet to $395 retail for the signature bib.

So far, Heidi Says in San Francisco carries the line, but Stanfield and Gavignon don’t have plans for a major retail rollout. Instead, they want to conduct trunk shows around the country and place the necklaces on bold-faced names such as Beyoncé Knowles, Mary-Louise Parker and Rachel Zoe, who have worn the necklaces already. They’re also targeting hotel boutiques in destinations such as Saint-Tropez, St. Barth’s and Mustique. The line is expected to do $120,000 at wholesale in its first year.

Shannon Carney’s studies in classical jewelry have led her to create anything but.

Carney, 29, a native of La Crosse, Wis., who studied jewelry design at Indiana University in Bloomington and later apprenticed in Florence, has launched her own collection and the main star isn’t diamonds, emeralds or rubies — it’s plastic.

Carney has developed a technique to dye, cut and mold high-quality resin to mimic gemstones in a novel way. Carney links her resin “cabochons” with 18-karat yellow gold rings to create bib necklaces, sautoirs and the like. Standout looks include a spherical cocktail ring, in which tiny resin pieces in reds, greens and purples are attached via an intricate network of nearly invisible hand-cut pieces of translucent nylon, for a “Lite-Brite” effect.

Pieces can take as long as a week to create and Carney does all of the plastic and metalwork from her Chicago atelier. Retail prices range from $190 to $5,900 for a larger necklace of undulating gold bubbles. She has recently begun selling to stores such as Tender in Birmingham, Mich.; Susan of Burlingame, Calif., and 10 Corso Como in Milan. Carney plans to open 10 additional doors in the U.S., as well as top-tier fashion and accessories boutiques in London, Paris, Tokyo and Dubai. Of the economic hardships of late, Carney said, “If [retailers] like the work, they’ll find a way to work with you.”

Coming from the world of lingerie design, Nancy Bacich’s approach to accessories is arguably softer than most. But that doesn’t keep the designer from toying with hard materials such as chain mail, her signature.

“When I started my own collection, I felt as though it had a lingerie touch,” said Bacich, a native New Yorker. “The way that I’m using the metal mesh is very drapy, so it has a very skinny, lacy look to it.”

Bacich is taking that same approach with her medieval-meets-feminine bag with costume jewelry for spring. The line is rife with fluid metal mesh necklaces, cuffs and earrings electroplated in gem colors and layered stones, and finished with a hand-crocheted edge for a delicate feel. The line starts at $36 and goes to $325 for a long necklace with stones. Ultimo in Chicago and Plaza Too, the accessories chain in the Northeast, have picked up the line.

Bacich is also collaborating with MAC Cosmetics on a special project and with handbag maker Anthony Luciano on some pieces. In the past, she has collaborated with houses such as Valentino and Charles Nolan.

“The luxury handbag business has been challenging,” said Bacich, of the impetus to launch jewelry. “But through this time of turmoil, it’s been a very creative time for me.”

“I wanted to learn the jewelry trade because it wasn’t a disposable, crash-and-burn type of trade,” he said. “I like when there’s intrinsic value. Some of the other stuff you can get into becomes worthless pretty quickly.”

Keith created Hoorsenbuhs’ signature tri-link, an update of the classic marine anchor chain link, to be a classic in the line. He started with rings that have multiple links and then played with incorporating the links into hoop earrings, necklaces and thin stackable rings, as well as larger rings with a single, elongated link called Phantoms.

Next up for Hoorsenbuhs are pieces centered on gold and diamonds flanked by Stradivarius violin-inspired arches. Also on its way is an evolution of the Phantom ring with a motif resembling the Roman numeral two. Hoorsenbuhs prices range mostly from $1,520 to $30,000.

“I would rather just come out with pieces that stand up to the test of time,” he said. “Everybody can identify with things that have classic lines.”

Jewelry enthusiasts are increasingly gravitating toward Keith’s approach. Hoorsenbuhs broke into Barneys New York last year, when the brand generated $430,000 in sales, and has already more than doubled last year’s sales total. Next year, it will enter Lane Crawford and Browns of London.

But don’t expect to be able to find Hoorsenbuhs everywhere soon. Kether Parker, brand liaison for Hoorsenbuhs, which is named after a Dutch trading ship that Keith’s ancestor toiled on, explained Hoorsenbuhs’ strategy is to keep its retail distribution tight. “We are not trying to have boutiques in every little town,” he said, adding that eventually, Hoorsenbuhs’ goal is to open its own stores.