When Barneys Met Proenza: A Perfect 10

To celebrate their 10-year anniversary, Barneys and Proenza have worked up a capsule collection, titled “Proenza Schouler: First Collection.” 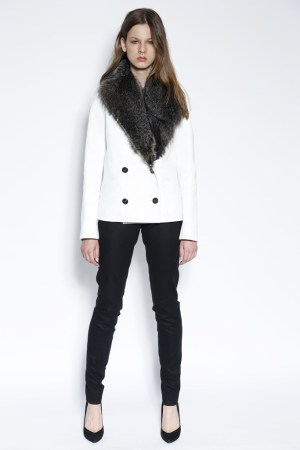 The story of Barneys New York and Proenza Schouler is something of a fashion storybook romance, its lore undoubtedly stoking the passions of design students the world over. Especially at Parsons The New School for Design, where Jack McCollough and Lazaro Hernandez were still students presenting their senior thesis collection when Barneys bought the whole thing off the student runway show, thus securing bragging rights to the discovery of the designers, who were named Womenswear Designer of the Year at the CFDA Awards Monday night, their fifth Trova. “We didn’t prepare at all,” said McCollough on the phone the next day. “Last year we went with a speech, and there’s nothing more depressing than going home at the end of the night with a speech in your pocket that you didn’t get to use.”

To celebrate their 10-year anniversary, Barneys and Proenza have worked up a capsule collection, titled “Proenza Schouler: First Collection,” of pieces from McCollough and Hernandez’s first runway show for fall 2003. (The thesis collection was actually 11 years ago — minor detail.) The 19-piece lineup will be available at Barneys’ Madison Avenue and Los Angeles stores starting Friday and includes a white cracked leather jacket with a raccoon fur collar; a suede trench and matching pants; a simple T and slouchy trousers and, perhaps the most memorable item from the show, a silver sequined bustier top that became one of their signatures for a few seasons running. Prices range from $850 to $5,650.

“They don’t look like they’re from 10 years ago, right?” asked McCollough. He was correct — the collection holds up to today’s standards, if it’s not what fashion followers would expect from Proenza in its current designs. “Our first collection almost reminded me of like one of our pre-collections now,” said McCollough, adding that some small adjustments and refits were required to take the looks to 2013. “We did all of the original patterns back then. We weren’t the best patternmakers, so they definitely needed some tweaking.”

Barneys is putting a lot of promotional muscle behind the project, dedicating all the Madison Avenue windows to a Proenza Schouler retrospective, which will be unveiled this weekend, and for the first time opening a dedicated private shopping site that allows select barneys.com customers to pre-shop Wednesday and Thursday, with a print and digital campaign as well. “We anticipate that it will sell out online fairly quickly,” said Daniella Vitale, Barneys’ chief operating officer and senior executive vice president.

The Proenza Schouler graduation-to-greatness story is well known to the industry, devout fashion fans and the label’s most loyal customers, but does the average Barneys shopper know and, more importantly, will history drive a sale? Vitale thinks so. “The storytelling is part of what we do and do well,” she said. “This resonates with our customers, and it is important that we differentiate ourselves with these compelling stories behind our brands.”