Karl Lagerfeld is almost as synonymous with Chanel as Coco Chanel herself at this point, but there was a time when the now legendary designer was nervously working on his first Chanel collection, Couture for fall 1983. This being the notoriously work-centric Lagerfeld, he was toiling simultaneously for Chloé and Fendi and “myriad other clients,” and told WWD’s then staffer Christopher Petkanas that he was “delighted” to be working 16 hours a day. Not much has changed on that front as the infamously productive designer still heads up multiple houses, including Fendi and his namesake line, but when he first joined Chanel, only part time initially, he wasn’t met with particularly open arms.

Petkanas alludes to a Cold War with a “smiling surface” between Chanel staffers and Lagerfeld’s implants, like his former assistant Hervé Leger, who was tapped to help design ready-to-wear, and former model Mercedes Robirosa, who was brought in to “jazz up” the house’s press office.

Lagerfeld made it through any tensions — and overcame his frustrations with the slow production pace of couture — and yanked Chanel into the Eighties with his first designs pulling inspiration from the Twenties and Thirties, while decidedly ignoring Chanel’s “comeback” era of the Fifties. But this was a risk, as was Lagerfeld’s decision to move away from the pastels and boxy suits the house had become more-or-less known for.

Lagerfeld knew Chanel needed to be pushed into modernity, and brought in many of his own people to get the job done, but he was also nothing if not respectful of the house’s legacy. He gently justified his changes, noting at the time: “Even if she never did it this way, it’s very Chanel, no?”

Not everyone agreed with him. At the time WWD wrote: Lagerfeld “committed too many Chanel Dont’s and not enough Do’s” in its review, lamenting “bulky” fabrics, pockets at the hip, back-buckling belts and even a lack of ironing. But French socialite Marie-Hélène de Rothschild was more generous, saying after the show that “No one could have done it on the first try. It will come.” More than 30 years later, it seems Lagerfeld indeed has Chanel figured out.

PARIS — The sign on the design studio’s door still reads “Mademoiselle — Prive,” but inside is a remarkably tanned, newly trim Karl Lagerfeld nervously admiring his careful rendition of the Chanel suit he will present in his first couture collection for the house on Tuesday, Jan. 25.

It was at Lagerfeld’s insistence that the ghostly reminder of Coco Chanel remains outside his newest part-time office, and he works deep into the night, hoping to live up to the hallowed name while keeping aloft his own reputation. For Chanel, and myriad other clients, he is working “16 hours a day and delighted to do it.”

Under Lagerfeld’s weighty and controversial baton, the Rue Cambon is humming with excitement — and tension that threatens to crack the smiling surface any second. The atmosphere in the salons and ateliers is charged with a sort of palpable “them against us” friction between the Chanel regulars and the Lagerfeld camp; when they pass each other on the famous winding staircase set against a wall of mirrors, they are nothing if not polite.

Lagerfeld is eager for the world to understand how he is dealing and coping with his newest, and probably heaviest, mantle. “A very static image has emerged based on Chanel’s last years,” he explains, hesitantly straightening five circles of faux pearls around a swan-neck mannequin, “so I’ve looked over her whole career and found something much more interesting.”

The designer says he drew inspiration for the collection from Chanel’s vital yet neglected work of the Twenties and Thirties, and sidestepped the fanfare of her Fifties comeback, when the hemline was lementably frozen just below the knee.

“She did hundreds of different lengths,” Lagerfeld says. He zeros in on one that is decidedly long; in the designer’s new Chanel lexicon, that means the top of the shin. “Suddenly, it looks normal, while that medium length makes the suits look like the Chanel copies in the shop windows on the Rue du Faubourg Saint Honore.”

Lagerfeld’s light wool suit jackets are courteously fitted and often cropped and angular or rounded, held with a single button and gently shaped over the bottom of the hips. Underneath are the Eighties features easily identified with Lagerfeld; the well-greased, self-described “fashion machine” — matching vests and shell blouses in crunchy white ottoman or heavy cotton pique. Riding carefully below is the slender skirt Lagerfeld has reinvented and dubbed “the windmill,” so called for the four deep slits that send panels of fabric moving.

Scarab-like clips — precise copies of Chanel accessories from the Thirties — made in Italy of gold, rhinestones and clear plastic are elegantly placed on the round necks of jackets and blouses. The ideal mannequin for the refined, very polished look will have pale skin, black hair and no bangs.

Lagerfeld is “not crazy for color in the haute couture or for the [pastel] Madame Pompadour-colored suits,” so he’s playing it cool and understated with navy, black, white and red, “so long as it doesn’t remind me of Spanish tourists. In the Twenties, Chanel was known as the queen of beige, but I’ll wait for winter to use it.” One of his evening versions of the suit, designed for theaters and restaurants, is in a black silver cloque and silver Lurex metallic yarn with a side-buttoned skirt. Here, too, Lagerfeld uses pique for the vest and blouse in what he says is an intentionally unconventional mix of fabrics.

The spring collection, he promises, will be “modern and chic-sexy, not Las Vegas-sexy, while the new proportion is longer and thinner. Even if she never did it this way,” he asks very optimistically, “it’s very Chanel, no?”

Heavily guarding Lagerfeld’s interests at the house are Mercedes Robirosa, the toothy ex-model brought in expressly to jazz up the press office; Hervé Leger and Eva Campocasso, former assistants of his, handpicked to design the Chanel ready-to-wear; and Paquito Sala, the suit maker he hired from Pierre Balmain when the couturier died last spring. Lagerfeld had had his eye on Sala since 1954, when the then 16-year-old German boy with an obsessive interest in clothes took his first job at Balmain. “I’m working like the Communist party,” Lagerfeld says, “bringing in my own people and placing them everywhere.”

But even with so many willing acolytes, all is not going as smoothly as Lagerfeld would like. For one thing, the pace is slow and halting. “I have to get used to the couture,” he admits. “They can’t make up the dresses as quickly as I want them to.” And every time the intricate Chanel machine breaks down and there is an organizational snafu, he swiftly points out, as he does at Chloé, that he is not responsible because this is not his house.

“I have no desk anywhere, it’s all in my mind,” Lagerfeld says. “I like to work only for big companies with big advertising power. I don’t like anything small.” Friends close to the designer say he is so overworked he is considering giving up one of his clients, possibly Alma, the Italian mass-market manufacturer.

Lagerfeld can afford to. Chanel is reportedly paying him $1 million a year plus $100,000 in dresses he can lavish on editors and friends like Ira von Furstenberg and Jacqueline Brynner. Andrée Putman probably isn’t quite right for the clothes, concedes Lagerfeld, whose Caraceni suits are fitting much better since he lost 22 pounds. The part-time office Lagerfeld keeps at Chanel was designed by Putman in a style similar to that of his Chloe digs.

Shuttling between paris Rome, where he works on Fendi collections, and Monte Carlo, where he is a resident, Lagerfeld has neither the time nor the appetite to venture out socially at night. “I’m into making public disappearances,” he says drolly, “so Hervé goes out for me and files a report.”

“If I only did Chanel it would be mediocre because I’d have to renounce my own personality,” Lagerfeld says, explaining the necessity for having his finger in so many pies. “These days I’m like a computer who’s plugged into the Chanel mode.” 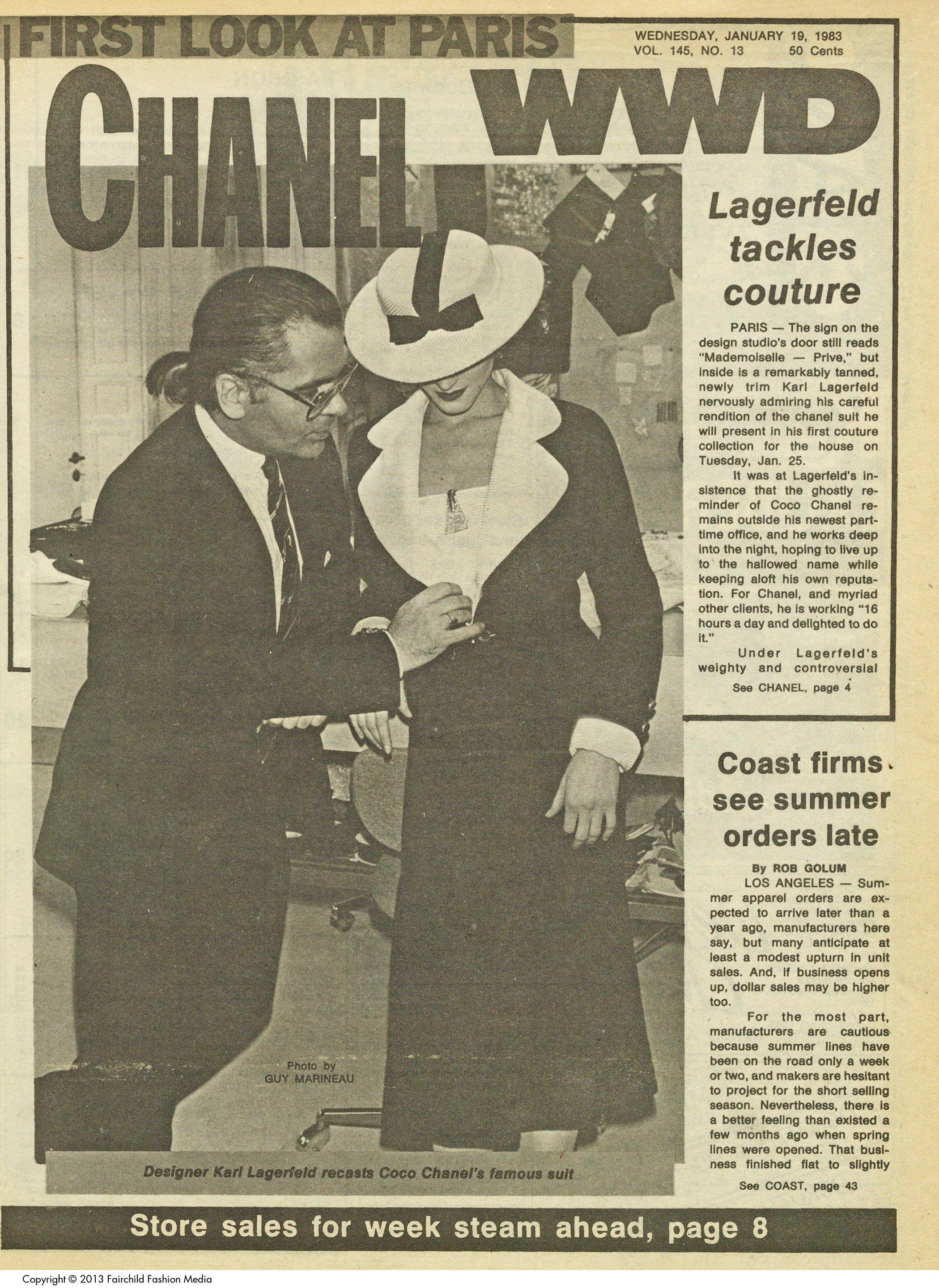 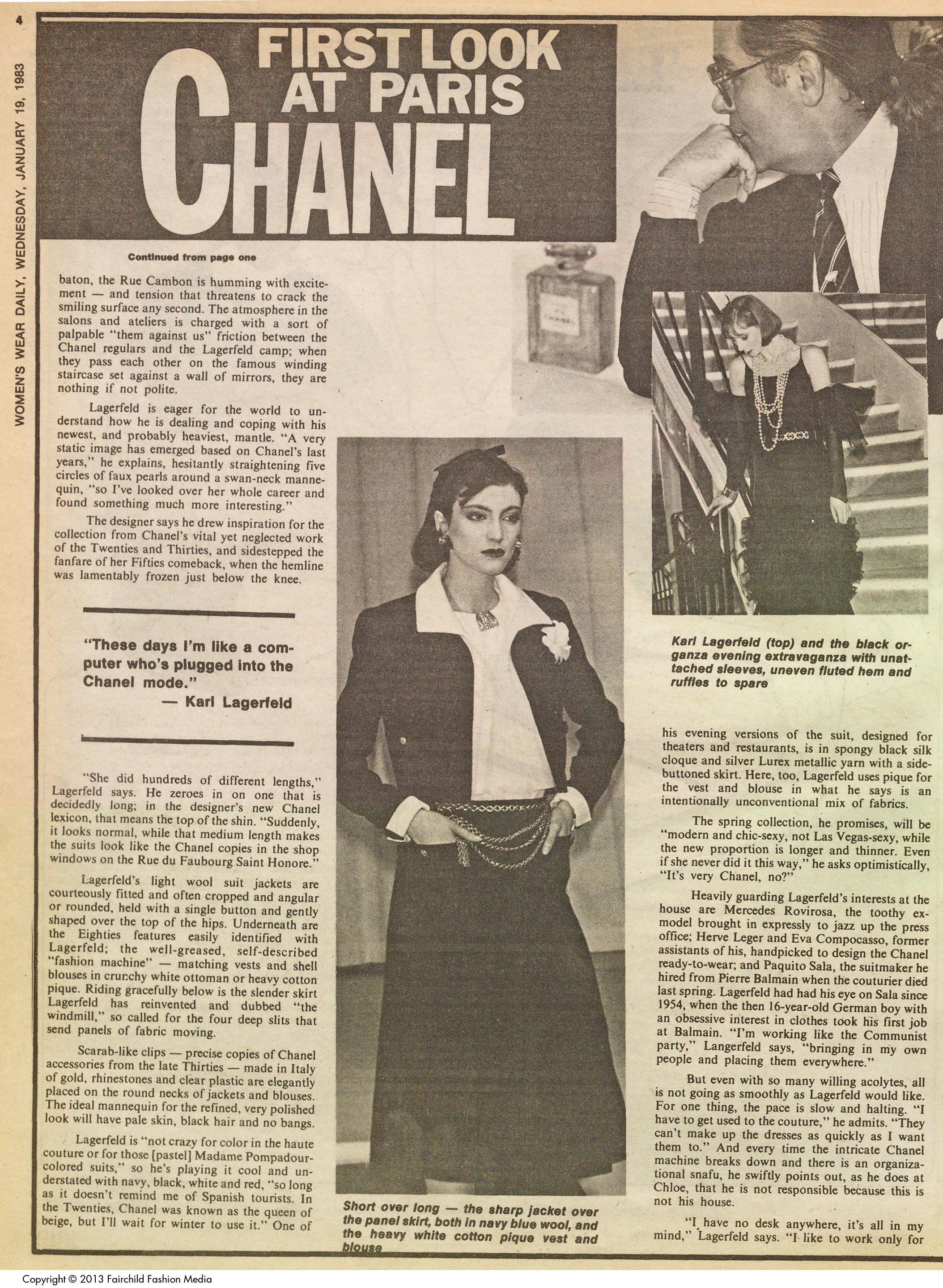 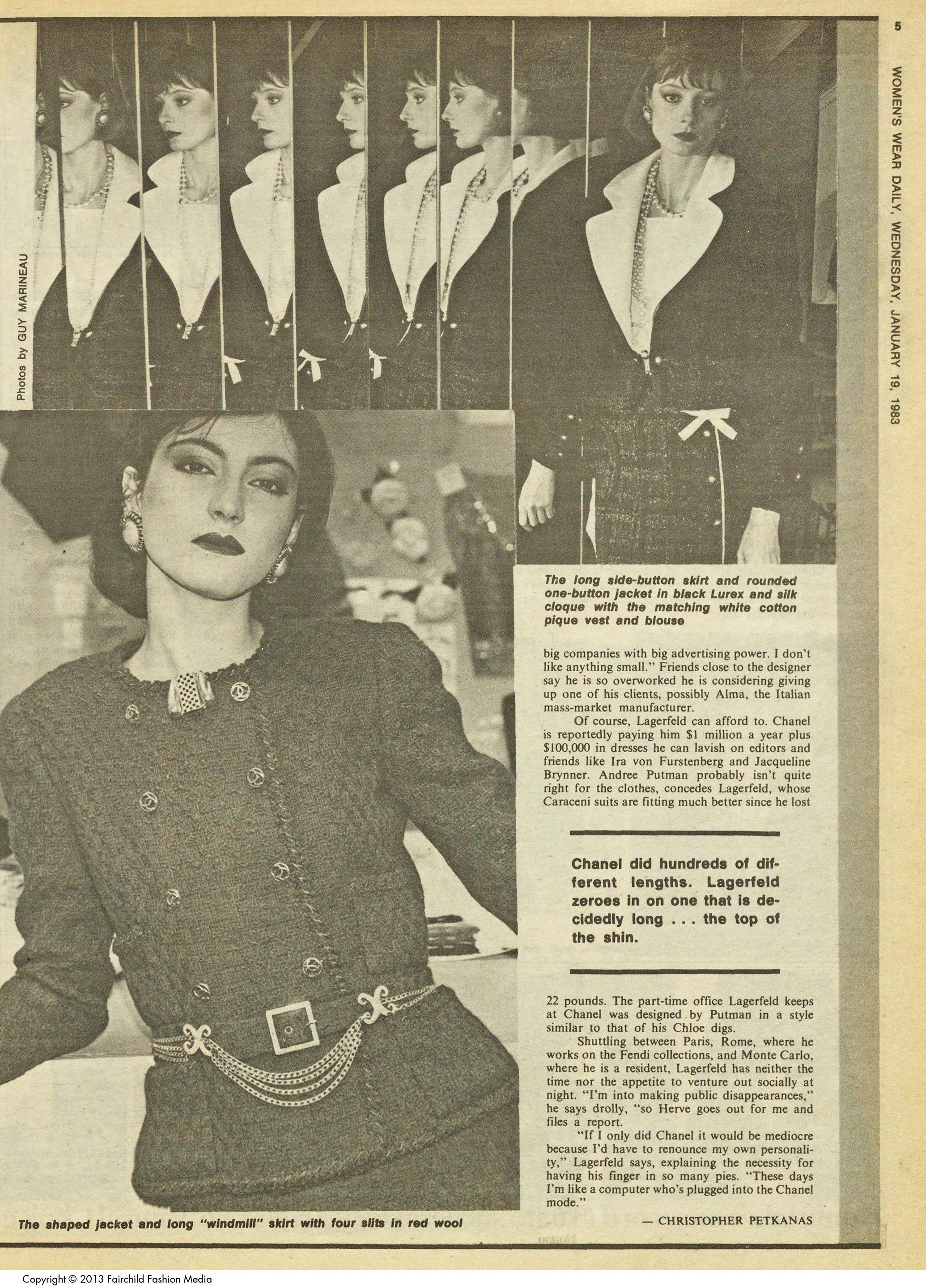