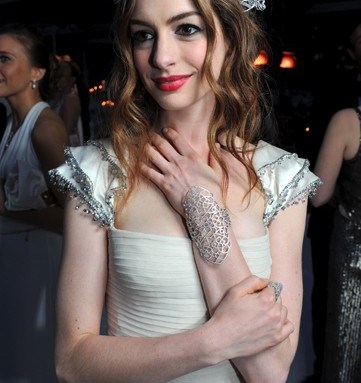 PARIS — Dress codes are made to be broken.

“It’s good to be different. We’ve just had Kate Middleton’s wedding, Kate’s and Charlene’s [Wittstock]. I would have felt like a bride,” Eva Herzigova said as she arrived at Valentino’s spectacular Château de Wideville on the outskirts of Paris for Natalia Vodianova’s White Fairy Tale Love Ball, which called for white or silver gowns.

Dressed in black, with a black feather in her hair, the model said she just shot the latest Duran Duran video with a bunch of her model peers, including Helena Christensen.

Daphne Guinness came dressed like a Technicolor geisha, chopstick headgear and all, in an Alexander McQueen kimono. She said she’s gearing up for an exhibition devoted to her kooky style that will open Sept. 16 in New York, with Valerie Steele curating.

“I always wear red to my events,” said Vodianova, clutching her long braid and posing for photos amidst the wintry, fantasy decor, tables strewn with snow and frosted candelabra.

Guests flowed into the party, many in dresses right off the couture runways, and in the right shades.

Anne Hathaway was a vision in fluttering vintage Valentino with a floral tiara by Stephen Jones. “I asked him to put little charms on it,” she said, twirling to show off a butterfly, tiny clock face and miniature fork jutting out the back. “Isn’t that cute? It’s very whimsical. My favorite fairy tale is ‘Alice in Wonderland.’ I feel like a rock-star, elfin princess.”

Dinos Chapman was grasping for a favorite fable. “‘101 Dalmatians?’” he proposed. Told it’s not technically a fairy tale, the artist retorted, “Yes, but it involves dogs being skinned.”

Tommy Hilfiger quickly identified the one he’s most tired of, having indulged his children with “Snow White and the Seven Dwarves.” “After reading it too many times, you feel like Dumbo,” he laughed.

Giancarlo Giammetti said he’s been knee deep in the world of 3-D and digital. During Paris Fashion Week, he plans to unveil a “virtual museum” for the Valentino archive.

The centerpiece of the night was a fashion show of more than 40 custom-designed dresses, all inspired by fairy tales, that were auctioned off by Christie’s. Participating designers ranged from Agent Provacateur and Chanel to Vivienne Westwood and Yves Saint Laurent. The evening benefitted the Naked Heart Foundation, a charity that aids underprivileged and special-needs children in Russia. To date, the foundation has built 60 play parks in 44 Russian cities.