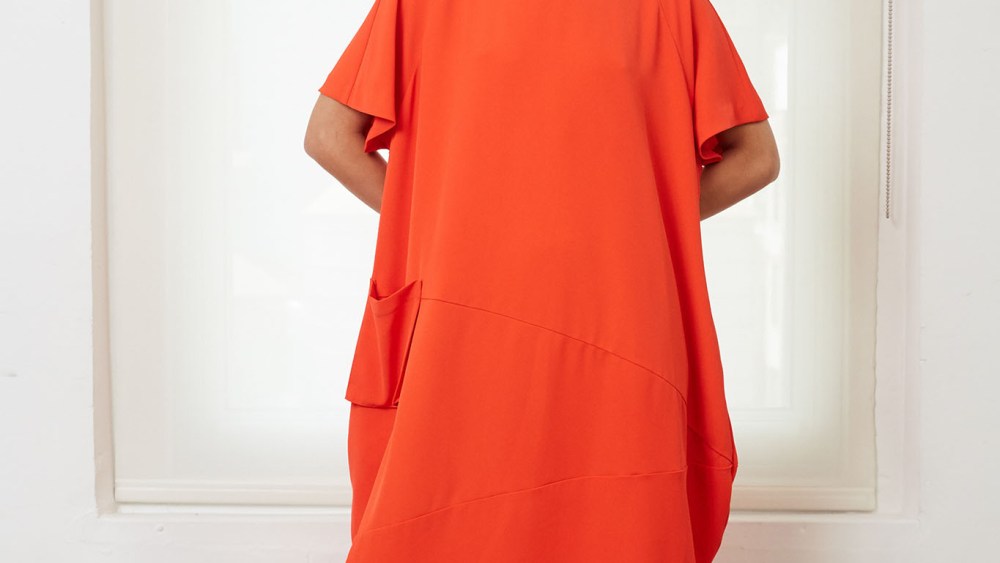 “I want people to go into their closets, and say, ‘Whatever’s in here, I know I’m going to love putting on,’” she added.

The actress, TV host, comedian, author fashion designer and EGOT winner is expanding her Dubgee by Whoopi universe with a more upscale line called Dubgee Forum by Whoopi. Dubgee by Whoopi, a size-inclusive collection that launched last May, got off to a strong start at stores such as Neiman Marcus, Ashley Stewart and Amazon.

“We wanted to make sure we could cover both customers, so we decided to divide the collection into two different zones,” said Joseph Boitano, president of Powell Co. Real, which is manufacturing and marketing the Dubgee brand, in a separate interview.  Boitano is responsible for the growth and development of the Dubgee brand through wholesale, digital and licensing partnerships.

Dubgee Forum by Whoopi is priced 40 percent higher than Dubgee by Whoopi and is being introduced today to stores such as Neiman Marcus, Nordstrom, Saks Fifth Avenue, Rent the Runway and Bloomingdale’s. “We see it as having limited distribution. We also see it as an opportunity for specialty stores. We feel this zone of the business is lacking. This area of fashion for a customer who may be looking for something easier, size inclusive,” Boitano said.

Wholesale prices for Dubgee Forum will range from $65 to $175, while Dugbee wholesales from $40 to $90. The Forum line will have certain key classifications, such as shirting, tunics and dresses — a signature of Goldberg. She collaborated with designer Julie Haus Alkire in creating both lines.

Alkire, who joined in April as creative director, has her own designer collection with her husband, Jason, called Haus Alkire. In business five years, the designers are members of the Council of Fashion Designers of America and were a part of the CFDA Fashion Incubator 4.0.

The first Dubgee by Whoopi collection was designed in collaboration with Peter Som as consultant and creative director. He is no longer involved.

“She and I really sort of hit it off because she had some really great things [in her own designer line] that I love. She had this dress that looks like a paint thing and tells you all the paint numbers of it. It’s from her company. I love her sensibility. It made sense to me. If you get how great that is, then you’re somebody I would like to be playing with. I see things in an odd place in my head and I think, ‘Wouldn’t that be great?’ and other people might say ‘That’s not really going to do it.’”

She said Alkire drew some things for her. “And I said, ‘I want to wear everything she’s drawing,’” Goldberg said.

“It’s really wearable, it’s comfortable,” Goldberg said. “That’s really what I’m looking for. I really just want to be comfortable, and kind of fashionable, but in my own way. What’s been really interesting for me in the last year is discovering there are a lot of women like me, who want something interesting that doesn’t look like everybody else’s and they have embraced me, whether it’s the Ashley Stewart woman or the Neiman Marcus woman.”

Asked if the first Dubgee by Whoopi line performed well at retail, Goldberg replied, “I think so. I try not to get caught up because I think I would get very nervous about how things are going and if you’re selling them. I said to Julie, ‘I just want to make stuff, maybe some folks will like it and some folks will buy it.’ Everybody says that’s fine, but you have to sort of make some money and pay the people back who are investing. I’m learning,” Goldberg said.

She said she’s thinking about designing a men’s line, as well, which she’d like to introduce next year. “It’ll be comfortable, really great sweaters and great peg pants. I’m having a lot of fun looking at things from the Forties, like wide men’s pants and wide men’s jacket,” she said.

Describing her favorite pieces from the new Dubgee Forum line, she said, “I love a lot of the dresses and I’m not a dress person. There’s a great green, tropical dress that I love. It reminds me of Forties Los Angeles. It’s a great one, it lays well on you, regardless of your size. Everybody looks good in it,” she said.

In Boitano’s opinion, “Everything has an ease of fit, something you can wear layered, or on its own. Today’s lifestyle is more casual. We think we have an opportunity to bring into the fold a customer who may not have been serviced right now, who’s looking for something new, who wants fashion. There’s a lot of draping and prints. It gives us the halo effect to grow the collection,” he added.

Like Dubgee by Whoopi, Dubgee Forum ranges in size from small to 3X. The spring Dubgee by Whoopi collection, which is geared to retailers such as Ashley Stewart and Amazon, will be shown to stores in September. That line has more classifications and color multipliers.

Dubgee Forum has 55 styles in the spring collection. The pieces have an easy fit, some are oversize, and they can be worn layered or belted. Most of the dresses and tunics have deep, roomy pockets, which is a favorite of Goldberg’s. The collection, which is manufactured in Asia, will hit stores in January for spring selling. Overall, Dubgee Forum will have four lines a year: spring, transition, fall and resort. The spring collection will have two deliveries.

Boitano said the first Dubgee by Whoopi collection “had a very nice response from Neiman Marcus and Ashley Stewart,” as well as Amazon. “We think part of the response was because of Whoopi and her celebrity, but the clothes have such an ease about them,” he said. The best-selling dress in the Neiman Marcus catalog was a long white dress with big pockets retailing for $298. He said Amazon also did well with shirtings. “That’s what people know Whoopi for,” he said.

The company is still deciding if it will have e-commerce on its web site. For now, the web site is purely informational. There are no plans for a freestanding store. Ideally, Boitano sees the collection hanging near such resources as Eileen Fisher.

Among the key styles are a black cocoon coat in double-faced cotton with a digital bird print; a white poplin shirt with matte black buttons; a cotton poplin dress  in a hand-sketch print; a black jumpsuit with a drop crotch, and a draped crepe de chine dress in a Deco palm print.

Boitano declined to give a first year volume projection.

He said Goldberg will do personal appearances, and already did one at Ashley Stewart “which was a great success.” Goldberg will also be promoting the collection on her Instagram. Goldberg will continue to do her Christmas sweaters, which will be part of the Dubgee’s whole holiday group. They will be shown later this month for early November shipping.

Meantime, Goldberg said she plans to wear all the looks on “The View.”

“I’m going to wear everything. If we make it, I’m going to wear it,” she said. “If I don’t have it on, why would you want to buy it? You have to stand behind what you’re creating, or you can’t ask people to believe you.”

Goldberg said they didn’t promote the Dubgee collection initially with a fashion show on “The View.”

“I think everyone is in a little bit in shock. People would say, ‘you’re not really what we call a fashion person.’ As it turns out, fashion is in the eye of the person who’s wearing it. It’s their sense of who they are, not mine dictating to them. It’s OK to say, ‘I’m that person,’ or ‘I want to be this person today.’”

In addition to working on these fashion collections, Goldberg also has a book coming out in September called “The Unqualified Hostess” by Rizzoli.