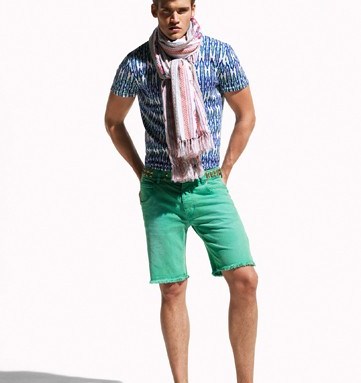 Matthew Williamson hopes to launch a men’s collection under his signature label if all goes well with his H&M men’s initiative.

The British designer’s first men’s collection lands Thursday in 1,600 H&M stores. The retailer broached the idea with him in June, he said.

“They proposed to me to do a men’s line that would complement the women’s, and I thought I would try it because I haven’t ever done men’s,” he said. “I thought it would be interesting to design clothes that I can actually wear for a change. And also, we were thinking of doing a men’s line in the main collection eventually, so this will be a good test for that.”

With his H&M collection, Williamson said he aimed to translate his women’s aesthetic for men.

“I hope it has the same relaxed bohemian spirit,” he said. “In men’s, you are more restricted in the fabrics you can use. I did not want to be too formal or rigid, nor too extreme, or costume. It treads a fine line, avoiding that, but evoking the same spirit as the women’s wear.”

The collection tells the story of an English gentleman who travels to Cuba for vacation and returns via the Greek islands.

“So first you have the structured part,” Williamson said. “There are some very English suits, some English schoolboy, some punk. Then you have Cuban cotton shirts and boardshorts, with highly decorative printed fabrics, and then beachwear, like someone would wear on a Mediterranean high-summer holiday. There’s denim and jersey.”

The first delivery of Williamson’s women’s wear launched at select H&M stores on April 23. It expands to 1,600 stores on Thursday, along with the debut of men’s.

“The intention is not an immediate sellout, but to be present through the season so more people will be able to access it,” he said.

Williamson founded his women’s label in 1997. His use of color and pattern then landed him at the creative helm of Emilio Pucci. But since last year, he has been focused solely on the expansion of his namesake brand.