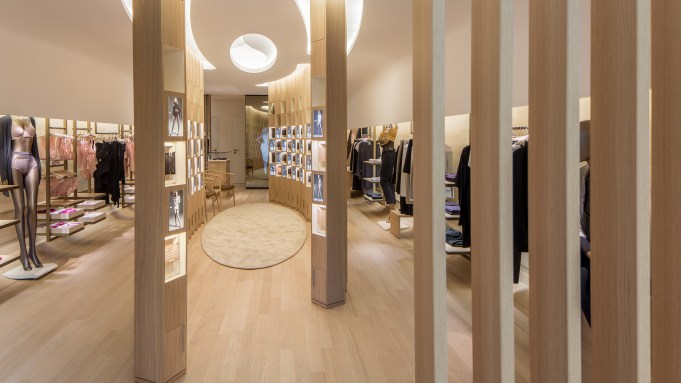 BERLIN — Wolford has launched its most physical “second skin” yet with the premiere of the hosiery specialist’s new shop design here.

The work of Parisian architectural office Rena Dumas Architecture Intérieure, the refurbished, roughly 925-square-foot Wolford store on Kurfürstendamm is sophisticated, sensual and even surprising, with not a stockinged leg form in sight. Instead, one enters a natural environment, with the floors, walls and flexible shelving along the sides all made of light, matte-finished oak, as is the store’s literal centerpiece: the legwear gallery.

A curved, double-screenlike construction, the gallery offers a peekaboo vista on one side, in an architectural nod to mesh stockings, and serves as a wooden partition on the other. The key innovation, however, is the way the Wolford hosiery range is presented. For each style, there is a full-page photograph of a model wearing the stockings in question, and then a display board mounted with the actual hosiery material so that customers cannot only see, but feel the sample. The stockings themselves are filed away to the side of each display, so customers can help themselves if desired.

For Wolford chief executive officer Ashish Sensarma, the store design is about “a journey of discovery…one that’s discreet, for you don’t see all. It’s a moment of rest. We say come in and chill a bit. Relax.”

Beyond hosiery, which contributed 49 percent of Wolford’s group sales of 162.4 million euros, or $180 million, in the 2015-16 fiscal year ended April 30, the Bregenz-based company’s assortment comprises lingerie and intimates, as well as ready-to-wear. Dollar figures are converted at average exchange rates for the period to which they refer.

“Our design philosophy is to design in three dimensions,” Sensarma remarked, focusing on the circular knits that Wolford helps develop with its partners in Austria. The brand’s range is fully produced domestically, with some finishing done in Slovenia.

Here, too, the store breaks with tradition, interspersing some highly colored bras among the featured apparel, Sensarma arguing “they’re underpinnings, after all.” Nonetheless, there is also a devoted area to lingerie beyond the legwear gallery, and a rtw lineup on the other side of the store, though all display elements are flexible to allow — and encourage — frequent in-store changes. Other features include a digital mirror for consumer-company interaction, with behind-the-scenes videos, new products and highlights. Similarly, slides of product innovations are incorporated into the dressing room mirrors and one can change the lighting to “see how you’d look in the evening. But the biggest thing is that we’ve removed all the packaging,” said Sensarma. “Finally, you can see the brand the way it’s supposed to be, not hidden in boxes.”

The Berlin store design will next be unveiled in Shanghai on Sept. 15, with Beverly Hills to follow sometime in 2017. “For proof of concept, we will watch consumer reaction for the next three months, and then roll out globally over the next three years,” he said. Wolford operates 100 stand-alone, company-owned stores out of 200 Wolford stores, including franchises and outlets. Active in 63 countries, the label’s assortment is available in approximately 3,000 multibrand points of sale.

The heritage brand has been in the midst of a revitalization program under Sensarma’s leadership. Most recently chief operating officer of luxury swimwear brand Vilebrequin, the long-term Mexx executive joined Wolford 18 months ago.

One big move has been to establish one European price last year. Prices are harmonized across Europe, and then elsewhere there is an index to the euro. And the brand’s delivery rhythm to stores, with two major collections and then new additions every two months, has also borne fruit. “Our supply chain has never looked better,” he stated.

Wolford’s online business is “on fire. It’s been excellent,” the executive continued. Wolford is also on the verge of expanding its social-media activities, plus the Wolford web site will be relaunched this month.

As for product, Sensarma added that “the whole idea is to increase the value of the product, not the price. We’re bringing the environment up, adding value.”

Under creative director Grit Seymour, who came on board in early 2015, Wolford’s look has quietly been updated and streamlined. “The focus has been on everything visual, starting with the collection, to the shop concept, the windows, the packaging and all photos, beginning with Mario Testino, who is now doing the campaign shots,” she said.

For the season ahead, she pointed to a revival of patterned and opaque tights, and in terms of innovations, was particularly enthusiastic about the new “comfort cut,” which allows customers to adjust the fit of their tights by making specific cuts at the waistband.

Citing “negative events in important core markets (i.e., political uncertainty in the U.S., fear of terrorism in France, Brexit),” which have led to weak consumption and declining customer traffic, as well as negative currency effects, Wolford said it expects sales for the full 2016-17 fiscal year to be flat or fall slightly below last year’s level, with an operative loss in the lower-single-digit million-euro range. Wolford also plans to accelerate selected measures to improve earnings, leading to somewhat higher restructuring costs than originally forecast.

“In order to achieve our medium-term margin targets,” which Wolford has not amended, “the speedier implementation of the approved measures will take precedence over the short-term objective of generating positive operating results at the end of this financial year,” Sensarma declared.