The 26-year-old Sydney designer will head to London Fashion Week in February with four other regional finalists for the grand final. 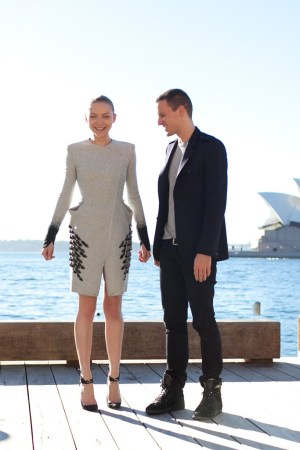 SYDNEY — Dion Lee has been on the fast track since he launched his label in 2008 straight out of design school. Now he has taken Australia’s biggest fashion purse as the regional winner of the International Woolmark Prize.

Announced at a dinner for 100 at Sydney’s Museum of Contemporary Art on Monday night, the 26-year-old Sydney designer has won 50,000 Australian dollars ($51,129 at current exchange) and will head to London Fashion Week in February with four other regional finalists for the grand final, to compete for a further 100,000 Australian dollars ($102,258). The finalists, who so far include Sophie Theallet (U.S.), Christian Wijnants (Europe) and Ban Xiao Xue (China), with an Indian winner to be announced this week, will be judged on their capsule collections made from Australian merino wool. The overall winner’s collection will be sold beginning in August 2013 through Woolmark’s key retail partners, including Harvey Nichols in the U.K., Lane Crawford in China, Bergdorf Goodman in the U.S. and Australia’s David Jones.

“I am very excited and very positive about this competition because I think it has the potential to make a significant difference in a brand’s business — it’s not just a trophy and prize money, it’s about helping that brand grow on all levels,” said Lee, whose sculptural gray felted merino wool coat dress with intricate rubber thermal film needle-felted detailing on the cuffs and hips won over the judges — unanimously, they say — from fellow finalists Kym Ellery, Carl Kapp, Song for the Mute, Magdalena Velevska and Christopher Esber.

Graduating from the Sydney Institute of TAFE’s Fashion Design Studio and noted for his avant-garde tailoring, Lee won the Woolmark Designer Award at the 2009 L’Oréal Melbourne Fashion Festival and the fashion category of the Qantas Spirit of Youth Award in 2010. He made his solo runway debut at Australian Fashion Week in 2009, headlining the event for the next three years. He has approximately 30 stockists in Australia, Hong Kong, Singapore and online — most notably Net-a-porter.

Lee’s biggest account is David Jones, where he does “phenomenally” well, according to the department store’s head women’s buyer David Bush, who was also on Monday’s judging panel.

“Dion was kind of the clear winner and it was unanimous, because I think we thought he was a strong ambassador for fashion internationally for Australia and that he has probably a good chance of winning the entire competition,” said Nicoll who, although British-born and based, spent his formative years in Perth, Western Australia.

“He [Lee] really is the real deal,” said Carfrae.