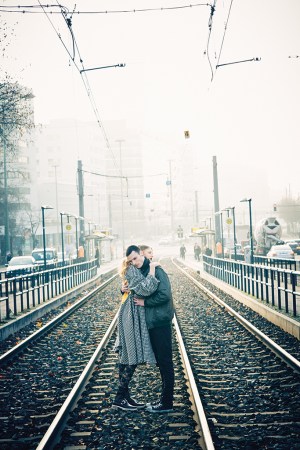 BERLIN — Wunderkind is on the move. Wolfgang Joop’s luxury label has relocated its headquarters from Potsdam, Germany, to Berlin; its seasonal showplace from Paris to Milan; positioned fashion veteran Peter Kappler at the entrepreneurial helm as managing director and partner, and invited a temporary quartet of designer Wunderkind to add a fresh twist to the upcoming season.

Leaving the Rumpf Villa and lakeside Potsdam behind, Wunderkind’s design, pattern-making and administrative departments as well as showroom are now spread across 10,750 square feet on the top floor of Schlüterstrasse 45. Though far more urban than the label’s former neo-baroque home built for animal painter Fritz Rumpf in 1895, the 1912 Berlin landmark off this designer-studded stretch of Ku’damm (including the Wunderkind flagship) also boasts an artistic past.

Originally constructed for a banker, the building housed the much-loved artists’ hideaway, Hotel Bogota, from the Sixties on. Even more evocative is the fact Wunderkind is located precisely where the famous German fashion photographer Yva had her atelier, and where the 16-year-old Helmut Newton learned his trade 1936 till his emigration in 1938.

Kappler, who was most previously chief executive officer at Dondup and before that Jet Set, worked with Joop in the late Nineties when he was director of the designer’s first fashion company. He took up the reins — and a stake — in Wunderkind in early 2015, but has kept a low profile till now, preferring to make the changes before talking about them, he told WWD.

“We moved the company to Berlin because I thought it was more metropolitan,” Kappler remarked. “It’s a better place to attract talent because people want to come to Berlin, more perhaps than to Potsdam. Plus generally speaking, everyone at the moment loves Berlin. It’s good to be a creative, totally independent fashion company that’s from Berlin.”

Next move: to Milan, where Wunderkind has long had a showroom but will now also stage the fall presentation at 10 Corso Como on Feb. 28. “We decided to show for the first time in Milan because it felt like a better fit with our spirit and DNA. From my point of view Milan is now the most modern [venue]. And if you do a new start, it’s better to leave the old road,” Kappler went on.

In Milan, retailers and press won’t only be seeing Joop’s signature high-low Wunderkind style mix, which marries double-face cashmere, African wax prints, ankle length frocks, lumberjack checked shirts, Prince of Wales shearlings, geometric patterned knit banding, juvenile cartoon characters, pretty slipdresses and screen-printed slogans such as “Just the Right Amount of Wrong,” or “Trust Us. You Can Dance” for fall. As Joop noted, “We’re bringing a Berlin street touch, a young people’s touch to high fashion, mixing things up and down. There’s a touch of pre-Raphaelite translated to glam rock, because I wanted to quote that, too. I want all those contradictions.”

Joop also assembled a quartet of young designer labels that were invited to Berlin last fall to create their own “next generation Wunderkind” capsule collections under his mentorship. Footwear by Nicolo Beretta (Giannico); men’s wear by “Comeforbreakfast” duo Antonio Romano and Francesco Alagna; handbags by Maria Sole Cecchi (Les Petits Joueurs), and women’s wear designed by Serafina Sama (Isa Arfen) will be shown alongside the Wunderkind collection in Corso Como.

“It’s tomorrow’s view, their view of Wunderkind,” Kappler explained, adding “if we like what we see, the pieces will be sold in Wunderkind stores” under separate labeling. How long the cooperation will continue is open. “With one or the other we will continue, with one or the other not. The idea is to build up a crowd of the most talented people around him [Joop], keeping the brand’s DNA going but without a spirit of competition.”

As for Joop, he noted that when he started Wunderkind in 2003, “I wanted to create a roof. I didn’t want to be the Wunderkind myself.” Through his teaching at the Berlin Academy of Arts, he made a practice of taking on some students to work in the Potsdam atelier. “We always have young assistants or interns working for us, but we’re the ones who make the final choices. With this new project, I wanted to let the designers themselves take charge. And while I enjoy working with the same people, I also thought an infusion of new blood could be good.”

Kappler and Joop are banking more on creativity than strict commercial thinking to move Wunderkind forward. “We are not the ones to do cheap, nice, minimal pieces,” Joop remarked. “That’s done by others. The German market tries to compromise as much as possible. [Brands] have a customer in mind and want to please them again, and again and again, with the same approach. It’s just business. And while fashion is, of course, a business which makes no sense if nobody wants to wear it,” he stressed, “we also need emotional inspiration. Irritation. Something!”

“We and the industry have to go back to basics,” Kappler suggested, “doing a product well and delivering it at the right time. But we will offer pre- and show collections per season, and that’s it. I don’t want to put the design team in a situation where there’s no creativity anymore,” he stated.

As for distribution, Kappler isn’t keen to expand the brand’s own-store network beyond its four doors in Berlin, Hamburg, Munich and Sylt. “We’re not looking in the first instance to build a chain of our own stores. Nor is Germany the prime focus,” he said.

Rather, working out of showrooms in Milan and Paris, Kappler noted the interest in Wunderkind is more international. Key accounts include 10 Corso Como and Antonia in Milan; Estnation and Isetan in Japan; Ciolina in Bern, Switzerland; Kabuki in Paris, and Bosco Dei Ciliegi in Moscow.

He also sees potential for Wunderkind in the U.S. “In my experience, American clients understand quality, and we are 100 percent Made in Italy. The sexiness we do is not sexiness at first view. We’re a little bohemian bourgeois, and always have been, and for this market, I see a great chance.”

Some have likened the goings-on at Wunderkind to a start-up. Kappler isn’t adverse to the description. “Just ask Wolfgang,” he responded. “He feels new born.”