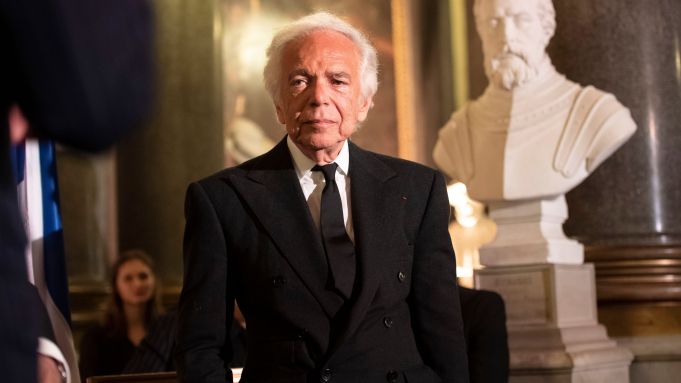 Fifty, fabulous and still going strong. That distinction is unique in fashion, applicable to exactly one designer-founder, not just now, but ever: Ralph Lauren.

Celebrating the 50th anniversary of his company’s launch with a magical, memorable event at Bethesda Terrace in Manhattan’s Central Park was the pinnacle in a seminal year for Lauren that included numerous other points of distinction. Most, though not all, had some tangential connection to the anniversary; several spoke to the broad-based appeal of this icon of global fashion who has achieved a level of power and influence elusive to all but a handful of giants, his appeal transcending distinctions of geography, nationality and where the heck you came from. In September, this guy from the Bronx threw out the first pitch at Yankee Stadium in a game against the Boston Red Sox (he reached the plate, albeit in the dirt); two months later, he received notice of knighthood. To be exact, he was named an Honorary Knight Commander of the Most Excellent Order of the British Empire, and can add a nifty “KBE” after his name, if he wishes. The only American designer so honored, Lauren will receive the knighthood insignia at a ceremony next year. Said Antony Phillipson, British Consul General to New York and Her Majesty’s Trade Commissioner for North America, “In fashion, business and philanthropy, Mr. Lauren has played a key role in forging transatlantic cultural and economic connections…Mr. Lauren has been a vanguard for the global fashion industry and American style for nearly half a century. In addition, monumental philanthropic efforts, especially in the realm of public health, cancer research and treatment in both the U.S. and the U.K., have led to benefits felt by citizens around the world.”

Earlier this month, France got into the act, with the French-American Foundation honoring Lauren with a dinner at Versailles, part of a Parisian sojourn that was supposed to include as well a ceremony noting his elevation to Officer of the Legion of Honor, an upgrade from the Knight of the Legion of Honor that he received in 2010. But that event was pushed into next year due to the political disquiet that has overtaken Paris.

Yet not all of Lauren’s news-making was ceremonial. Big picture, 2018 is the company’s first full year under president and chief executive officer Patrice Louvet, who assumed that position from Procter & Gamble in May 2017 after the brief, not-a-good-fit tenure of Stefan Larsson. This past June, at its investor day with Wall Street analysts, the company unveiled its Next Great Chapter five-year strategic plan, focused on five priorities: to win over a new generation of customers, energize core products and accelerate underdeveloped categories, drive targeted expansion in its regions and channels, lead with digital across all activities and operate with discipline to fuel growth. “With a clear plan, Patrice’s leadership and our dedicated, passionate teams all over the world, we are reigniting the entrepreneurial spirit that is at the heart of our heritage and culture,” Lauren said at the time, while reiterating his oft-stated insistence that he’s not about to retire.

The plan was put into play during a year of relative volatility for the company’s stock, which saw a low for the year of $100.09 in February and a high of $147.79, in July. While second-quarter earnings and revenues reported in November beat Wall Street estimates, the stock suffered due to investor concern about anticipated higher costs. Still, it remains up a scant 1.56 percent year to date, and on Tuesday closed up 0.16 percent, at $105.31.

Product activity throughout the year often linked back to the anniversary. The Polo Bear Collection, the first watch range created especially for the Polo brand, features four timepieces each with a different manifestation of Lauren’s cuddly mascot — Flag Bear, Martini Bear, Preppy Bear and Spectator Bear. Lauren called it “a purely fun project.” Then there was a one-off capsule collection for Mr Porter, an 83-piece lineup based on favorite archival pieces from the Polo, Purple Label and RRL collections. There was also a collaboration with the British skate brand Palace.

Yet for all the surrounding activity, the anniversary festivities anchored Lauren’s year. After taking the fashion flock to Bedford in 2017 for dinner in the garage, home to his remarkable car collection, everyone wondered, how could he possibly match the impact of a $40 million Bugatti? He did so not with flash but with an only-in-New-York evening that was all about elegance, refinement and civility, yet with none of the arch formality often inherent in such an approach. Rather, a wonderful familial feel radiated through the whole thing, but with a crowd that was as A-list as it gets, from Hillary to Kanye to Blake Lively to De Niro to Bruce Springsteen to Steven Spielberg to Anne Hathaway to Jessica Chastain, and a host of designers — Calvin, Donna, DVF, Carolina, Vera, Tommy, Michael, Thom Browne, Jason Wu and Alexander Wang.

But this wasn’t just a milestone-marking party. It was a fashion show, a designer’s essential statement of the season, in Lauren’s case, fall. (Utterly comfortable going contrary to the larger luxury-industry grain, he remains resolutely buy now/wear now.) Had the show been bad or even so-so, it would have tempered the evening’s high spirits, with nostalgia trumping belief in the power of Lauren’s present. It was fabulous, absolutely one of his best shows ever, and, as such, a potent reminder of his and his brand’s ongoing creative relevancy.

The impact started with genius casting, people of all types, ethnicities and ages, including the kids of staff members and friends, everyone looking completely natural and real, as if they loved spending time together. “This is about the world. It’s about change,” Lauren said before the show. “It’s about all kinds of people, all kinds of countries. This is an inspiration of what I feel is happening with young people that are individual and love individuality.”

They wore clothes that beautifully addressed two ongoing big-picture themes currently dominating fashion. The feisty Polo Sport portion reminded that the crossover of street and sport into mainstream style didn’t start yesterday. And the section that commingled the women’s collection and RRL argued for a relaxed, personal approach to getting dressed, yet with an array of exquisite, intensely wrought clothes featuring highly developed fabrics, lavish embroideries and remarkable patchworks.

After the show, guests moved from the covered arches of the Bethesda Terrace to the fountain area for dinner, where, in an emotional address that was both personal and universal, Lauren’s friend and admirer Oprah Winfrey put his career and ethos into perspective. “We are here to celebrate you, Ralph Lauren, and 50 years of you designing our dreams, 50 years of you stimulating our ambitions, 50 years of you creating a sense of value, that brought goodness and wholesomeness to glamour. Your story exalts our collective story…[that story] is not just about fashion, but represents what is great about America…

More recently, at the Versailles gala, French writer Phillippe Labro expressed Lauren’s impact differently. “Ralph Lauren is the kind of American one dreams of,” he said. “An artist-designer, an entrepreneur-manager, a conceptualist and a humanitarian and, lastly, the head of a dynasty. He is what you call a star.”

A star who had a year to remember.