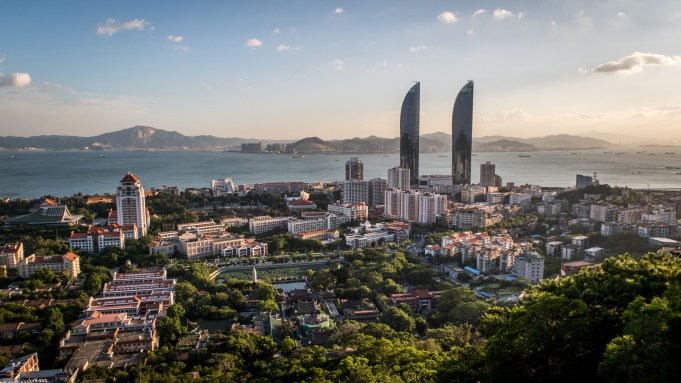 XIAMEN, China — Coastal living and designer-friendly government grants are just some of the reasons why many of China’s top young designers are beginning to call this city home.

Located in Fujian Province, a stone’s throw from Taiwan, Xiamen has been a key import and export hub since the 1500s, when European traders first arrived in search of tea. In recent years, this laid-back seaside city of 3.5 million people has become home to a burgeoning fashion, design and art scene. With the local government pushing fashion-forward initiatives via everything from discounted studio rent to onetime grants of up to 500,000 yuan, or $76,000 at current exchange, Xiamen is hoping to transform itself into China’s new fashion hub.

Designers Shangguan Zhe of Sankuanz; Yifang Wan; Min Liu of Ms Min; Cotton Yu of Mymymy, and Dido Liu of Deepmoss are just some of the designers based in Xiamen. Local labels such as Ports, Jorya, Anta and Septwolves also call the city home. In 2013, a New York Times Chinese language article compared the city and its designers to the Antwerp Six, referring to them as the “Xiamen Gang.”

In September, Beijing-based designer Vega Wang will join the fold, moving her production from the capital to Xiamen, citing rising labor costs and general quality of life.

A graduate of Central Saint Martins in London and a former intern at Vivienne Westwood and Alexander McQueen, 30-year-old Wang said she arrived in Xiamen after graduation looking to work for an independent designer. That’s where she found Zhe from Sankuanz. Noticing their differing designs, Zhe encouraged Wang to branch out on her own. Since then, she launched her own label, which has received high praise for its British equestrian-inspired aesthetic. She said returning to Xiamen, where she lived for a year before moving to Beijing in 2007, is a homecoming of sorts.

“Our company is growing fast and Beijing is not a good place to stay to make production,” Wang said, explaining how Xiamen, being located in Fujian, is also near to Guangdong province — both major textile hubs. Wang’s clothes are sold at Opening Ceremony, Shin Kong Place, Galeries Lafayette and local multibrand shops across China. Her sales have been increasing 15 to 20 percent each season, she said.

“Since 2008, I preferred to stay in a bigger city because I needed to build my team and make some noise and Beijing is a good place because all the media is based here and it has lots of artists and musicians here, too,” she said.

But as labor costs rise and Beijing’s air quality worsens, Wang thought about a better quality of life for her and the business. She plans to keep her Beijing studio, located in a traditional alleyway hutong, where her marketing, public relation and sales staff will remain, but move the rest to Xiamen.

“[Xiamen] is always chill, the people are nice and every day you wake up to the ocean. The environment is very beautiful,” said the designer, who is building a beachside studio. “The rent is very cheap [in Xiamen] and that’s a reason, too. But [in Xiamen], it’s regionally known for quality pattern makers and machinists.

“Now Beijing is cleaning up. Lower level workers are getting kicked out and the fabric markets are getting pushed out and moved to Tianjin and Hebei. All of this news made me think about my next move,” she added.

Xiamen’s tranquil surroundings and proximity to the country’s southern textile belt and fashion cities such as Hong Kong, Shanghai and Taiwan make it an attractive base for business. Recently, the Xiamen government has been fervently promoting the island as China’s fashion hub. It has rolled out its own fashion week and awarded onetime government grants to designers who decide to base themselves here. To qualify, designers must meet an intricate scheme of requirements covering everything from the amount of international press coverage to the level of sales revenue.

In 2014, Xiamen’s apparel industry generated $35 billion in revenue, according to Weng Xiaolan, head of the city’s social development and the development and reform committee, adding that 2015 figures will be revealed in October.

Apart from Zhe and Yu, the rest of the designers moving here graduated from Central Saint Martins or the London College of Fashion. Speaking about the trend of Chinese designers returning home to launch their own labels, designer Yifang Wan said this is partly due to the U.K.’s visa restrictions that previously required international students to leave the country after graduation. However, these rules have relaxed in recent years. Now more Chinese designers can stay in London to start their own businesses under the entrepreneur visa whereby candidates need to have access to a minimum of 50,000 pounds, or about $65,000 at current exchange, in investment funds to qualify.

The recipient of the L’Oréal Professional Award in 2010 and the Lane Crawford bursary award during her studies, Wan started her namesake label in 2012, traveling between London and her hometown of Xiamen. Due to her new life as a parent and also to save costs, Wan decided to move production to China. At first, she wanted to be based in Shanghai but the difficulty of finding a studio became overwhelming. “I had to get started right away because of orders and couldn’t spend more time looking for a studio, so by default, I returned home to Xiamen,” she said.

“At the beginning, the samples were a disaster,” Wan said, explaining how she carefully taught her team how to make her minimalistitc, chic clothes from scratch. “But after some practice, it became much better,” the designer said as builders worked on the new extension of her studio in the background. “Being here also changed my designs. In London, it was all about fashion, making the garments look beautiful, doing a lot of draping and not paying too much attention to comfort. But now, being here, I really pay attention to comfort and think about how to make the garment relaxed for my clients.”

Former LVMH Prize finalist Zhe of Sankuanz is an unlikely designer. Trained as a graphic designer, the 32-year-old is referred to as a “big brother” for the young designers in the city, always willing to offer words of encouragement and his studio space if need be.

“When I returned from London I didn’t have a working space and Zhe generously let me use his studio,” Wan said

Last year, Zhe launched his own multi-brand shop in Xiamen called AKP, selling the collections of local designers as well as offering lifestyle items and a café. After The New York Times’ article, Zhe said the government tapped him for meetings to brainstorm ideas.

“Previously, the government put a lot of emphasis on science and tech. After [the article], they paid attention to fashion. In Fujian province, the fashion and production industry is really big here. But in recent years, some production companies didn’t do so well, so I think the government wanted to help more young designers [as well as the] production side of the industry,” he said.

Designer Liu Min, an LVMH Prize finalist this year, said a common question she received during the contest was: “Are [these clothes] really made in China?”

The 35-year-old designer said the judges were impressed by the quality of her elegant and modern clothes, but constantly went back for second looks to be sure they were products of the Middle Kingdom. The former Viktor & Rolf intern and Ports 1961 designer added, “For a long time, China has been considered to be the place to produce something fast and cheap and now there are more and more luxury products coming up,” Liu said, describing her designs as combining “edge with ease.”

Her husband, Ian Hylton, former men’s wear designer for Ports 1961 and current president of her label Ms Min, said Xiamen is a great place to be based due to its coastal nature. The only drawback: “Finding models.”

“We were in a cab in Shanghai looking for studio space and the traffic was terrible. [Min] and I just looked at each other and thought: this is not for us,” Hylton said of their Shanghai hunt five years ago.

Ms Min is stocked at her flagship in Shanghai as well as at Lane Crawford in Hong Kong, Shin Kong Place in Beijing, United Arrows in Tokyo and her original sales spot Taobao, though Liu and Hylton said they’ve been dealing with a slew of counterfeiters on the e-commerce site, trying to catch vendors who are ripping off their designs and selling for less. “I’d be here all day if I were to tell you how many [counterfeiters] there are,” Liu said.

Hylton said they’re working on expansion in Asia and Europe. Asked if it’s difficult to work with her spouse, Liu said: “It was difficult at first, but we made a rule: work talk stops at the bedroom door.”

Xiamen’s old quarter is a neighborhood in transformation whereby antiquated buildings are being razed, making way for rows of new restaurants, design and art shops. Businesses open closer to the noon hour and nearby is Cotton Yu’s vintage-style café and bar, Thank You, opened seven years ago with her DJ husband, Dave. The former editor of the now-defunct culture magazine titled M Style, Cotton launched her casual street wear label Mymymy after her former intern, Zhe, encouraged her to do so when the magazine folded.

“[Xiamen’s] not like Beijing, or Guangzhou, it doesn’t have a bright local culture…it’s an environment that gives you so many chances to slow down and focus on what you want to do. It’s not about chasing really fast returns. Everybody here is really focused on doing things step-by-step and doing it perfectly,” Cotton said.

Mymymy is sold on Taobao and has grown from an initial staff of two people to now, 10. Yu declined to provide sales figures.

“This is the Amoy life,” Dave explained, recalling the city’s ancestral name. “People like to enjoy life here and don’t like to work too much,” he said, with a bright smile, beckoning his staff for a round of cocktails. “It’s better to have a drink first,” he said, serving his custom cocktails.

Most nights, one can find the designers having a meal or drink at Thank You. The only downside about Xiamen, Dave said, is that everything pretty much shuts down at 10 p.m.

“That’s why I started this bar,” he beamed.