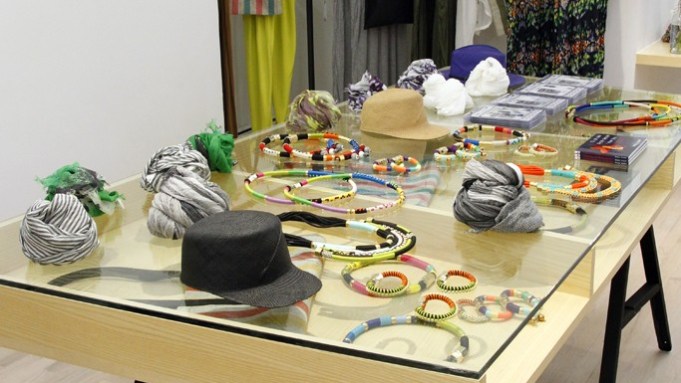 The contemporary sibling of Yigal Azrouël’s signature collection, Cut25 today will unveil its first store, a 1,400-square-foot flagship at 129 Grand Street in SoHo. It’s expected to do sales of $1,000 a square foot and is the first of three Manhattan units Azrouël plans to open by year’s end in locations such as Bleecker Street and Third Avenue in the 60s. The designer has a goal of launching 10 Cut25 stores by 2013.

“We’re going to have assertive company-owned retail,” said Azrouël, who also is targeting malls and shop-in-shops in department and specialty stores. “Clients asked for this. We felt there was a void in the market. There was a need for something sexy, young and fresh.”

“The [Cut25] girls want to buy it now and wear it now,” Azrouël said, adding that his main collection was nurtured for over a decade. “For me, designing [Cut25] is more about the trends. I think of the cool downtown girls and how they layer their pieces.”

Cut25, which uses techno knits, washed silks and fabrics with graphic prints, and slits and cutouts as design elements, is priced 55 percent below the signature Yigal Azrouël line. A Cut25 techno knit dress with braided chiffon appliqués and ribbed side panels is $520. A washed crepe de chine dress with open back detail and contrast piping is $295. Two-in-one jackets and coats have removable sleeves for versatility. A tan raincoat that doubles as a coat dress is $595 and a leather motorcycle jacket that converts to a vest is $995.

Azrouël, who opened his eponymous flagship on West 14th Street when the Meatpacking District “was like the Wild West,” said he’s looking for space near Cut25 for that collection. “What’s happening in the neighborhood is exciting,” he said, citing the opening of the Mondrian Hotel, the upcoming launch of Alexander Wang’s store and fixtures such as Opening Ceremony. “We like to cluster first then grow into a new city,” said Donata Minelli, chief executive officer of Yigal Azrouël, adding, “We currently have no investors, but we may as we roll out.”

Cut25, which launched at Bergdorf Goodman, Saks Fifth Avenue and Intermix, now has 175 distribution points in 15 countries. International expansion is a priority. The brand is sold at Harvey Nichols in the U.K. and Middle East and will be presented at Tranoï, the Paris trade show.

Cut25 is adding a full handbag line for spring 2013. Sunglasses, swimwear and shoes are under discussion. The brand offers scarves, belts and select handbags, while other designers contribute jewelry and hats. “I love the idea of having other designers and artists in the store,” Azrouël said. “People who I know on a personal level and collaborated with in the past.”