The collection is available at the Yoox, Net-a porter, Mr Porter and The Outnet online stores at the same time — a first for the group — and is the result of a training program developed by YNAP and HRH The Prince of Wales, president of The Prince’s Foundation.

HRH The Prince of Wales and Federico Marchetti with six of the Modern Artisans at the final collection review at Dumfries House.

That opportunity is provided by The Modern Artisan project, which is unveiling the Yoox Net-a-porter for The Prince’s Foundation capsule collection on Thursday across the Yoox, Net-a porter, Mr Porter and The Outnet online stores at the same time — a first for the e-tailer.

The capsule is the result of a training program developed by YNAP and HRH The Prince of Wales, president of The Prince’s Foundation, blending and celebrating traditional Italian and British craftsmanship with digital tools such as data insights. The goal of The Modern Artisan is to strengthen textile skills and train artisans in the U.K. and Italy to produce luxury apparel collections.

“This project is the sum of my work for 20 years, of all the values that I have tried to infuse, the importance of data, of digital education and of luxury as longevity, so I am personally passionate about it,” said Federico Marchetti, Yoox Net-a porter Group chairman and chief executive officer, who considers this “the grand finale” of the 20th anniversary of YNAP.

The Modern Artisan has been in the works since spring 2019 but dates back to the end of 2018, related Marchetti. “Prince Charles came to see [the YNAP] Tech Hub in London and we discovered we had a friend in common; the human aspect is always fundamental, as much as technology. He invited me to Scotland to see what he does for young people to create jobs and his textile program. He challenged me to create a project that would have to do with his great love for Italy, together with his great passion for sustainability,” said Marchetti, who shares this commitment with the prince.

The result is a fashion collection that is made by hand with luxurious fabrics, ranging from Johnstons cashmere to silk from Como. “This is not an amateurish project,” Marchetti touted. “The result is beyond my expectations in terms of quality.” 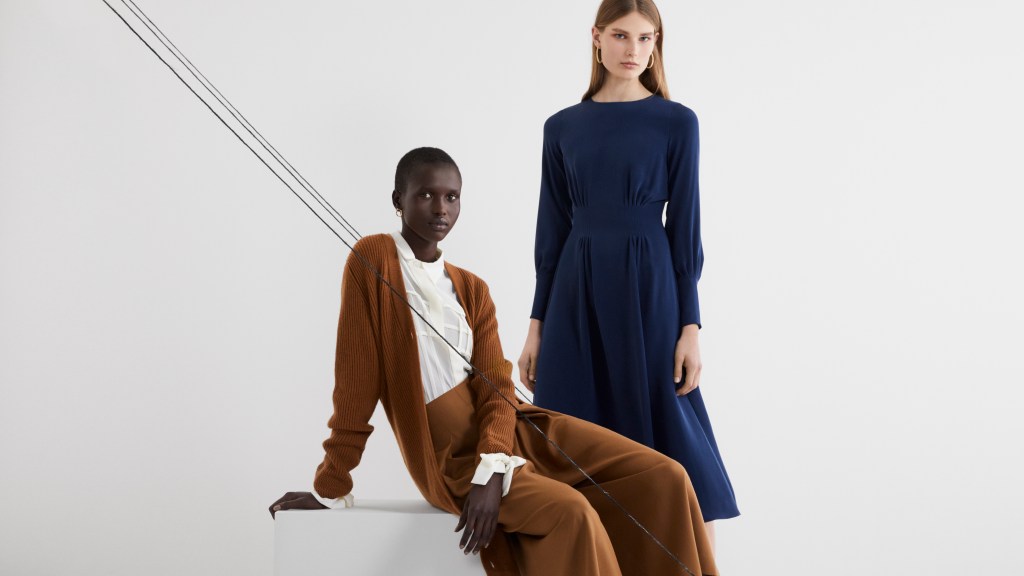 The capsule also relies on the information collected by YNAP’s massive data, allowing to perfect sizes and shapes in order to reduce waste and thus generating less returns. “The name of the project blends a storied profession with a modern tool,” Marchetti noted. It also relies on experience gathered through previous projects, such as the line unveiled in 2018 and called 8 by Yoox, which was driven by artificial intelligence. This followed Mr P, the in-house collection launched by Mr Porter in 2017.

Production of the capsule started in April 2019, but was stalled by the pandemic from March to August and was completed in September. All profits from the sale of the collection will be donated to The Prince’s Foundation to enable the charity to develop and deliver training programs that will help preserve traditional textile skills.

“There are fundamental values beyond marketing in this project, which bridges Italy and the U.K. in a spirit of collaboration at the time of Brexit,” said Marchetti, underscoring that YNAP is Anglo-Italian. “These are jobs that we cannot lose,” he added referring to the art of craftsmanship, expressing his pride and belief that it will be a blueprint for more sustainable collections.

Marchetti said the project is an “incredible launch pad,” since all of the 10 artisans have already found jobs in companies ranging from Ermenegildo Zegna and Max Mara to Off-White. “This gave one young person the confidence to even set up his own business and another is teaching sustainability at school,” Marchetti said.

The ready-to-wear capsule of women’s and men’s wear comprises 18 pieces, produced in a total of around 600 units.

Six Italian students from leading design school Politecnico di Milano’s Fashion in Process (FiP) research laboratory led the design of the collection, while British artisans were trained at Dumfries House, the headquarters of The Prince’s Foundation in Ayrshire, Scotland, producing most of the collection in the estate’s Textile Training Centre.

The artisans were bestowed a Modern Apprenticeship Award in Heritage Textiles in partnership with Glasgow Clyde College.

The knitwear was designed by the Italian artisans and manufactured at Johnstons of Elgin’s knitwear mill in Hawick, Scotland.

The artisans were granted exclusive access to five years’ worth of YNAP data on long-term preferences of the group’s 4.3 million customers and learned how to process image data and use AI visual recognition to inform the styles and silhouettes of their designs.

For example, in the women’s wear collection, details from the wide legs and midi lengths to the cinched-in waists and pussy bows were design choices that reflected customer preferences. In men’s wear, data was mirrored in a camel coat or navy trousers, as well as the drawstring detail at the waist of casual trousers. 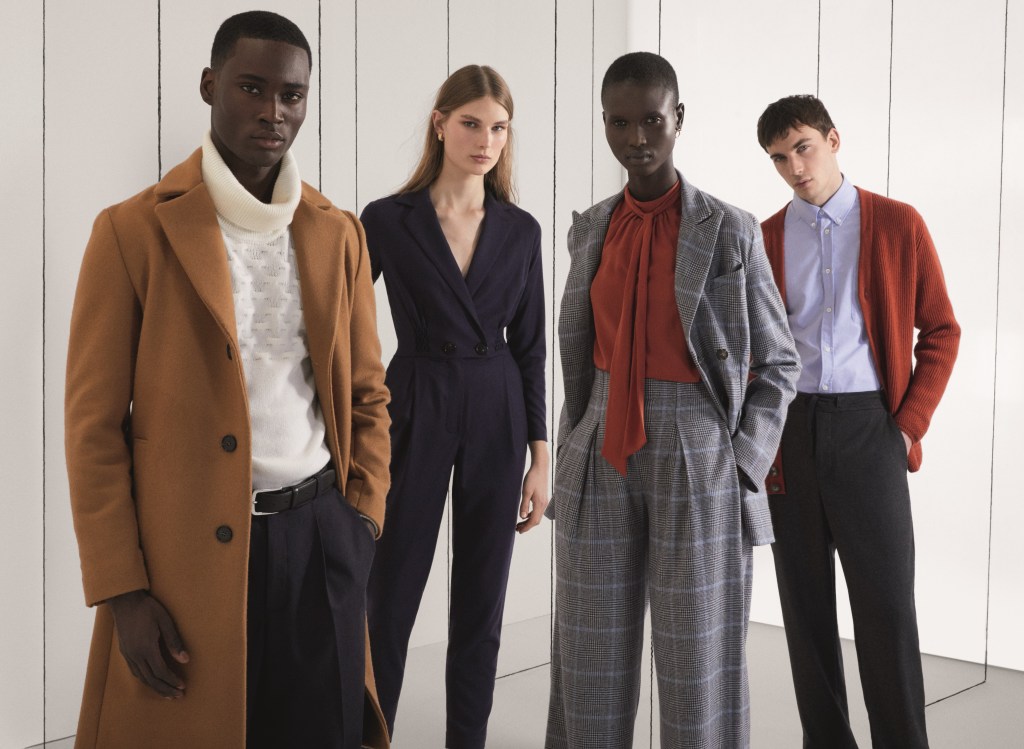 Created during the 500th anniversary of the death of Leonardo da Vinci, the legendary artist’s knots are a feature throughout the collection. His studies of drapery inspired the women’s wear, seen in folds, pleats, smocking, ties and bows. The men’s wear points to his fascination with architectural details.

Marchetti, who has championed sustainability since 2009, pointed to the Prince of Wales’ beliefs in sustainability for more than four decades. For this reason, the collection rests on cashmere and wool sourced from Scottish textiles firm Johnstons of Elgin that is fully traceable, and organic eco silk sourced from Centro Seta in Italy.

Natural and organic materials were prioritized, as was end-of-roll, and no synthetic fabrics were used in the collection. Each style is equipped with a digital ID, providing the story behind the product, its materials, the artisans who designed and made it, as well as care and repair recommendations for durability.

“Designed in Italy and crafted in the U.K., this truly sustainable luxury collection illustrates the vast possibilities of cross-border collaborations to tackle environmental challenges and train creative talents in these uncertain times and beyond,” Marchetti said.

The Modern Artisan project will be showcased at Michelangelo Foundation’s Homo Faber in 2021. 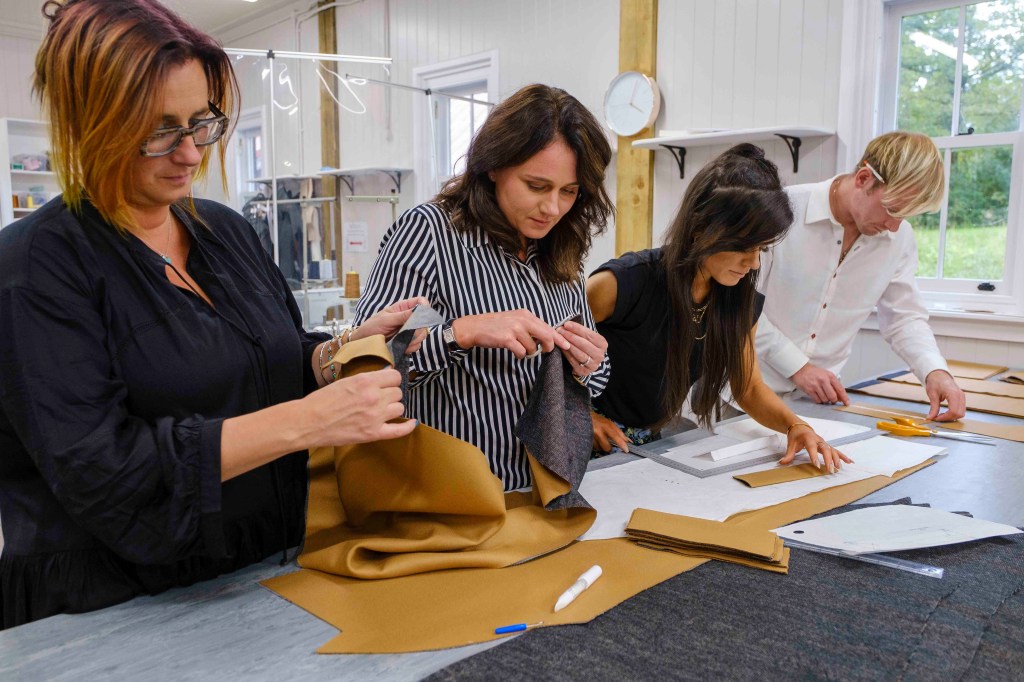