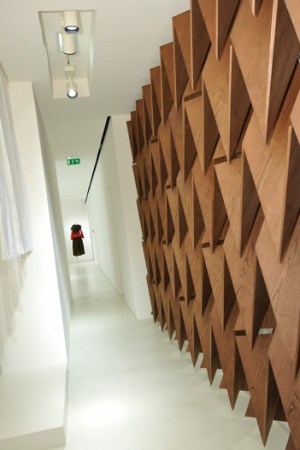 Architect Sophie Hicks said she wanted the 6,500-square-foot store to appear to “float,” using as its central feature a vast three-dimensional window blind made from rows of hollow, folded Shoji gami paper pyramids (a thin paper typically used for Japanese screens), suspended on wires like lines of flying seagulls.

“The view is more important from the outside,” said Hicks, describing how the installation allows passersby to snatch glimpses of the interior, a nod to the restraint of traditional Japanese aristocratic ladies.

The same abstract forms repeat on a wooden wall sculpture flanking one side of the store’s entrance, a narrow corridor that leads into a sparse white space populated with seven mannequins that float on metal poles. From there the store splits into two departments via a monumental curved white concrete staircase, with men’s wear housed in the basement and women’s wear and jewelry upstairs. The store also will stock unique designs in the coming months.

Keizo Tamoto, Yohji Yamamoto’s executive vice president and chief executive officer, said he expects the store to generate sales of around 1.5 million euros, or about $1.9 million at current exchange, in its first year.

Yamamoto’s Rue du Louvre store, which, until now, has housed the men’s and women’s collection and Y’s brand, is the brand’s most successful store globally, Tamoto said, noting that the unit now will be devoted to Y’s. The firm also owns a neighboring Y-3 store on Rue Etienne Marcel.

Tamoto said the company began working on the flagship project two years ago, prior to the economic meltdown. “This is just a coincidence. And Paris will not disappear with this climate, I hope,” he said, adding that there are no more retail ventures planned for the foreseeable future.

Aside from the store’s design, service also will play an integral role in its identity, from brushed steel rails that salespeople will fill with clients’ selections and wheel to their changing rooms to scattered armchairs for relaxing and cream virgin wool carpeting in the fitting room areas. Jewelry is stored in glass cabinets in a carpeted annex adjoining the main women’s wear space, with the store’s layout based on a network of airy white boxes, a retail signature for the brand.

“When I first met Yohji, I thought, this man likes a white box and I like a white box, too, so let’s not try to be clever. We’ll do a white box and he will feel comfortable,” commented Hicks. “Yohji Yamamoto is Japanese, but on one level he is Parisian, too. He has been working here for so long. So I wanted his store to float in Paris: To be a Japanese world with a subtle feeling of Paris in [its] atmosphere.”