Jason Wu, 3.1 Phillip Lim and Thakoon are among the fashion companies looking to Asia, the Middle East and Europe for growth.

By Marc Karimzadeh on May 4, 2010
View Slideshow 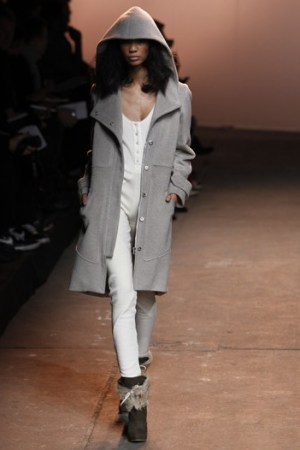 Where once designers used to live by the iconic Liza Minnelli lyric and come to Seventh Avenue to build their businesses in New York and the U.S. before tackling opportunities abroad, the city’s young designers are now thinking globally almost from the moment they launch their labels.

And these days, they see the biggest potential in the East — from China to South Korea, India to the Middle East, including the Emirates and Lebanon. Many said Europe and Russia remain challenging, given their economic turmoil, while markets such as Brazil are still relatively untapped even though major luxury brands are flocking there.

To build their overseas presences, designers have either partnered with sales showrooms in other fashion capitals or started to go to Paris during the city’s fashion weeks to show and sell their collections to buyers who don’t make the trip to New York.

Jason Wu, for instance, plans to travel to Paris in July during the couture season to present his resort collection to European and Asian stores in town at the time. Currently, 30 percent of his sales are overseas and, of those, London, where he sells to Browns, Selfridges, Harrods and Net-a-porter, and Japan, with stores like Estination and Designworks, are the largest, accounting for 10 percent each. And Wu takes these markets as seriously as his American business. For instance, the designer just created a limited edition T-shirt collection for Tokyo’s Designworks with prints from his fall 2010 collection.

Asked about his fastest-growing market, Wu, who had wholesale sales of $10 million last year and projects $14 million for this year, pointed to China, “especially Beijing. It’s an emerging market in terms of demand for luxury goods. In designer clothes, it has always been the big players like Chanel and Louis Vuitton. Young designers are a new thing for China, whereas they are not as new for Japan or Korea.”

Alexa Adams, who designs the Ohne Titel line with Flora Gill, concurred. “China has a whole new group of people with money that can afford to buy designer clothing, and they are open to new designer labels,” she said.

Robert Burke, head of the Robert Burke & Associates consulting firm, works on projects in China, the Middle East, Brazil, Kazakhstan and Korea, and said there has been interest from all those countries in emerging American talent. “They see the talent coming out of the U.S. as a potentially very strong business, and the young designers see opportunities there,” Burke said. Within them, “Korea and China are the two that seem to be the most focused in the sense of interest in buying from young designers.”

And these designers are eager to sell to overseas stores — partly because they have little choice if they want to survive. The worldwide recession hit the U.S. retail sector particularly hard, prompting stores from Saks Fifth Avenue to Neiman Marcus to cut their number of vendors or the amount they buy from individual designers. In addition, a slew of specialty stores, long a launchpad for young talent, went out of business.

So, left with little choice, they got on a plane.

“American designers, for a long time, had difficulty breaking into international markets,” said Elana Posner, Peter Som’s business partner. “I think this generation of designers learned from that.”

Wen Zhou, chief executive officer and president for 3.1 Phillip Lim, said, “Especially with the crisis in the economy, you have to be in as many countries as soon as possible in order to have a viable business. It’s no longer this idea that a designer comes out with a collection and makes it in the U.S., and then in the rest of the world. The world is much smaller now, and you have to almost build a global brand instead of a U.S. brand from Day One.”

When 3.1 Phillip Lim launched in fall 2005, the line was sold in 27 countries. Today, it is sold in 49 countries, and the designer projects wholesale sales of $50 million for this year. International accounts for 45 percent of the designer’s total business, of which Japan and the U.K. represent 10 percent each. Lim also has a significant business in the Middle East, selling to stores such as Plum in Beirut, Beymen and Harvey Nichols in Istanbul and Boutique One in Dubai.

“The Middle East is the fastest growing for us,” Zhou said. “In Europe, Italy is our other fastest-growing market. Italy has many small towns, and in every single town, there is that beautiful boutique that people go to locally and they embrace fashion. While Italy is not huge, the amount of boutiques available for us is interesting.”

With its Singapore partner, Club 21, 3.1 Phillip Lim is planning to open a freestanding store in August. Zhou added China is expected to grow into one of the most important markets for Lim in the future, and to that end, the designer is planning to stage a fashion show in Beijing in October to present the spring 2011 collection.

Posner at Peter Som agreed that Asia is among the fastest-growing markets. “Japan and Korea have always been strong, and Taiwan and Singapore are starting to be strong,” she said, adding that, in China, “main brands have opened their stores, and now specialty stores are starting to open and they will want European and American brands.”

Maria Tomei Borromeo, Thakoon’s ceo, said that, since launching the collection in 2004, the business has been roughly evenly split between domestic and international. Overseas accounts for 45 percent, while the U.S. represents 55 percent. By region or country, Asia accounts for 14 percent, which includes “a significant business” in Japan, Hong Kong, the Philippines and Korea. Russia and the Middle East are about 10 percent of Thakoon’s business and Europe is 21 percent. “A lot of focus and attention are being paid to what is going on in New York, and our brand is coming up at a time when a lot of interesting things are happening in New York,” Tomei Borromeo said of international demand for the brand.

Many designers also cited developments on the Web as another instigator for global growth. It not only allows potential overseas customers to familiarize themselves with emerging U.S. talent through the click of the mouse, but also makes it easier for designers to communicate with their international stores through e-mail, Skype, BBM and other tools of online communication.

“Because of technology, five years ago, if you were a young designer, wherever you were based, it was very much about growing there slowly, and eventually international people caught up,” designer Prabal Gurung said. “But because of such things as Facebook, Twitter, the way the shows are going viral, information is instant. When you do a runway show, or a celebrity wears your clothes, it can be picked up by everyone around the world.”

Brian Reyes said, “I think the world is so focused on fashion now, through the Internet or entertainment at large, that the idea of American style has penetrated more markets.”

Stephanie Cozzi, president of Brian Reyes, agreed that technology played a key role in changing the perception. “It wasn’t as easy five years ago, when no one had a BlackBerry,” Cozzi said. “Until very recently, it was really the specialty stores that drove overseas business and it was all about relationships. Now you can BBM your buyer in London as easily as your best friend around the block. Technology has really taken down the barriers.”

That said, there are still benefits and hurdles for American designers looking to build their businesses abroad.

Joseph Altuzarra, who designs in New York and Paris, said he benefits from doing business in Europe.

“We produce in Italy and all of our fabric mills and all of our suppliers are in Italy, as well as some in France,” he said. “On a practical level, we pay everything out in euros, so building a euro business outside of the U.S. is a priority for us because it helps us balance what we take in versus what we pay out.”

Doo-Ri Chung said, “[With] the amount they mark up with the duties [in Europe], you can’t be as competitive. You don’t really have that problem in the Middle East, and so we are able to open up more freely. For us, the emerging market had been Russia, but we felt that, with the recession, a lot of accounts have gone out of business, or had their budgets slashed. The Middle East market has remained stable for us.”

For Iranian Behnaz Sarafpour, her native Middle East represents the largest overseas region, and she sells to countries such as Dubai, Saudi Arabia and Kuwait, followed by Russia. She also has seen growth in Turkey and Korea. “There is interest in American fashion from other countries, regardless of the issues there are with exporting American goods,” said the designer.

Sometimes, however, styles need to be adjusted for local preferences and religious considerations, particularly in Saudi Arabia, where many designers have to lower the hems of their dresses to adhere to local dress codes. But if it gets them more business, so be it.

“It’s a huge playing field, with countries like India and China and a lot of other Asian countries and the Middle East,” Gurung said. “It’s not just domestic. You can’t just focus on domestic and think you can be successful.”