WWD caught up with the designer before he presented his resort collection, in which he mashed up the breezy yachting life with the humble poppy flower. 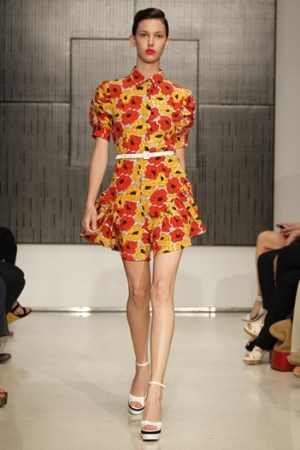 Early Wednesday morning, as much of New York woke up to reports about gal-on-tour Sarah Palin sharing a slice of pepperoni pie with Donald Trump, Yves Saint Laurent’s Stefano Pilati was fixated on a completely different kind of combo. He was about to present his resort collection, one in which he would mash up the breezy yachting life in all its striped, nautical glory with the humble poppy flower, the latter a motif pulled from Saint Laurent’s Forties-inspired collection from 1971. “There was a shoe with a poppy on the ankle,” he explains. “I’ve always been kind of obsessed, but I thought I’d never use it for a fashion show. But then I had a book, which had a lot of poppies, and I went to the [Italian] countryside and there were a lot of poppies.”

It’s now less than an hour before the show start — his second runway outing for resort after last year’s affair at the French Consulate in New York. He’s sitting inside a small conference room on the 20th-floor offices of the Haunch of Venison gallery (though we’ll soon be booted out by a buyer eyeing a Warhol that’s hanging on the wall). Just outside the door, past reception and a cluster of black-clad publicists, there’s an exhibit room filled with works by Venezuelan artist Jésus Rafael Soto — that’s the space where Pilati’s show will take place. And, no, the surrounding art does not hint at what’s to come from his resort lineup. And he didn’t choose the place because he loves art — though he does and has a private collection of drawings, some by Warhol, and African masks. “It’s a gallery that belongs to Christie’s,” says Pilati. “Last time I did it at the French Consulate to insist on the French identity. What I liked now was the idea to show in a space that’s not corporate, but more representative of our group. It’s our space, in a sense.” Pilati doesn’t mean “our” as in YSL; he’s talking about parent company PPR. Christie’s is privately held by François Pinault via his private investment holding company Artémis.

But back to that poppy flower, which Pilati served up in myriad ways, from abstract prints on a jumpsuit-cum-gown to petal appliqués on a summery frock. The motif, he says, nearly didn’t make it into the collection. After immersing himself in all things floral, his assistant began showing him some marine-themed jewelry designs — starfish, ropes and the like. “They looked great,” he says. “I thought we could do them in rubber and add Swarovski crystals, but what was I going to do with the poppies? Then I was like, ‘You know what? I’m going to use both.’ I went for it. Why not?”

Apparently, that’s a new motto Pilati has cottoned to lately, which leads to his resort collection’s other inspiration: traditional cruise elements. The starting point here is a series of photos he pulled from the Rive Gauche archives, over a period from 1972 to 1982. “The models were all wearing sailor berets, gold buttons on blazers, anchor [patterns] and stuff,” he says, “and sheer stockings and pumps — and they were all made up! There’s no way they were going on a yacht. It’s like they were going to lunch at the Four Seasons or to the office on Avenue George V. What amused me was the fun aspect. There was a lightness about it. Loulou de la Falaise stayed with me once when I was preparing a show, and she was never like, ‘Yes, I like it,’ or, ‘No.’ It was more about, ‘Why not?’ You know, why not dress like I’m going on a yacht when, in fact, I’m going to the office?”

If this fun factor resonates deeply for Pilati, it’s because the designer considers it an element missing from the industry today. “We can’t do certain things because we’re much more scared or doubtful about it,” he says. “I’m not saying it’s bad, but in business when you apply certain rules, they don’t necessarily give you much space for fun, you know? I think the success of the McQueen exhibit is that free spirit, the gesture was grand, and not linked at all to any form of business rule or whatever.” That said, Pilati’s not about to succumb to any delirious flights of fancy. “My career is linked to the evolution of fashion,” he says. “Either you decide to be an outsider, and that’s your choice, or you play by the rules.”

When asked why he chose a runway show rather than a by-appointment presentation, Pilati notes he’s “a fashion-show passionate. There’s nothing that represents the collection better than seeing it on girls on a catwalk. My fashion has never tried to be editorially oriented. My research was more subtle, on the edge to the more boring.” He catches himself at the B-word, laughs and offers a clarification. “When I say boring, I mean in the sense of not flashy,” he notes. “You have to wear my clothes, then you feel the difference. People spot you because of the overall sense of elegance and not because you have, I don’t know, five embroideries on your jacket and wings in the back.”

That’s the sort of confidence that comes with 11 years-and-counting at YSL, seven of which he’s been at the helm. Of all Saint Laurent’s successors, Pilati has remained at the house the longest. Which isn’t to say that it’s been a completely smooth ride. Pilati’s first collection, for spring 2005, was reviewed harshly. And just earlier this year, there were rumors he was being ousted. But the company denied them and the designer has obviously moved on. “I took the mission of YSL and I know I accomplished certain goals,” he says, while acknowledging the extra pressure of the name on the label. “To tell you the truth, it’s more coming from outside than from myself. I never thought I could design better than Saint Laurent. I mean, how can you top him? At the same time, you don’t want to lose the confidence in yourself. You are creative, you have proved it.”

And what of the critics? “I try to understand where the negative reviews are coming from,” Pilati says. “I’m very surprised when criticism comes from a very shallow approach. We can discuss it if there’s something you don’t like and that’s fair enough, but what I don’t like is when they say, ‘Oh, it didn’t look great.’” He pauses for dramatic effect. “What didn’t look great, from what sense? From a pattern point of view, from a fabric point of view, what?” A particular bone he has to pick is the critique that his fabrics look heavy. “Sometimes for winter, the look is heavy, but the fabric is really light,” he explains. “And the work to achieve that is, I mean, it’s research, it’s work.”

Pilati is just as vocal when it comes to the blogging crowd. “I pay attention to all of them and I’m very scared,” he says. “Because who are these people? I would like to sit with them and ask them where they come from. Because it’s very easy to judge from your bed. At the same time, I’m fascinated. I’m fascinated by this era and this medium. If people are thirsty about fashion, I like to have a dialogue, but now it’s not a two-way dialogue; it’s a one-way dialogue.”

When it comes to a designer’s relationship to a brand, Pilati has firm ideas. “You have to find a balance,” he says. “I never took it like a subjective path. Never forget you are in the most elegant house that ever existed in fashion, so I found it necessary to also be elegant in terms of choices. To put myself before the brand, I would have found tacky. That’s why you don’t see the credit ‘Stefano Pilati for Yves Saint Laurent.’

“It’s important that Yves Saint Laurent keeps its integrity and that a designer doesn’t overwhelm what the history is,” he continues. “I do what I do because I believe in it, not because I have to. I don’t want to sound sentimental, but it comes from a love and passion.”

As if on cue, stylist Joe McKenna pulls the designer away to the runway rehearsal.