More than 50 looks from the designer's archive go on show at the Bowes Museum. 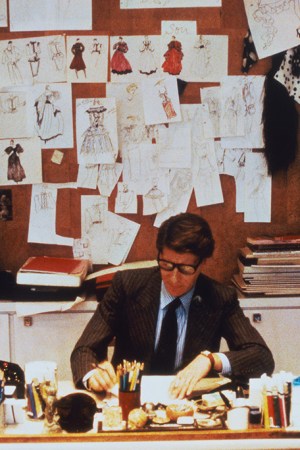 Past the pubs, bakeries and tea shops in the historic market town of Barnard Castle, England, a retrospective of Yves Saint Laurent’s career has opened at the Bowes Museum, a grand 17th-century house incongruously built in the style of a French chateau, 260 miles north of London.

It may not be the most obvious location for the late designer’s first U.K. retrospective, but the reason for holding it there is simple: “They asked us,” said Pierre Bergé, president of the Fondation Pierre Bergé — Yves Saint Laurent, which supplied more than 50 looks from its archive, as well as sketches, toiles, and ephemera. “They’re very nice people, it’s a very nice museum. So, why not?”

“Yves Saint Laurent: Style Is Eternal,” which opened over the weekend and runs until October 25, was curated by Joanna Hashagen, the Bowes Museum’s fashion curator, who said she was so determined to have the retrospective at the museum that she “stomped up the Avenue Marceau” (home of the foundation) to make her pitch.

A relationship had already existed between the two institutions: The museum had loaned a pair of Canalettos to the Jacquemart-André Museum in Paris, where one of Hashagen’s colleagues had a chance conversation with a member of the Fondation, who asked if the Bowes would be interested in hosting a Saint Laurent exhibition at its newly opened fashion gallery.

“It was just being in the right place at the right time,” said Hashagen. “I had been thinking about doing a show on a French couturier for a while because, after all, the Bowes collection was created by Josephine Bowes, a very fashionable Parisian woman who dressed at Worth.”

The show stretches across three rooms and centers on five themes that highlight the designer’s inspirations, creative processes and influence on fashion.

A film of the 2002 retrospective fashion show held at the Centre Pompidou to mark Saint Laurent’s retirement from haute couture opens the exhibition, while a separate “Alchemy of Style” narrative illustrates the designer’s creative process. The latter features the original paper dolls — Bettina and Suzy, named after Bettina Graziani and Suzy Parker — that an adolescent Saint Laurent would use to create the collections he showed his sisters, who would play the roles of clients and place orders.

A shelved wall features hatmaking materials and wooden blocks, while a glassed-in space shows calico toiles and examples of embroidery and embellishment from the famous Lesage atelier (now owned by Chanel) as well as a white organdy gown embroidered with pineapples from the 2001 couture collection.

The five themes of the show — Haute Couture, Masculin/Féminin, Transparence, Art and Spectaculaire — are visually bullet-pointed through the placement of one Saint Laurent archive look in each of the five glass cases containing the museum’s permanent collection, positioning the designer amid fashion’s historical continuum. Each look is brought to life with films showing the original catwalk footage and collection boards with fabric swatches.

Masculin/Féminin is illustrated by the first black wool pinstripe double-breasted pantsuit from the spring 1967 couture collection and accompanied by a First World War military uniform and other historical pieces. The saucy little black dress from the controversial fall 1970 couture collection, with its revealing panel of Chantilly lace at the back, underscores the Transparence theme, and sits alongside a lace shawl worn by the Empress Eugénie of France, consort to Napoleon.

The final room contains mannequins dressed in some of Saint Laurent’s greatest hits. His first tuxedo, Le Smoking, from the fall 1966 collection, is there, as is the safari jacket from the spring 1968 Rive Gauche collection. The latter was made famous by the picture of Verushka with a rifle slung over her shoulders, shot by Franco Rubartelli for Paris Vogue, which is also on display, as is the fall 1968 gown of sheer black silk with feathers at the hips that left little to the imagination.

Another grouping demonstrates the influence of art and artists on Saint Laurent’s work, including the color-blocked Mondrian dress and pieces inspired by Georges Braques, Matisse and van Gogh.

One lineup of dramatic looks is testament to the designer’s theatrical bent, including a piece from his famous fall 1976 “Opera Ballets Russes” collection featuring a sable-trimmed green velvet vest worn with a blue-and-gold chiffon blouse, a voluminous full-length skirt, and an opulent stole with colored feathers and gold threads.

There are also the pieces Saint Laurent created during his tenure as the head of Christian Dior, the role he ascended to at age 21, following the death of Dior. Among this grouping is a pink silk cocktail dress that was rediscovered at the Musée de la Mode de la Ville de Paris during the preparation for this exhibition. It was confirmed to be the “Zéphirine” dress that was designed by Saint Laurent for the fall 1958 Christian Dior couture collection that Princess Margaret saw during a private runway show at Blenheim Palace. A nearby screen shows black-and-white Pathé footage of the dress in action on the model Victoire and the designer meeting the princess.

“I remember the time when Yves went to Blenheim. I did not go with him. He was so shy and was asking me, ‘How can I do this?'” said Bergé at the exhibition’s opening party. “The pink dress was not Yves’ style. It’s not a beautiful dress; it’s very old-fashioned. We had to wait a few more years to have the real Saint Laurent style.”

Nonetheless, it’s the first time the dress has been exhibited and a boon for the museum, which hopes the high-profile show will draw a new audience to its galleries.